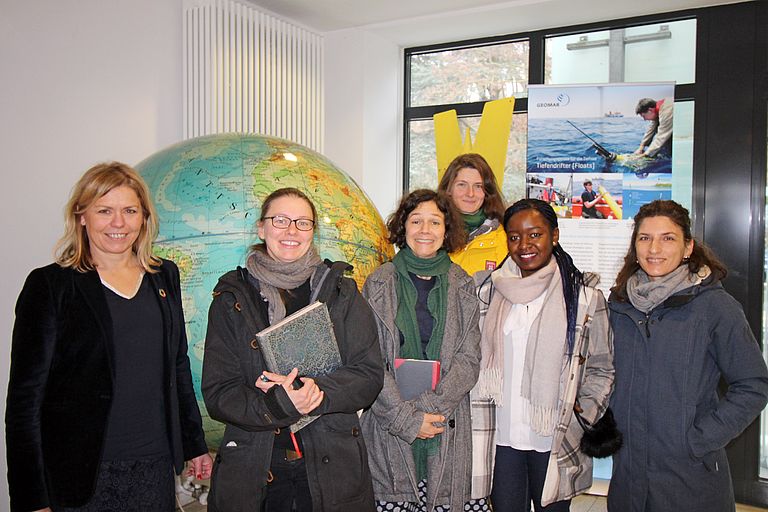 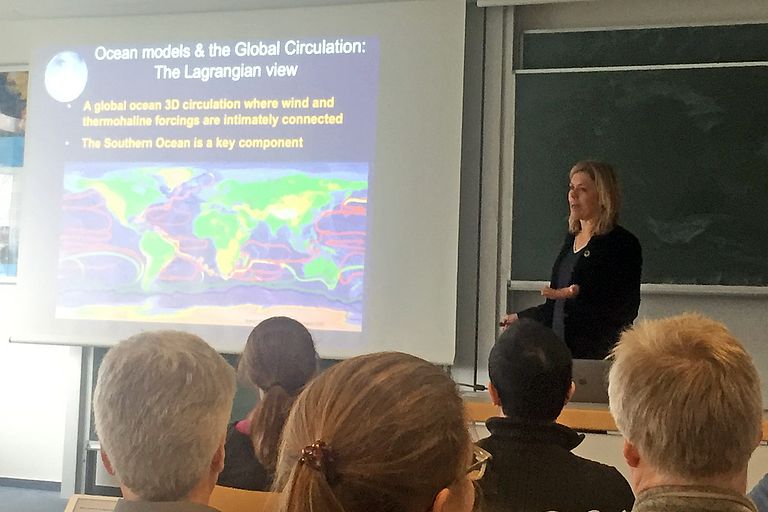 A successful mixture of ocean observations and modeling

22 February 2019/Kiel. The ocean covers 71 percent of the Earth’s surface and it is perhaps the most important element for our climate system. Due to the continuously rising greenhouse gases, the ocean is undergoing significant changes. The ocean is heating up by ingesting more than 90 percent of the heat surplus due to human activities, acidifying and losing oxygen. Where these changes take place, their pathways in the ocean interior and how they precisely impact weather, climate, and marine ecosystems are topics of current research. Against this background, Prof. Dr Sabrina Speich from the Ecole Normale Supérieure in Paris works on improving the understanding of these processes through enhanced and coordinated ocean observations and numerical simulations. In particular, the benefits for society are in the focus. This week, she presented her work as part of the Marie-Tharp Lecture Series for Ocean Research at GEOMAR.

Prof. Dr. Sabrina Speich first studied physics at the University of Trieste, Italy (diploma 1989) and received her Ph.D. in Physical Oceanography at the University of Pierre and Marie Curie in Paris, France, in 1992. She then worked as a postdoctoral fellow at UCLA in Los Angeles, USA, before returning to Paris as a postdoctoral fellow at the CNRS, in 1995. In the same year, she became an assistant professor at the University of Western Brittany in Brest, France, where she held a full professorship from 2009. In 2014, she accepted a professorship in Oceanography and Climate Sciences at the Ecole Normale Supérieure in Paris. Her research focuses on scale interactions in the ocean and its dynamic interaction with the atmosphere, especially on the meso- and submesoscale. In particular, she pays attention to the effects of global warming on ocean circulation, especially in the Atlantic, on the Earth's climate in general and on marine ecosystems. A special feature of Prof. Speich is her worldwide acknowledged expertise not only in ocean modeling but also in the organization of extensive in-situ observational programs. In her research projects, she has been involved in the international Argo Profiling Floats program right from the start. She coordinates various monitoring programs like GoodHope and BONUS-GoodHope and serves as Vice Chair of the Executive Committee of the South Atlantic Meridional Overturning International Initiative (SAMOC) and Co-Chair of the Atlantic CLIVAR Panel. She is also one of the CoPIs of the H2020 AtlantOS and the international EREC4A-OA projects. Furthermore, together with Bill Jones, she directs the TAOS review (Tropical Atlantic Observing System). Since 2017, she has also been a member of the GEOMAR Scientific Advisory Board.

In the MTLS, she discussed how measurements and simulations complement each other to observe the ocean. The advantages of combining both, and why improving ocean observations is critical not only for science but also for society. She appealed to convince stakeholders to continue and sustain our ocean observation network
for a better understanding of the processes and to arrive at an internationally coordinated observation system similar to the operational radiosonde data network in the atmosphere.

The "Marie Tharp Lecture Series" is hosted by GEOMAR's Women's Executive Board (WEB). To this end, the WEB invites internationally renowned female scientists to present their scientific work in Kiel, but also serve as a model for young female scientists. As in the past lectures, a get-together takes place for women only after the public lecture, for the first time organized by the postdoctoral researchers themselves. There, young researchers can exchange with more experienced colleagues and discuss possible career paths.