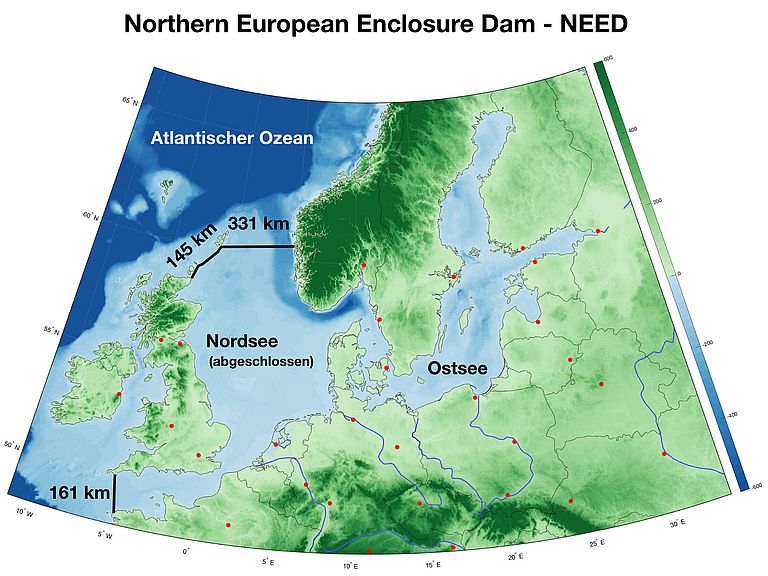 Map of the North Sea with the two dam projects. From Groeskamp / Kjellsson, 2020).

17 February 2020/Kiel. Assuming the world community does not succeed to stop global warming in the long term. Can a gigantic dam that protects the entire North Sea prevent flooding of the neighbouring countries? Two scientists from the Netherlands and from the GEOMAR Helmholtz Centre for Ocean Research Kiel have investigated this option in a feasibility study, taking into account not only technical and financial requirements, but also environmental impacts and socio-economic effects. The work has now been published in the Bulletin of the American Meteorological Society (BAMS).

It is the year 2500. In the past 500 years mankind has not succeeded in substantially reducing the emission of greenhouse gases and thus the warming of our planet. The sea level has already risen by several meters, with a further upward trend. Can the lower areas of the North Sea countries still be protected? Could a gigantic dam that turns the entire North Sea into a large lake still prevent this? Two scientists from the Netherlands and from the GEOMAR Helmholtz Centre for Ocean Research in Kiel have now examined this option in detail. They come to the conclusion that the construction of such a huge dam structure could indeed be an option rather than continuing to defend a much longer coastline with many individual projects.

At the heart of the project are two dams, one 161 km long, in the western part of the English Channel between Brittany and Cornwall and a second, almost 500 km long, in the northern North Sea between Scotland and Norway. The average water depth is 85 metres in the area of the English Channel and 127 metres in the northern North Sea with a maximum of more than 320 metres. In addition to the gigantic quantities of material that would be required to construct these dams, pumping stations would also be needed to pump the river discharge of the enclosed area into the Atlantic. Here, the authors calculate at about 40,000 m3 per second. The most powerful pumping stations to date in New Orleans and at the Ijsselmeer dam in the Netherlands are capable to pump around 500 m3 per second. According to the authors, the costs are estimated by today's standards to be between 250 and 500 billion euros, assuming a construction period of 20 years. That would require investments of between 0.07 and 0.16% of the annual gross national product of the 15 riparian states.

“By our present standards, the scale of such a project sounds completely inconceivable”, says Prof. Joakim Kjellsson, Assistant Professor in Maritime Meteorology at GEOMAR and co-author of the study. “Apart from the technical challenges of such a project, it would of course have massive implications for the fishing and shipping industries, not to mention the influence on the marine ecosystem of the North Sea and beyond”, Kjellsson continues. Nevertheless, such a system, if technically feasible at all, could be more economical than individual coastal protection measures in the 15 riparian states, according to the authors.

“We do not really think that such a project should be implemented”, says Prof. Kjellsson. “We would like to stress that the best option is to take action against climate change and to prevent such a solution from becoming necessary at all”, the Swedish scientist says. “We also wanted to show the immense challenges we will face if we do not succeed to get global warming under control in the coming decades. Then future generations will have to deal with problems of this magnitude, or huge areas of land will become uninhabitable and millions of people will have to move inland”, warns Prof. Kjellsson.

Map of the North Sea with the two dam projects. From Groeskamp / Kjellsson, 2020).