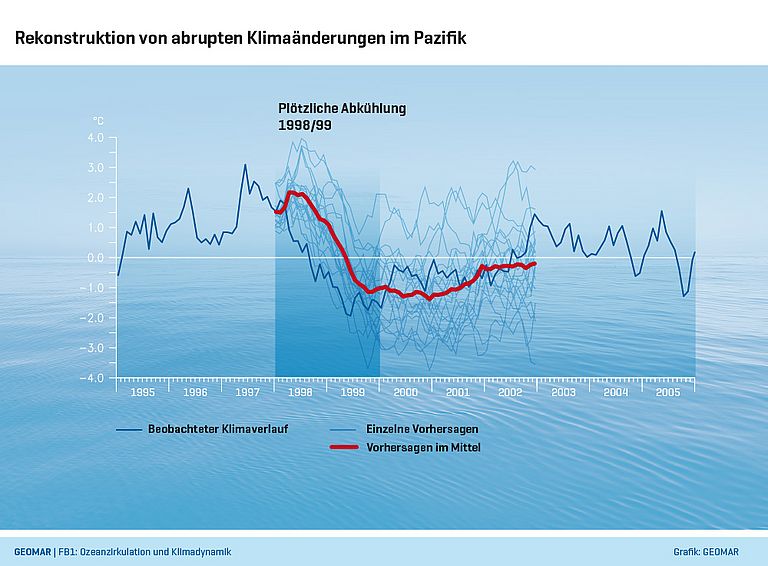 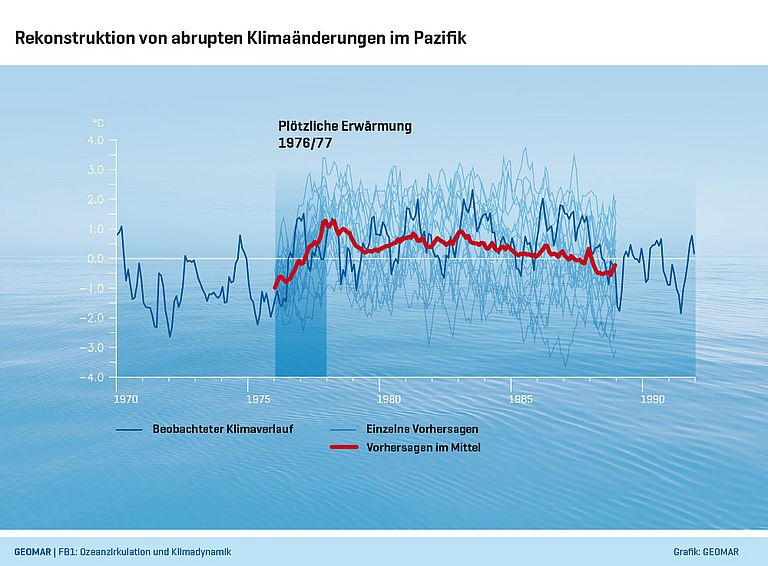 The Potential for Successful Climate Predictions!

August 22, 2013/Kiel. Will there be rather warm or cold winters in Germany in the coming years? We may have a long way to go before reliable forecasts of this kind can be achieved. However, marine scientists, under the auspices of the GEOMAR Helmholtz Centre for Ocean Research Kiel, recently managed to successfully hindcast climate shifts in the Pacific. These shifts also have a profound effect on the average global surface air temperature of the Earth. The most recent shift in the 1990s is one of the reasons that the Earth's temperature has not risen further since 1998. The study, published in the online edition of Journal of Climate, shows the potential for long-term climate predictions.

What happened in the years 1976/77 and 1998/99 in the Pacific was so unusual that scientists spoke of abrupt climate changes. They referred to a sudden warming of the tropical Pacific in the mid-1970s and rapid cooling in the late 1990s. Both events turned the world's climate topsy-turvy and are clearly reflected in the average temperature of the Earth. Today we know that the cause is the interaction between ocean and atmosphere. Is it possible to successfully predict such climate shifts? This is the question that scientists, under the auspices of the GEOMAR Helmholtz Centre for Ocean Research Kiel, pursued. Using a coupled model of the ocean and the atmosphere, they were able to successfully replicate these events.

"The ocean plays a crucial role in our climate system, especially when it comes to fluctuations over several years or decades," explains Prof. Mojib Latif, co-author of the study. "The chances of correctly predicting such variations are much better than the weather for the next few weeks, because the climate is far less chaotic than the rapidly changing weather conditions," said Latif. This is due to the slow changes in ocean currents which affect climate parameters such as air temperature and precipitation. "The fluctuations of the currents bring order to the weather chaos".

The researchers used a climate model, a so-called coupled ocean-atmosphere model, which they forced with the observed wind data of the last decades. For the abrupt changes during the 1970s and 1990s they calculated predictions which began a few months prior to the beginning of the observed climate shifts. The average of all predictions for both abrupt changes shows good agreement with the observed climate development in the Pacific. "The winds change the ocean currents which in turn affect the climate. In our study, we were able to identify and realistically reproduce the key processes for the two abrupt climate shifts," says Prof. Latif. "We have taken a major step forward in terms of short-term climate forecasting, especially with regard to the development of global warming. However, we are still miles away from any reliable answers to the question whether the coming winter in Germany will be rather warm or cold”. Prof. Latif cautions against too much optimism regarding short-term regional climate predictions: “Since the reliability of those predictions is still at about 50%, you might as well flip a coin".