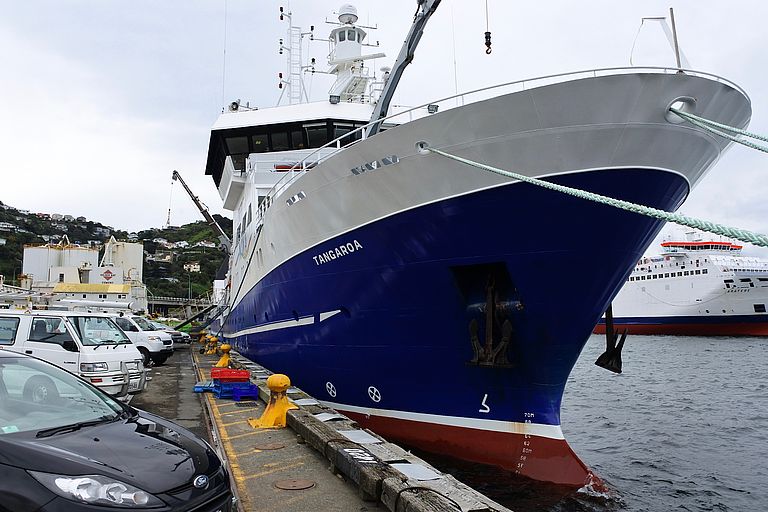 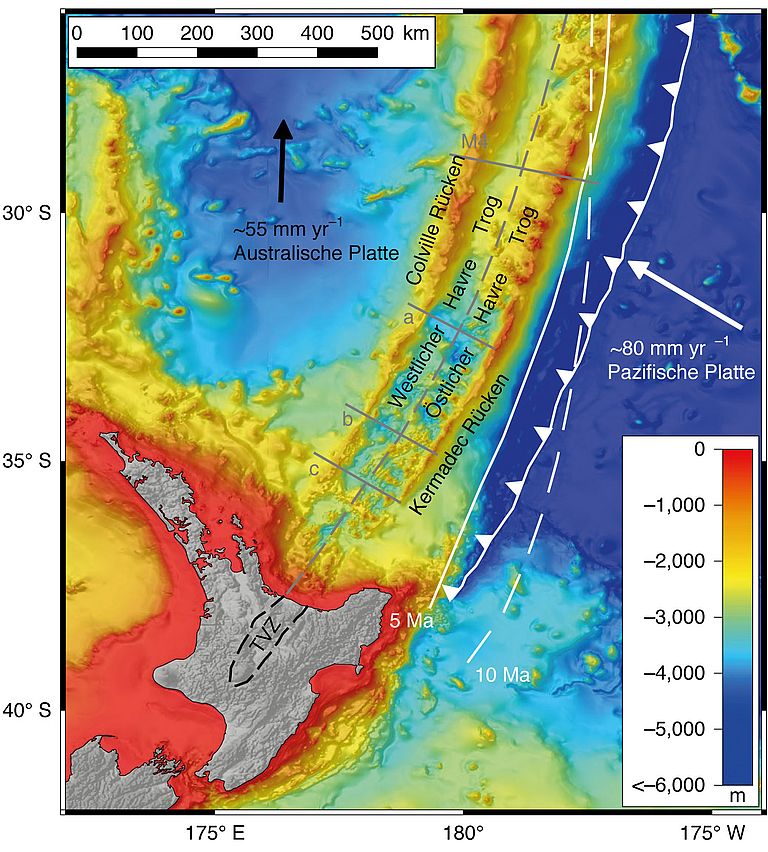 Map of the research area north of New Zealand. After Tontine et al. 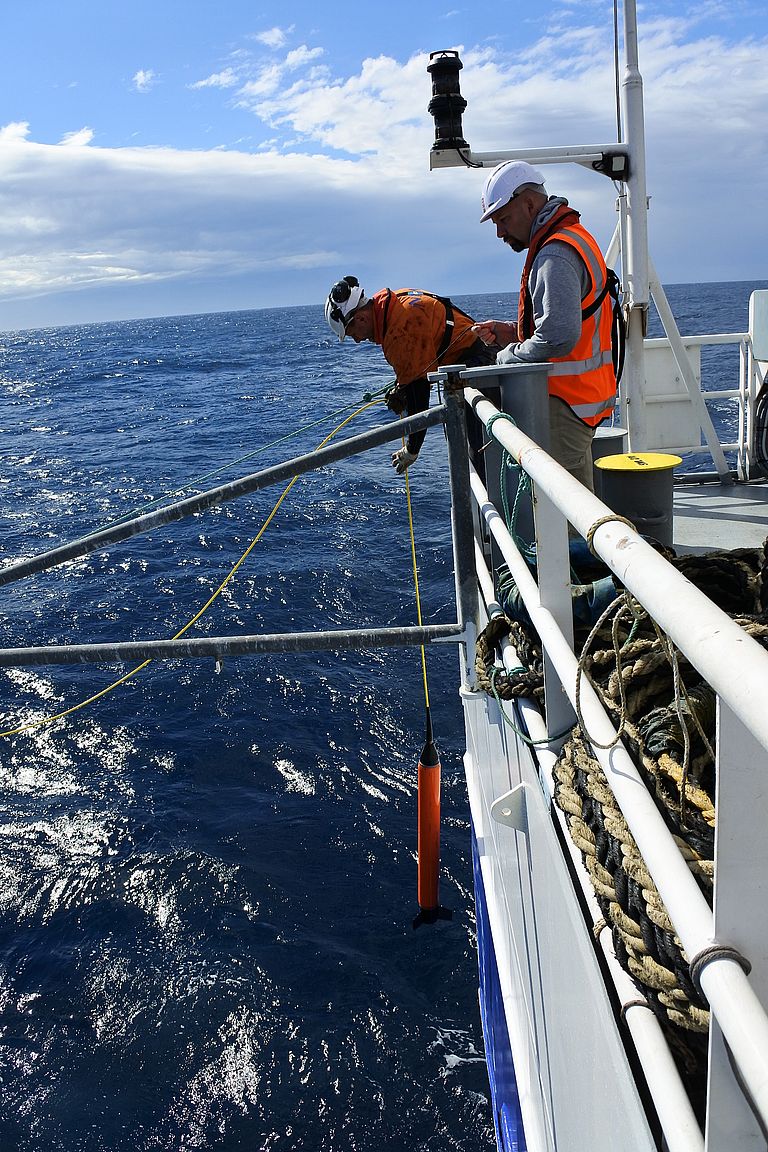 Retrieval of the magnetometer onboard the New Zealand research vessel Tangaroa during the Colville III expedition (TAN1611). Credit: Christian Timm 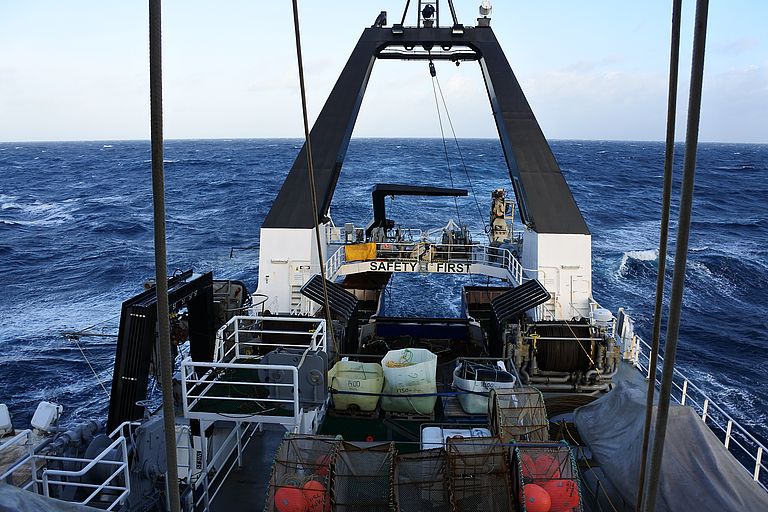 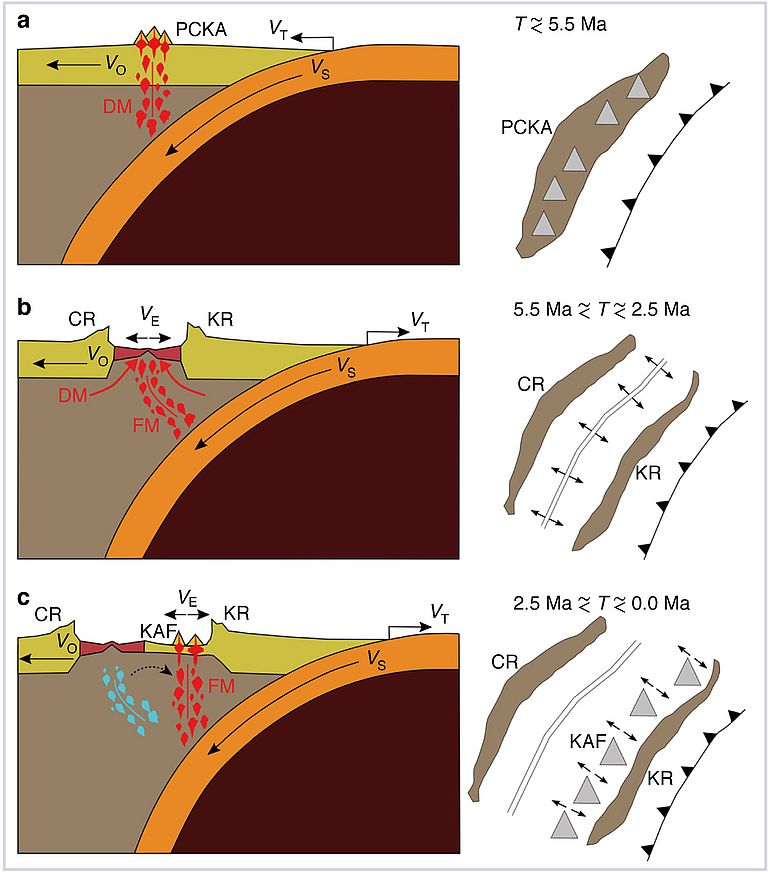 Schematic diagram of the tectonic processes in three pahases: a) up to 5 My, b) between 5 and 2.5 My and c) in the most recent period. Graphics from Tontine et al.

16.09.2019/Wellington/Kiel. One of the most active plate boundaries on Earth lies North of New Zealand. As part of the Pacific Ring of Fire one seafloor volcano joins another. A New Zealand-German research team has now decoded the genesis of this geologically still very young and extremely complex region. The study is published today in the international journal Nature Geoscience.

It's boiling on the seafloor. The geologically active zone that formed the central portion of the North Island of New Zealand continues for thousands of kilometers offshore to the north. One volcano joins another. This chain is part of a so-called subduction zone, where the westward moving Pacific Plate dives beneath the Australian Plate. The processes occurring here are complex, because the movement is very slow. Since many years scientists try to resolve the geological history of this region. A team of scientists from New Zealand and Germany with participation of the GEOMAR Helmholtz Centre for Ocean Research Kielnow published their results in a study that appeared in Nature Geoscience.

“We investigated the submarine Havre Trough, located between the Colville and Kermadec Ridges north of New Zealand” explains Christian Timm from GEOMAR, co-author of the study. “In this region new seafloor began to form 5 Million years ago via subduction of the Pacific Plate at the Kermadec Trench”. “We know since decades that the Taupō-Volcanic Zone stretches at a rate of few millimeters per year says Dr. Caratori Tontini, main author of the study. We also know that the Havre Trough is stretching similarly, but failed to understand why the outer boundaries of the Taupo Volcanic Zone did not align with the offshore Colville- and Kermadec Ridges”, continues Tontini.

“Our studies demonstrated that the Havre Trough consists of two separate parts: a now quiet western half and much more active eastern zone, that represent two stages of seafloor formation” explains Dr. Cornel de Ronde from GNS Science, co-author of the study and presently guest scientist at GEOMAR. “The older western region formed very rapidly similar to how seafloor is generated at the mid-Atlantic ridge. To the contrary the younger eastern part of the Havre Trough formed much slower allowing the emplacement of the active volcanoes of the Kermadec arc and the Taupō-Volcanic Zone, as we know it today” continuous de Ronde.

The study led by GNS Science in New Zealand used comprehensive geophysical datasets collected with ships, satellites and planes over the course of 15 years in close collaboration with institutes like GEOMAR.

“With this research we know understand much better how the unique landscape of New Zealand was shaped and can better predict how this dynamic region this planet will evolve in the future” concludes Dr. Caratori Tontini.

The research was funded by the New Zealand Government (Ministry of Business, Innovation and Employment), the European Union’s Horizon 2020 research and innovation program under the Marie Skłodowska-Curie grant agreement #79308 and by funds German Ministry of Education and Research (BMBF) to GEOMAR (SO192-1 Mango experiment).

Map of the research area north of New Zealand. After Tontine et al.

Retrieval of the magnetometer onboard the New Zealand research vessel Tangaroa during the Colville III expedition (TAN1611). Credit: Christian Timm

Schematic diagram of the tectonic processes in three pahases: a) up to 5 My, b) between 5 and 2.5 My and c) in the most recent period. Graphics from Tontine et al.