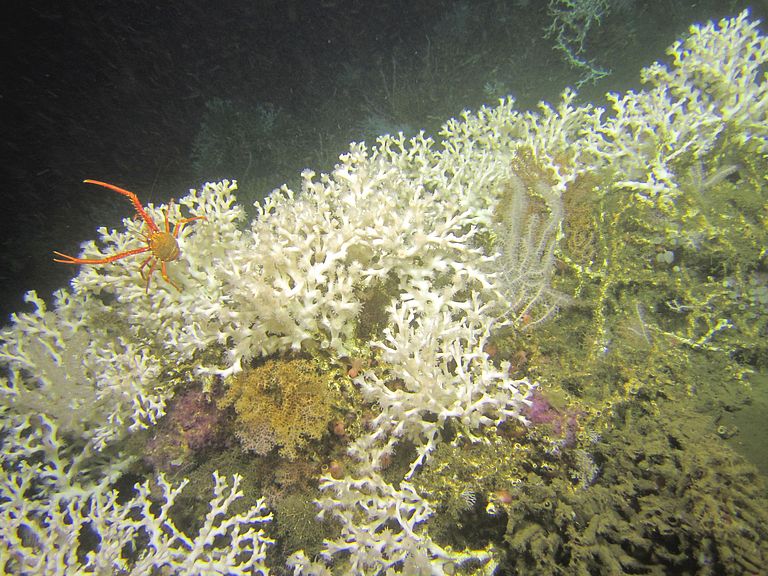 Cold water coral reef with Lophelia pertusa in 350 meter water depth in the centre of the oxygen minimum zone off Angola in the south­east Atlantic. Photo: MARUM - Center for Marine Environmental Sciences, University of Bremen

Corals in the deep sea adapt to extreme oxygen depletion

28 April 2020/Bremen, Kiel. Reefs of cold water corals are unique biodiversity hot spots in the deep sea. In order to grow, reef-building species like Lophelia pertusa need good environmental conditions. They react to changes in oxygen levels, temperatures and pH values in the water. However, during an expedition in the South Atlantic, a team of researchers from the MARUM - Center for Marine Environ­mental Sciences at the University of Bremen and other institutions discovered cold-water coral reefs that thrive in extremely oxygen-deficient and rather warm water. So these cold water corals can obviously adapt better than previously assumed. The scientists have now published their results in the journal Coral Reefs.

The cold-water coral Lophelia pertusa is one of the most widespread reef-building species in the deep sea. Its distribution in water depths between about 200 and 1,000 meters is controlled by various environmental factors, such as concentration of dissolved oxygen and temperature. During an expedition with the research vessel METEOR, however, the team on board discovered previously unknown cold-water coral reefs off the coast of Angola that they had not expected to find in this region. The South Atlantic is a very productive region, which is why a so-called oxygen minimum zone is formed there.

The study suggests that a predicted decrease in dissolved oxygen concentrations in the ocean due to global warming alone is unlikely to have the negative impact on cold-water corals that has been expected so far. However, a decrease in food supply to the deep sea is­also expected in the future, which could have an impact on the corals' capability to adapt.

Cold water coral reef with Lophelia pertusa in 350 meter water depth in the centre of the oxygen minimum zone off Angola in the south­east Atlantic. Photo: MARUM - Center for Marine Environmental Sciences, University of Bremen