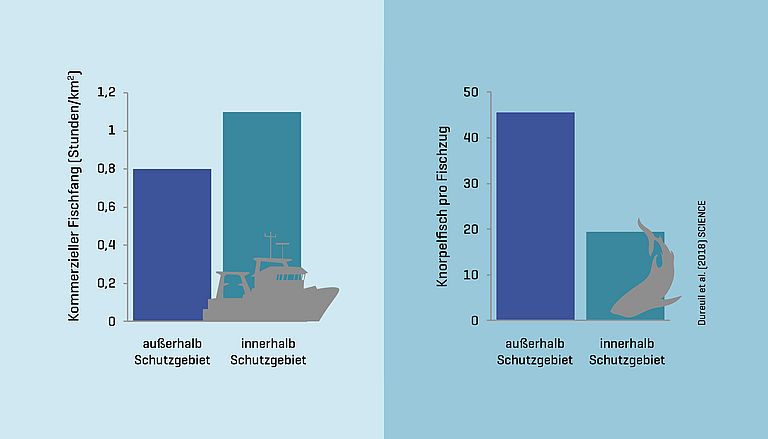 Commercial trawling (left) and catches of elasmobranch (right) outside and inside of protected areas. Graphics: M. Dureuil, Dalhousie Univ.

20 December 2018 / Kiel / Dalhousie. In Marine Protected Areas (MPAs), the marine environment should be under special protection. As a new study published today in the American journal Science shows, trawling is present in about 60% of EU MPAs, with sometimes significant negative impacts on the species living there. Researchers from Canada and GEOMAR Helmholtz Centre for Ocean Research Kiel have examined more than 700 MPAs in the Northeast Atlantic area.

About 45% of German and almost 30% of European territorial marine waters are designated as protected areas. This sounds reassuring, but does not mean that there is no use in these areas, such as fishing. For example, trawling fisheries are permitted in many of the so-called Marine Protected Areas (MPAs), with considerable negative effects, as a new study by German and Canadian scientists published today in the American journal Science.

Researchers studied more than 700 MPAs in European Union waters around the British Isles, the North Sea, France and Spain (excluding the Mediterranean). Analysis of satellite data revealed that the trawl intensity in MPAs was on average 40% higher than outside protected areas. "We show that the number of different shark and ray species in areas with high trawling is up to 69% lower," says Manuel Dureuil from Dalhousie University, lead author of the study. "Often this is caused by bottom trawling, which also can have negative effects on other organisms," Dureuil continued.

"Our study shows that due to bottom trawling Marine Protected Areas are not ‘safe havens’, but that endangered species are in some cases more threatened there than outside these areas," Dr. Rainer Froese, co-author of the study from GEOMAR Helmholtz Centre for Ocean Research Kiel. "From our perspective protected areas deserve their name only, if bottom trawling is stopped," continues Froese. In his view, there is no need to fish in MPAs. If fish stocks were managed sustainably, the stock sizes would grow and the permitted catches could easily be fished outside of MPAs, according to the fishery biologist from Kiel.

The scientists therefore demand that the minimum standards of MPAs be urgently improved. Politicians must agree on internationally comparable standards excluding bottom trawling and the management of MPAs needs to be strengthened and has to be made more transparent. Only in this way can MPAs be able to contribute in the long term to sustainable protection of the marine environment and endangered species.

Commercial trawling (left) and catches of elasmobranch (right) outside and inside of protected areas. Graphics: M. Dureuil, Dalhousie Univ.