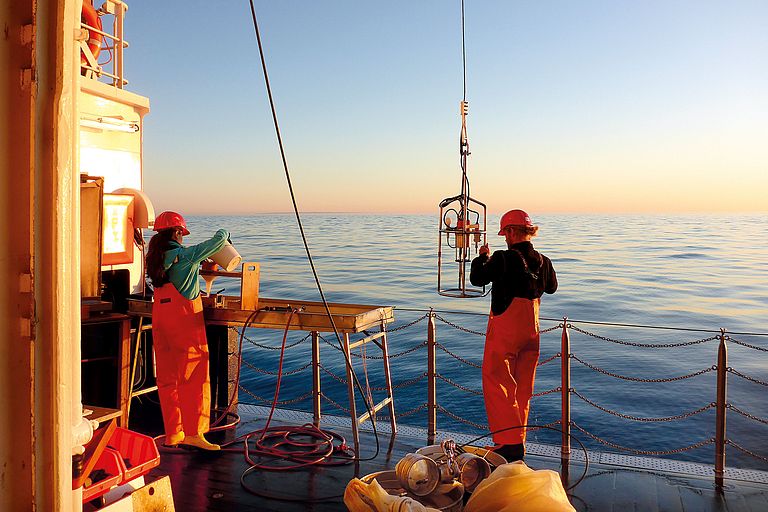 The Baltic Gender project has been supporting and guiding a change towards less gender inequality in the marine sciences since 2016. Photo: Jan Dierking/GEOMAR

Towards Gender Equality in Marine Sciences

18 June 2020 / Kiel. Marine Sciences—like other natural sciences—are still a male-dominated field with a significant lack of women in leadership and decision-making positions. The EU project Baltic Gender, coordinated by the GEOMAR Helmholtz Centre for Ocean Research Kiel, has supported and guided change in its eight partner institutions in the Baltic Sea region since 2016 with the aim of reducing gender inequalities. On its final conference this week, the project has presented new methods and approaches to reach this goal to an international audience.

In mid-May it was announced that meteorologist Prof. Dr. Katja Matthes will succeed Prof. Dr. Peter Herzig as the director of GEOMAR in October 2020. Then, for the first time in the history of German marine research, the two largest institutions in this field (GEOMAR and AWI, Alfred-Wegener-Institute) will be led by women. Despite this development, the proportion of women in leading positions in marine research remains low.

Since 2016, the EU project Baltic Gender, coordinated by the GEOMAR Helmholtz Centre for Ocean Research Kiel, has supported and guided change in its eight partner institutions in the Baltic Sea region with the aim of reducing gender inequalities. On the 18 June 2020, the project held its final conference —due to the COVID-19 pandemic as a webinar— and presented new methods and approaches to advance gender equality to more than 250 participants from all over Europe and the rest of the world.

“The foremost innovation of Baltic Gender is a new methodology, GenderWave, that examines how the gender perspective can be integrated into the content of marine research”, explains Prof. Matthes, who also coordinated this project during the past four years. “GenderWave includes a list of questions, elaborated with introductory texts and examples, that can be used by marine researchers while designing their projects. It will be transformed into a digital application to be published in August 2020 and fills a gap for a requirement increasingly prioritized by funding bodies,” explains Dr. Helena Valve who is a Senior Researcher at the Finnish Environment Institute and led the development of this new methodology.

Baltic Gender supported structural changes in the partner institutions towards more gender equality. “We have published a brochure on structural changes in marine sciences. This brochure includes 13 best practices of measures and activities, which support equal chances, transparent processes and fair cooperation”, says Dr. Iris Werner, the gender opportunity officer at the Kiel University whose team produced the brochure.

Baltic Gender also helped to implement one of the first Gender Equality Plans in higher education in Estonia and Lithuania. “Baltic Gender gave the impetus to initiate structural changes at the level of the marine research departments, which are now finding their way into the strategy of the entire university”, say Dr. Viktorija Vaitkevičienė, the chairwomen of the board of Marine Research Institute of the Klaipeda University. Besides, the project reinforced initiatives such as an international mentoring program, workshops and training sessions on topics such as leadership as well as data collection on gender-sensitive indicators.

“These outcomes from our project can be implemented in other marine institutions and even beyond. The presentations of the final conference as well as the links to the products are available from the project page”, concludes Prof. Matthes.

“The results of Baltic Gender come indeed timely in view of the UN Decade of Ocean Science for Sustainable Development 2021 to 2030”, says Professor Katja Matthes. “Baltic Gender will end in August 2020, but we believe that the momentum gained in the project will continue to make an impact”, she adds. “In the Baltic Gender consortium, we have several ideas of how to sustain this network and implement the results we achieved towards more gender equality in Marine Sciences.”

The members of the Baltic Gender consortium:

The Baltic Gender project has been supporting and guiding a change towards less gender inequality in the marine sciences since 2016. Photo: Jan Dierking/GEOMAR