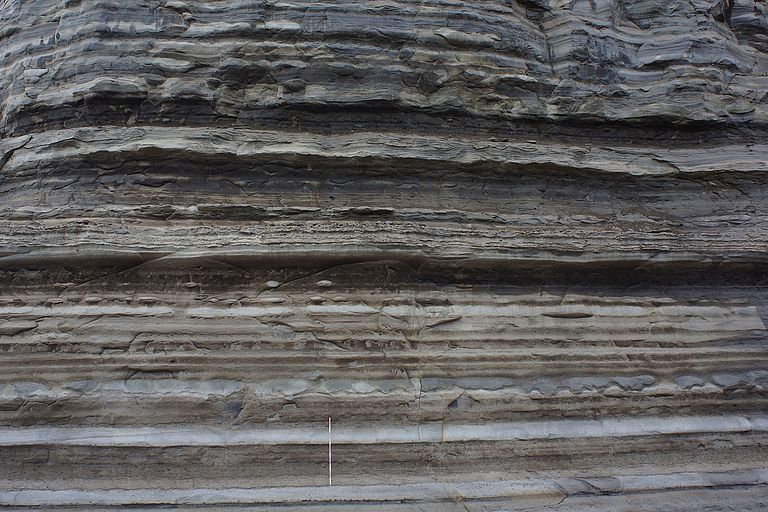 Cretaceous sediments in Tarfaya, Morocco. They document one of the two major anoxic events about 90 Mio. years ago. Photo: W. Kuhnt, CAU. 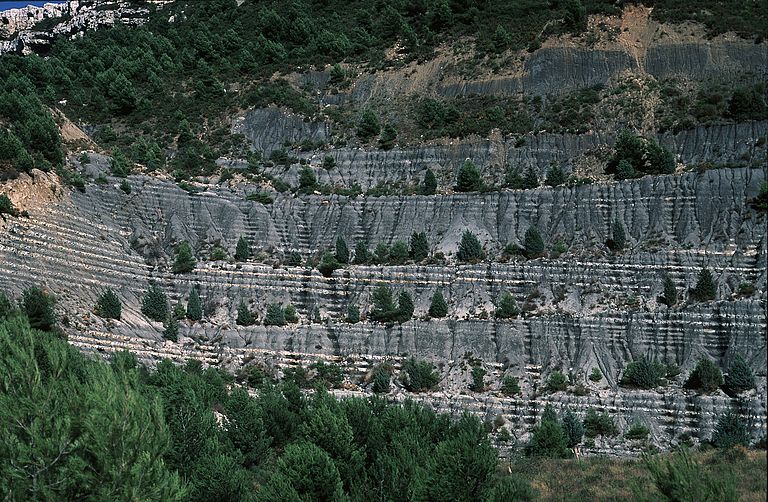 Cretaceous sediments in La Bedoule, France. They document one of the two major anoxic events about 100-120 Mio. years ago. Photo: W. Kuhnt, CAU.

Plankton as a climate driver instead of the sun?

A new view on past climate change

22 May 2019 / Kiel. Fluctuations in the orbital parameters of the Earth are considered to be the trigger for long-term climatic fluctuations such as ice ages. This includes the variation of the inclination angle of the Earth's axis with a cycle of about 40,000 years. Kiel-based marine scientists lead by GEOMAR Helmholtz Centre for Ocean Research Kiel have shown by using a new model that biogeochemical interactions between ocean and atmosphere could also be responsible for climate fluctuations on this time scale. The study was recently published in the renowned journal Nature Geoscience.

The climate history of the earth is marked by periodic changes that are usually ascribed to the solar radiation reaching the surface of the earth. This insolation is not constant over geological time but modulated by cyclic changes in the earth’s orbital parameters. One of the key parameters affecting insolation is the tilt of the earth’s rotation axis (obliquity) that changes periodically over time with a cycle length of about 40 000 years. Chemical and isotopic signatures of sediments that were deposited during the Cretaceous and other periods of earth’s history document regular changes in temperature and carbon cycling on this time scale. The 40 kyr cycles observed in the geological climate archives are believed to be the result of obliquity-triggered insolation changes affecting the surface temperature, the circulation of ocean and atmosphere, the hydrological cycle, the biosphere, and ultimately the carbon cycle. One of the problems with this standard theory is that changes in global insolation are very small and have to be amplified by poorly understood positive feedback mechanisms to affect global climate.

A group of scientists from Kiel, Germany propose a very different perspective that emerges from a new numerical model of the marine biosphere. It simulates the turnover of plankton biomass in the ocean and resolves the associated microbial oxidation and reduction reactions controlling the standing stocks of dissolved oxygen, sulfide, nutrients and plankton in the ocean. In their model experiments the scientists found surprisingly a self-sustained 40 kyr climate cycle using the biogeochemical model integrated in a circulation model of the Cretaceous Ocean without applying obliquity forcing.

“In our model, the carbon cycle is largely controlled by plankton living in the surface ocean”, explains Prof. Dr. Klaus Wallmann from GEOMAR, lead author of the study which was recently published in Nature Geoscience. Plankton consumes atmospheric CO2 via photosynthesis and by microorganisms that degraded plankton biomass and release CO2 back into the atmosphere. Since CO2 is a potent greenhouse gas, the biological CO2 turnover affects surface temperatures and global climate. The growth of plankton is controlled by nutrients that take part in a range of microbial oxidation and reduction reactions.

“We have integrated this new biogeochemical model in a circulation model of the Cretaceous Ocean, and it creates a self-sustained 40 kyr climate cycle without applying obliquity forcing”, says Dr. Sascha Flögel, co-author from GEOMAR. “From our perspective, the cycle is induced by a web of positive and negative feedbacks that are rooted in the oxygen-dependent turnover of nitrogen, phosphorus, iron and sulfur in the ocean. Chemical and isotopic data recorded in sediments deposited in the Cretaceous Ocean show periodic changes that are consistent with the model results”, Flögel continues

In this new view on climate change, the relationship between causes and effects is radically different from the standard orbital theory. The marine biosphere rather than insolation is setting the pace and amplitude by controlling the partial pressure of CO2 in the atmosphere. “Our new theory is supported by observations and consistent with our understanding of biogeochemical cycles in the ocean”, according to Prof. Wallmann.

“However obliquity and other orbital parameters may also affect global climate change when their delicate effects on insolation are amplified by positive feedback mechanisms. Therefore, the periodic climate change documented in the geological record may reflect both the breath of the biosphere and the response of the earth system to external orbital and insolation forcing”, summarizes Prof. Dr. Wolfgang Kuhnt from Kiel University who participated in this study.

This study was supported by the German Research Foundation via Collaborative Research Center 754 (Climate–Biogeochemistry Interactions in the Tropical Ocean) and the Emmy Noether Program group ICONOX.

Further support was provided by the Helmholtz Association via the ESM project.

Cretaceous sediments in Tarfaya, Morocco. They document one of the two major anoxic events about 90 Mio. years ago. Photo: W. Kuhnt, CAU.

Cretaceous sediments in La Bedoule, France. They document one of the two major anoxic events about 100-120 Mio. years ago. Photo: W. Kuhnt, CAU.