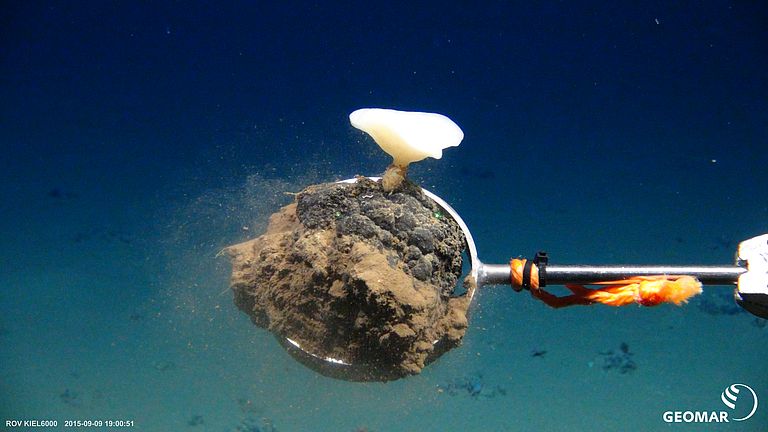 The habitat formed by manganese nodules is home to specific sessile and mobile fauna. Photo: ROV-Team, GEOMAR (CC BY 4.0)

Scientists call for measures to protect the marine environment

5 January 2018 / Kiel / Bremen. Due to the increasing globalization and the extensive use of high-tec materials, the demand for rare metals has increased substantially. Thus, for many countries the search for ore deposits from the deep sea is becoming increasingly important. For example, the number of exploration licenses submitted to the International Seabed Authority (ISA) has tripled in the last five years. But what environmental risks would the mining of raw materials from the deep sea pose and how can mining be made as environmentally friendly as possible? These questions were investigated by researchers from eleven European countries within the framework of the EU-funded project MiningImpact. Their findings and assessments were published today in a paper in the international journal Science.

The deep sea is still widely unexplored and holds many surprises, not only for scientists. Thus, a common opinion is that the large deep-sea plains in the central Pacific are very uniform and sparsely populated. Reality is different, state the scientist of the European project "MiningImpact": The ecological diversity in the deep sea is enormous, especially in areas with a high density of manganese nodules.

The nodules do not only consist of the name-giving manganese, but in addition to iron coveted metals, such as copper, cobalt or nickel. Around the manganese nodules, a very special and fragile ecosystem exists, which would be destroyed on a large scale if the nodules are mined. It consists of very different organisms living on the nodules but also in the water column. The recovery of the ecosystem would take many decades to hundreds of years. Thus, in the opinion of the authors of the study, precautionary regulations are indispensable in order to protect marine ecosystems and their biodiversity.

The researchers therefore recommend the establishment of protected areas that are comparable to the environmental conditions and species communities of potential mining areas. Furthermore, additional protected areas within the license areas are required. According to the authors, technologies for monitoring of deep-sea mining activities are already in place, but transfer of knowledge between industry and science as well as a standardization of the investigation procedures is necessary.

The recommendations have to be made available in particular to the International Seabed Authority (ISA), which manages the seafloor resources in international waters outside the Exclusive Economic Zones (200 nautical miles) of individual countries. International legislation also obliges the ISA to ensure effective protection of the marine environment from the harmful impacts from marine mining. Concrete environmental regulations for the protection and the conservation of the deep-sea environment, including their biodiversity and their ecological integrity, have not yet been agreed by the ISA. However, the authors of the study are optimistic that their findings will be included in the current work of the ISA.

So far, deep-sea mining is not lucrative, even from an economic point of view. In order to achieve profits, mining would have to take place on areas of several hundred square kilometers of seafloor per year. The costs for environmental management, including monitoring, compensation and restoration techniques, would add to this on top.

The "MiningImpact" project, which involves 11 European countries, was funded with a total of 9.5 million euros under the Joint Programming Initiative Healthy and Productive Seas and Oceans (JPI Oceans).

High-res images:
Manganes nodules are home for many life forms in the deep sea. Photo: ROV-Team, GEOMAR (CC BY 4.0)

The habitat formed by manganese nodules is home to specific sessile and mobile fauna. Photo: ROV-Team, GEOMAR (CC BY 4.0)