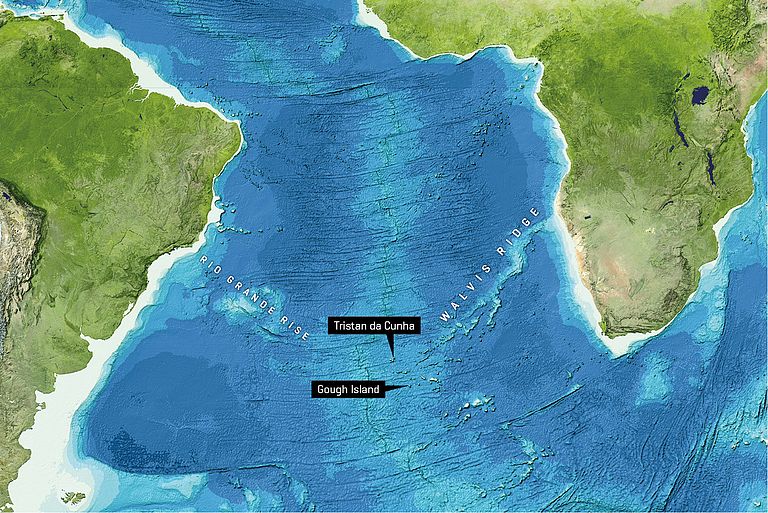 The location of the volcanic islands Tristan da Cunha and Gough in the South Atlantic. Image Reproduced from the GEBCO world map 2014 www.gebco.net, 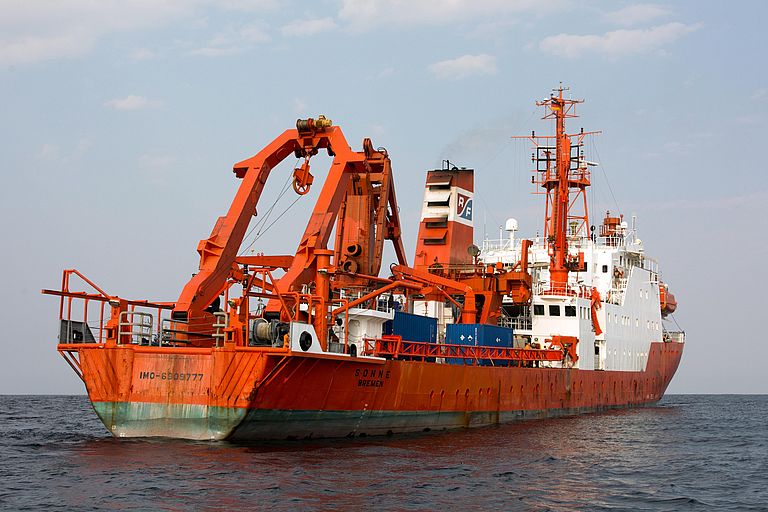 RV SONNE (I) in June 2014 during one of her last expeditions as a German research vessel. Photo: Roland Knauer 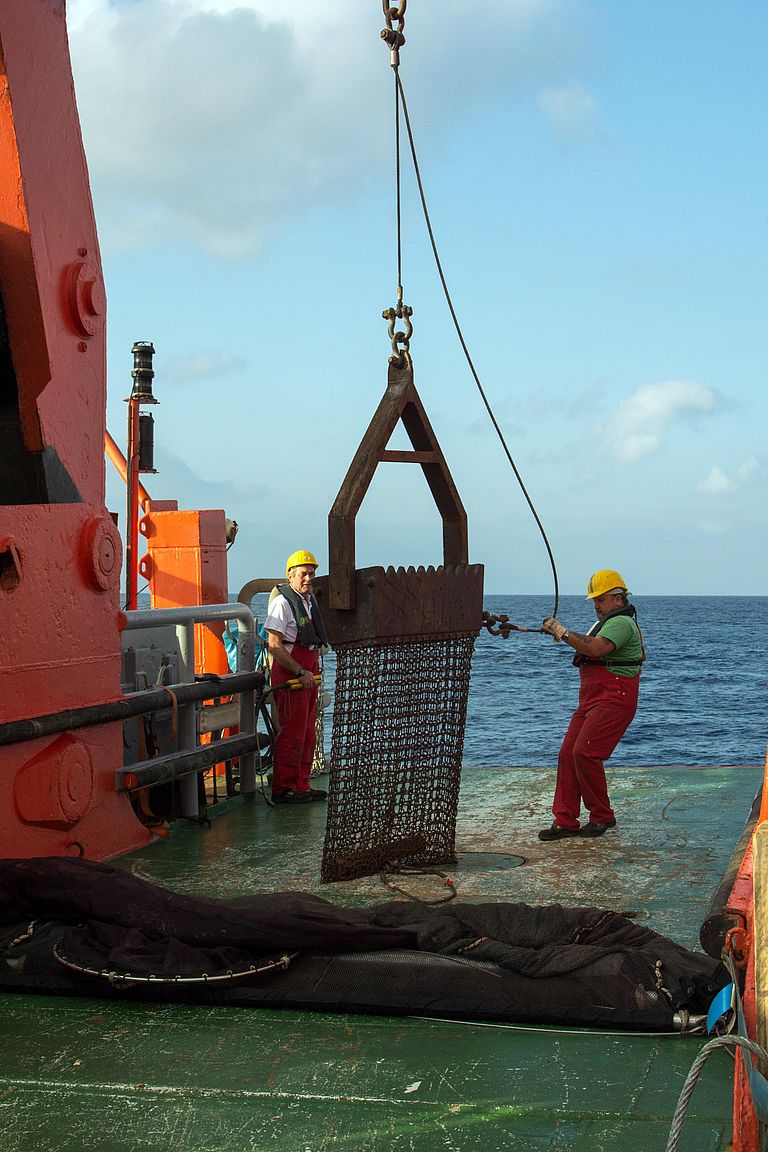 With a dredge rock samples are taken from the Walvis Ridge aboard the SONNE (I). Photo: Roland Knauer. 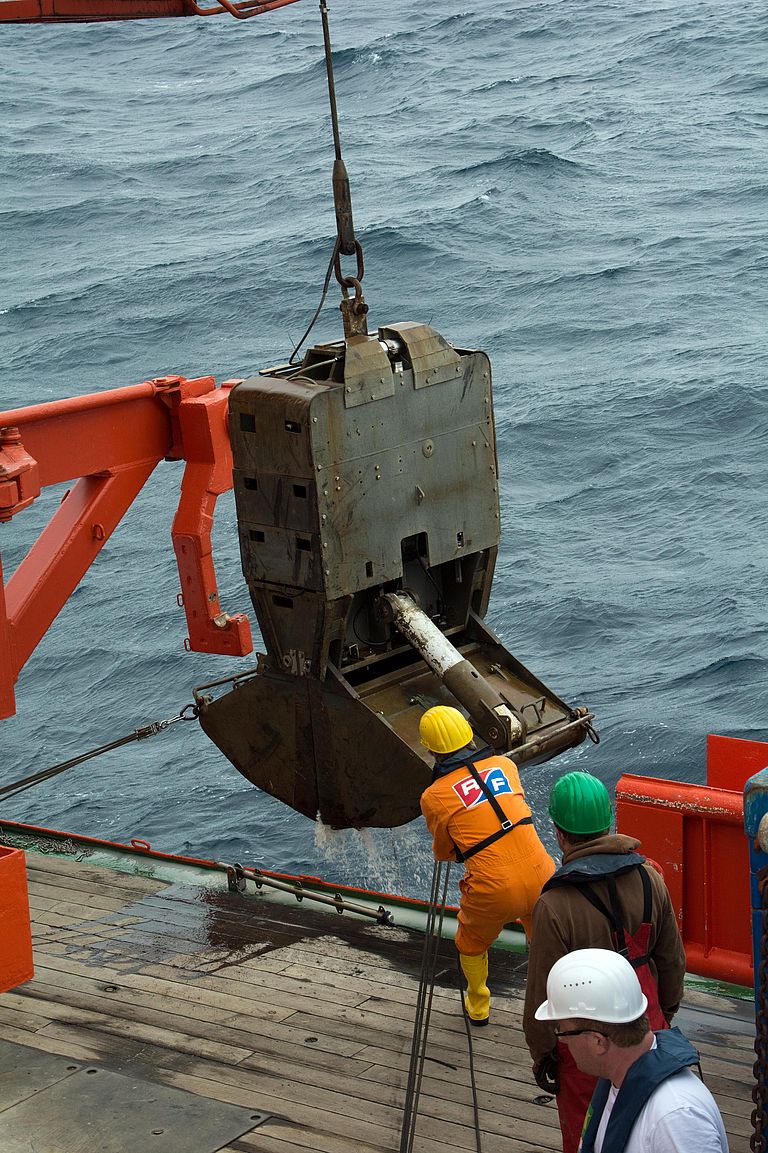 The TV-grab allows an even more accurate sampling at the Walvis Ridge. Photo: Roland Knauer

Twin volcanic chains above a single hotspot with distinct roots

27 July 2015/Kiel. Many processes inside the earth are still enigmatic. One of the open questions is how neighboring chains of volcanoes, supplied by the same volcanic hotspot, can emit material of distinct geochemical composition over tens of millions of years? Researchers of the GEOMAR Helmholtz Centre for Ocean Research Kiel have now found a possible explanation in the South Atlantic. The study is published today in the international journal Nature Communications.

Located in the South Atlantic, thousands of kilometers away from the nearest populated country, Tristan da Cunha is one of the remotest inhabited islands on earth. Together with the uninhabited neighboring island of Gough about 400 kilometers away, it is part of the British Overseas Territories. Both islands are active volcanoes, derived from the same volcanic hotspot. A team of marine scientists and volcanologists from the GEOMAR Helmholtz Centre for Ocean Research Kiel, from the University of Kiel and the University of London discovered that about 70 million years ago, the composition of the material from the Tristan-Gough hotspot deposited on the seafloor changed. In the international scientific journal Nature Communications, the team provides an explanation for this compositional change that could help explain similar findings in other hotspots worldwide.

Volcanic hotspots can be found in all oceans. “Pipe-like structures, so-called ‘Mantle Plumes’, transport hot material from the earth's interior to the base of the earth's lithospheric plates. As the mantle material rises beneath the plate, pressure release melting takes places and these melts rise to the surface forming volcanoes on the seafloor,” explains Professor Kaj Hoernle from GEOMAR, lead author of the current study. As the earth's plates move over the hotspots, the volcanoes are moved away from their sources but new volcanoes form above the hotspots. “As a result long chains of extinct volcanoes extend from the active volcano located above the hotspot for over thousands of kilometers in the direction of plate motion", adds the volcanologist.

Unlike most other hotspots, scientists can trace the history of the Tristan-Gough hotspot back to its initiation. Huge outpourings of flood basalts in Etendeka and Brazil at the initiation of the hotspot 132 million years ago most likely contributed to the breaking apart of the Gondwana supercontinent into new continents including Africa and South America. The rifting apart of Africa and South America has led to the formation of the South Atlantic Ocean basin. As the Atlantic widened, two underwater mountain ranges (the Walvis Ridge and Guyot Province on the African Plate and the Rio Grande Rise on the South American Plate) formed above the hotspot. The active volcanic islands of Tristan da Cuhna and Gough lie at the end of the track on the African Plate.

Several expeditions, including two with the German research vessel SONNE (I) led by Kiel researchers, recovered samples from these submarine mountains. Geochemical analyzes show that the oldest parts of the Walvis Ridge, as well as the intial volcanic outpourings on the continents, have compositions similar to the presently active Gough volcano. The northwestern part of the Walvis Ridge and Guyot Province younger than 70 million years, however, is divided into two geographically distinct geochemical domains: “The southern part also shows the geochemically enriched Gough signature, while the northern part is geochemically less enriched, similar to the present Tristan da Cunha Volcano”, says co-author Joana Rohde.

A very likely explanation is hidden more than 2,500 kilometers deep in the Earth's lower mantle. At the base of the lower mantle beneath southern Africa, seismic surveys have shown a huge lens of material, which has different physical properties than the surrounding mantle material. This lens is called a “Large Low Shear Velocity Province” (LLSVP). The Tristan-Gough hotspot is located above the margin of this LLSVP. “In its early stages, the plume only appears to have sucked in material from the LLSVP," explains Professor Hoernle, "but over the course of time the LLSVP material at the NW side of the margin was exhausted and material from outside the LLSVP was drawn into the base of the plume.” Since then, the plume has contained two types of compositionally distinct mantle, leading to the formation of parallel but compositionally distinct plume subtracks. “At some point in the future, the plume might be completely cut off from the LLSVP lens, again erupting only one type of composition, but now Tristan rather than Gough type of material.” says the volcanologist.

This model is also applicable to other hotspot tracks such as Hawaii. There, too, is evidence that parallel chains of volcanoes emit geochemically distinct material with one or the other composition dominating at different times in the history of the hotspot. A second LLSVP exists beneath the Pacific. “Thanks to the investigations at the Tristan-Gough-Hotspot, we now understand better the mysterious processes taking place in the interior of our planet," says Professor Hoernle.

The location of the volcanic islands Tristan da Cunha and Gough in the South Atlantic. Image Reproduced from the GEBCO world map 2014 www.gebco.net,

RV SONNE (I) in June 2014 during one of her last expeditions as a German research vessel. Photo: Roland Knauer

With a dredge rock samples are taken from the Walvis Ridge aboard the SONNE (I). Photo: Roland Knauer.

The TV-grab allows an even more accurate sampling at the Walvis Ridge. Photo: Roland Knauer