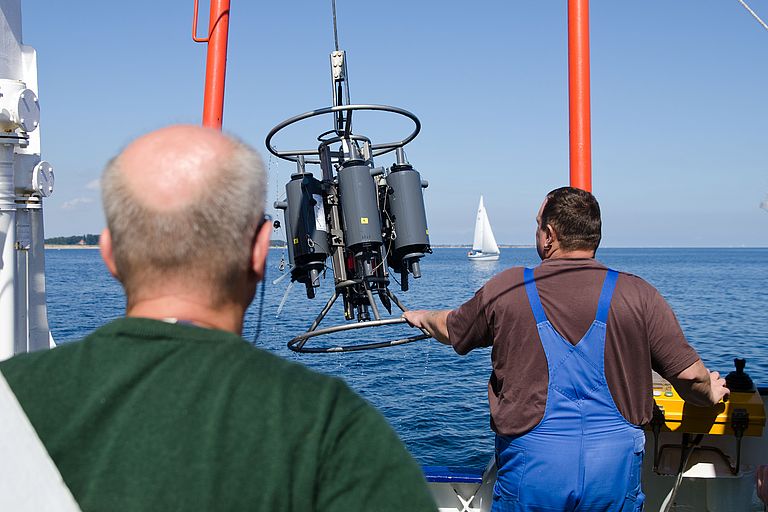 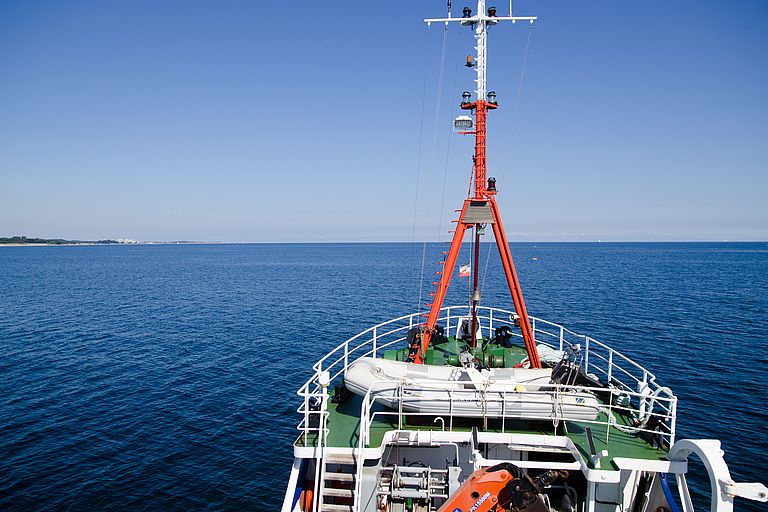 View from the research cutter LITTORINA on the waters at the outlet of Eckernförde bay. This is where the time series station Boknis Eck is located. Photo: J. Steffen, GEOMAR 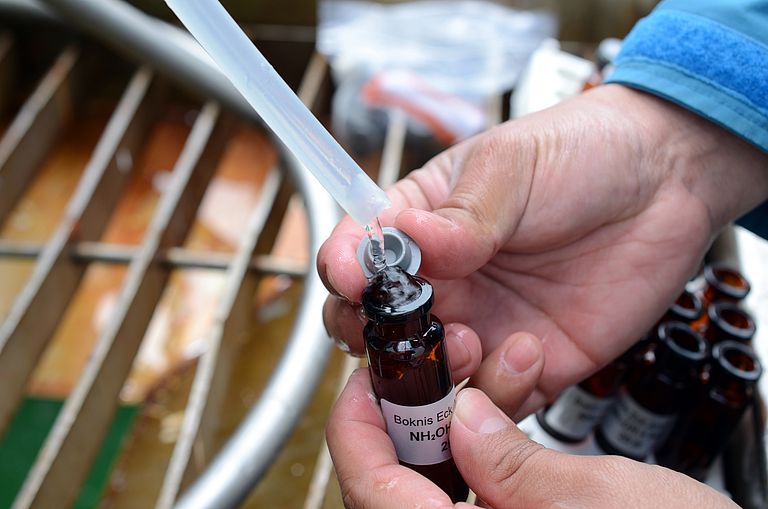 01 December 2014/Kiel. Despite extensive measures to protect the Baltic Sea from anthropogenic activities since the late 1980s, oxygen concentrations continue to decrease. Rising temperatures in the bottom water layers could be the reason for the oxygen decline. This paper reports on the first comprehensive analysis of measurement data from the Boknis Eck time series station, and it was recently published in the international journal Biogeosciences.

Off the coast of Schleswig-Holstein at the exit of Eckernförde Bay is a hidden treasure, but it is not one of chests full of silver and gold. It is a unique scientific record. Since 1957, environmental parameters such as oxygen concentrations, temperature, salinity and nutrients have been measured monthly at the Boknis Eck time series station. "It is one of the oldest active time series stations for this kind of data worldwide," explains the scientific coordinator Prof. Dr. Hermann Bange from GEOMAR Helmholtz Centre for Ocean Research Kiel. To date, however, the long time-series has only been partially evaluated. Bange and his team have now, for the first time, analyzed chemical, biological and physical data for the entire period since 1957. Their results have shown that measures to protect the Baltic Sea have been somewhat effective, however, general climate change has, to some degree, buffered against these measures. The study has now been published in the international journal Biogeosciences.

A natural phenomenon of the Baltic Sea is the lack of oxygen in the deeper water layers. The stratification of the Baltic Sea water is quite stable, with fresh saline and oxygen-rich water only reaching its inner regions from the North Sea through the Danish islands. "We see this also in Boknis Eck, from about 20 meters depth," explains Sinikka Lennartz, M.Sc., from GEOMAR and lead author of the new study. In the second half of the 20th century this natural phenomenon was augmented because countries bordering the Baltic Sea dumped large amounts of agricultural fertilizers and sewage into the sea. "That meant an oversupply of nutrients. Algae were then able to proliferate, and as soon as they die and sink to the bottom, microorganisms decompose the biomass and consume a lot of oxygen; this resulted in large oxygen-free zones at the bottom of the Baltic Sea to be formed " explains Lennartz.

In the mid-1980s, the Baltic countries agreed to improve the protection of the sea. An increasing number of sewage treatment plants were built and the use of fertilizers in agriculture declined. "This trend we can clearly demonstrate in Boknis Eck. Since the late 80s, the concentration of nutrients has decreased," says Professor Bange. The hope that this would restore more oxygen in the lower layers of water, however, has not been realized. "The oxygen trend is still down significantly," explains Lennartz, "we see more and more events at Boknis Eck when no oxygen is measured below 20 meters depth."

One possible explanation the researchers found for the continued decline of oxygen concentrations is related to changes in water temperature. "In late summers the temperature on the seafloor has risen by an average of 0.4 degrees per decade. Higher temperatures also mean a more efficient degradation of biomass and therefore more consumption of oxygen," says Professor Bange. Thus, the data suggests that rising seawater temperature caused by climate change has buffered against  measures for the protection of the Baltic Sea. "Nevertheless, the bordering countries should not subside in their efforts to protect the environment. With increasing temperatures, the Baltic Sea would become eutrophic a lot faster if we reintroduced more waste," says marine chemist Bange.

At the same time, the study demonstrates the high value of long time-series measurements such as those at Boknis Eck. "In order to identify long-term trends in the environment and distinguish anthropogenic changes of natural fluctuations, short-term measurement campaigns are not sufficient. Therefore, we really have a treasure with the Boknis Eck data that is also irreplaceable for global comparisons," says Bange.

View from the research cutter LITTORINA on the waters at the outlet of Eckernförde bay. This is where the time series station Boknis Eck is located. Photo: J. Steffen, GEOMAR