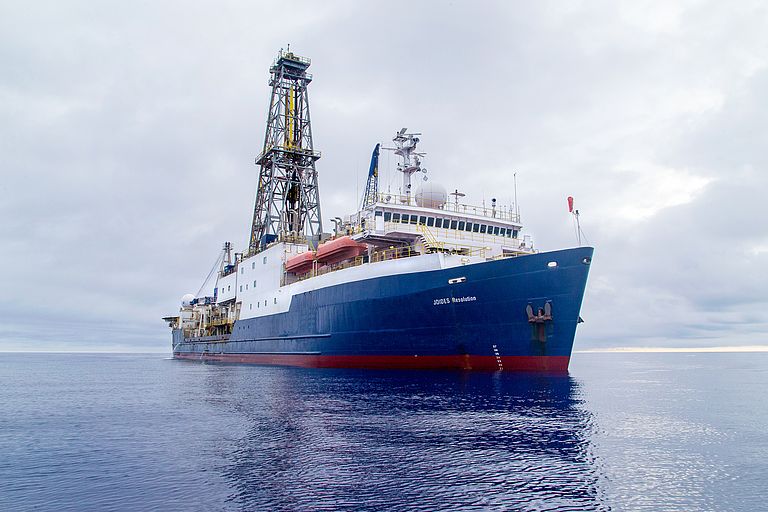 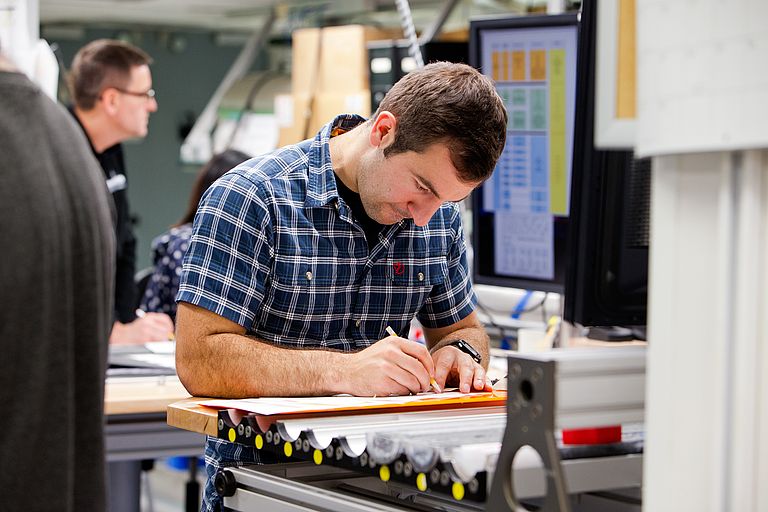 Dr. Philipp Brandl in a laboratory of the JOIDES RESOLUTION. Photo: Bill Crawford/IODP 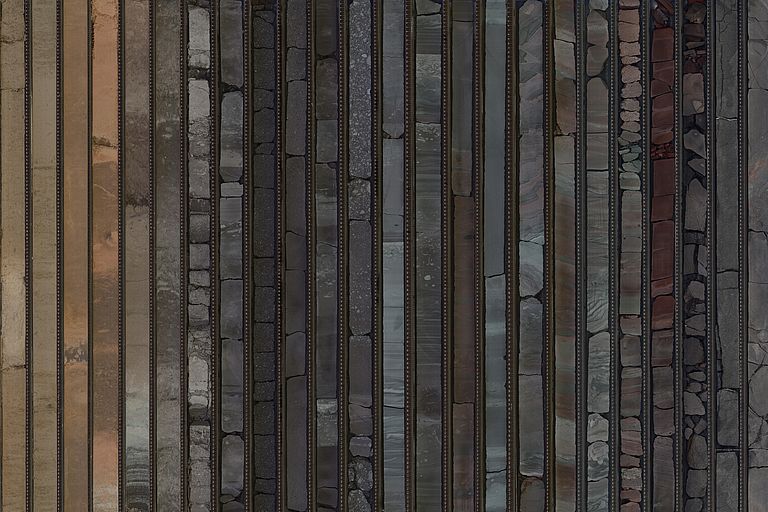 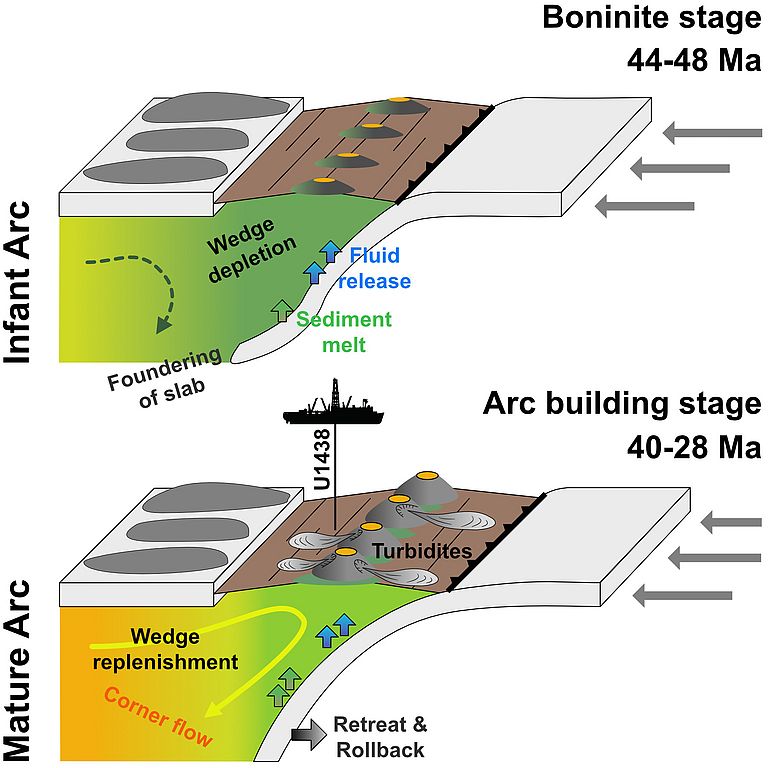 The graphic shows the early stages of the Izu-Bonin subduction zone. The active subduction zone has been moving eastwards throughout its history. The drilling took place where the process has begun. Graphic: Philipp Brandl, GEOMAR

10 February 2017/Kiel. The movements of Earth’s tectonic plates shape the face of our planet. The sinking of one plate beneath another, known as subduction, causes volcanism and earthquakes. Subduction zones lie, for example, off the coast of Indonesia, Chile and Japan. But how exactly did this process begin? As part of the International Ocean Discovery Program, an international science team was able to drill and investigate the origin of a subduction zone for the first time in 2014. The team is now publishing its data in the international scientific journal Earth and Planetary Science Letters.

About 2000 kilometers east of the Philippine Islands lies one of the most famous topographical peculiarities of the oceans: the Mariana trench. Reaching depths of up to 11,000 meters below sea level, it holds the record as the deepest point of the world's ocean. This 4000-kilometer-long trench extends from the Mariana Islands in the south through the Izu-Bonin Islands to Japan in the north. Here, the Pacific Plate is subducted beneath the Philippine Sea Plate, resulting in intense volcanic activity and a high number of earthquakes. The entire area is part of the “Pacific Ring of Fire.”

But when and how exactly did the subduction of the Pacific Plate begin? This is a controversial topic among scientists. An international team led by the GEOMAR Helmholtz Center for Ocean Research Kiel, the Japan Agency for Marine Earth Science and Technology (JAMSTEC) and the Australian National University investigated this early phase of subduction along the Izu-Bonin-Mariana trench, with findings published in the March edition of the scientific journal Earth and Planetary Science Letters.

The study is based on a drill core that was obtained by the International Ocean Discovery Program (IODP) in 2014 with the US research drilling vessel JOIDES RESOLUTION some 600 kilometers west of the current Izu-Bonin Trench. “For the first time, we were able to obtain samples of rocks that originate from the first stages of subduction,” says Dr. Philipp Brandl from GEOMAR, first author of the study. “It is known that the active subduction zone has been moving eastwards throughout its history and has left important geological traces on the seabed during its migration. We have now drilled where the process has begun.”

The team of the JOIDES RESOLUTION was able to drill more than 1600 meters deep on the seabed, starting at a water depth of around 4700 meters below sea level. “This is already at the limit of the technically feasible”, emphasizes Dr. Brandl. Based on analysis of this drill core, the researchers were able to trace the history of the subduction zone layer by layer up to the approximately 50 million year-old rocks at the bottom of the core, which are typical for the birth of a subduction zone. “There has not been such a complete overview yet,” says Dr. Brandl.

Brandl and his colleagues were now able to acquire and analyze microscopic inclusions of cooled magma from the rocks. The data obtained provide the scientists with insights into the history of volcanic activity at the Pacific Ring of Fire 30-40 million years ago. The researchers found evidence that volcanism was only beginning to gain momentum. The volcanic activity intensified with the rollback of the subduction zone towards the east and the huge explosive stratovolcanoes formed, similar to those present nowadays, for example along the western rim of the Pacific Ring of Fire.

However, further drilling is necessary to test the validity of these observations. “The more drill cores we can gain from such old strata, the better we learn to understand our own planet,” Dr. Brandl says. The question of how subduction zones develop is not only interesting to understand the history of the earth. Subduction zones are the drivers for the chemical exchange between the earth's surface and the earth's interior. “The dynamics of a subduction zone can thus also influence the speed of global elemental cycles”, summarizes Dr. Brandl.

Note:
The drill core on which the study is based was obtained during Expedition 351 of the International Ocean Discovery Program (IODP). The study included scientists from the GEOMAR, the Australian National University, Japan Agency for Marine Earth Science and Technology (JAMSTEC), California State University Northridge (USA), University of Leeds (UK), Geological Survey of Japan and the Chinese Academy of Science.

The research drilling vessel JOIDES RESOLUTION. Photo: Bill Crawford/IODP
Dr. Philipp Brandl in a laboratory of the JOIDES RESOLUTION. Photo: Bill Crawford/IODP
Segments of the drill core obtained on IODP expedition 351. Photo: Philipp Brandl, GEOMAR
The graphic shows the early stages of the Izu-Bonin subduction zone. The active subduction zone has been moving eastwards throughout its history. The drilling took place where the process has begun. Graphic: Philipp Brandl, GEOMAR

Dr. Philipp Brandl in a laboratory of the JOIDES RESOLUTION. Photo: Bill Crawford/IODP

The graphic shows the early stages of the Izu-Bonin subduction zone. The active subduction zone has been moving eastwards throughout its history. The drilling took place where the process has begun. Graphic: Philipp Brandl, GEOMAR