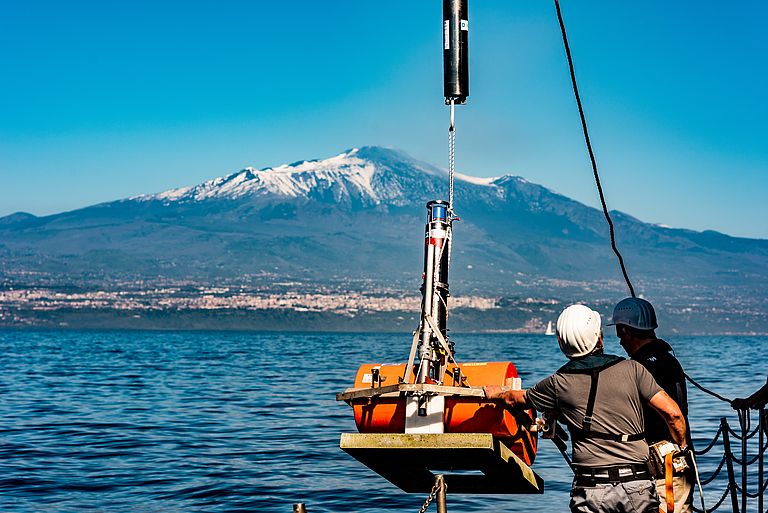 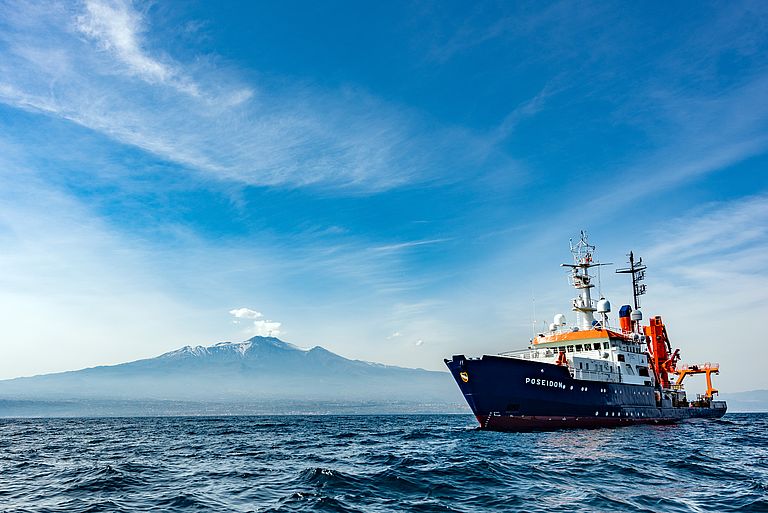 Volcano flank moves under water – Tsunami is a possible consequence

10 October 2018 / Kiel. The southeast flank of Mount Etna slowly slides towards the sea. A team of scientists from GEOMAR Helmholtz Centre for Ocean Research Kiel and the Kiel cluster of excellence “The Future Ocean” showed for the first time movement of Etna’s underwater flank using a new, sound-based geodetic monitoring network. Within eight days, the flank slipped about four centimeters. A sudden and rapid descent of the entire slope could lead to a tsunami with disastrous effects for the entire region. The results have been published today in the international journal Science Advances.

As Europe’s most active volcano, Mount Etna is intensively monitored by scientists and Italian authorities. Satellite-based measurements have shown that the southeastern flank of the volcano is slowly sliding towards the sea, while the other slopes are largely stable. To date, it has been entirely unknown if and how movement continues under water, as satellite-based measurements are impossible below the ocean surface. With the new GeoSEA seafloor geodetic monitoring network, scientists from the GEOMAR Helmholtz Centre for Ocean Research Kiel, the Kiel University, priority research area Kiel Marine Science, and the Istituto Nazionale di Geofisica e Vulcanologia (INGV) have now been able to detect for the first time the horizontal and vertical movement of a submerged volcanic flank.

The results confirm that the entire southeastern flank is in motion. The driving force of flank movement is most likely gravity, and not the ascent of magma, as previously assumed. Catastrophic collapse involving the entire flank or large parts of it cannot be excluded and would trigger a major tsunami with extreme effects in the region. The results of the study have been published today in the international journal Science Advances.

"At Mount Etna we used a sound based underwater geodetic monitoring network, the so-called marine geodesy, on a volcano for the first time ", says Dr. Morelia Urlaub, lead author of the study. She led the investigations as part of the "MAGOMET - Marine geodesy for offshore monitoring of Mount Etna" project. In April 2016, the GEOMAR team placed a total of five acoustic monitoring transponder stations across the fault line that represents the boundary between the sliding flank and the stable slope. "We placed three on the sliding sector and two on the presumably stable side of the fault line," says Dr. Urlaub.

During their mission each transponder was sending an acoustic signal every 90 minutes. Since the speed of sound in water is known, the travel time of the signals between transponders gave information on the distances between transponders on the seafloor with a precision of less than one centimeter. "We noticed that in May 2017 the distances between transponders on different sides of the fault clearly changed. The flank slipped by four centimeters seawards and subsided by one centimeter within a period of eight days," explains Dr. Urlaub. This movement can be compared to a very slow earthquake, a so-called "slow slip event". It was the first time that the horizontal movement of such a slow slip event was recorded under water. In total, the system delivered data for about 15 months.

A comparison with ground deformation data obtained by satellite showed that the southeastern flank above sea level moved by a similar distance during the same observation period. "So the entire southeast flank changed its position," says Dr. Urlaub.

"Overall, our results indicate that the slope is sliding due to gravity and not due to the rise of magma," she continues. If magma dynamics in the centre of the volcano triggered flank deformation, displacement of the flank would be expected to be larger onshore than below water. This is crucial for hazard assessments. "The entire slope is in motion due to gravity. It is therefore quite possible that it could collapse catastrophically, which could trigger a tsunami in the entire Mediterranean," explains Professor Heidrun Kopp, coordinator of the GeoSEA array and co-author of the study. However, the results of the study do not allow a prediction whether and when such an event might occur.

"Further basic research is needed to understand the geological processes at and around Etna and other coastal volcanoes. Our investigation shows that the sound-based geodetic monitoring network can be a tremendous help in this respect," summarises Dr. Urlaub.

The research vessel POSEIDON off Mount Etna. It is the most active volcano in Europe. Photo: Felix Gross (CC BY 4.0)

The usage of the image material provided with this press release is free for editorial purposes in conjunction with the content of this press release.  For images marked "CC BY 4.0", the Creative Commons Attribution 4.0 International license applies: https://creativecommons.org/licenses/by/4.0/deed.de