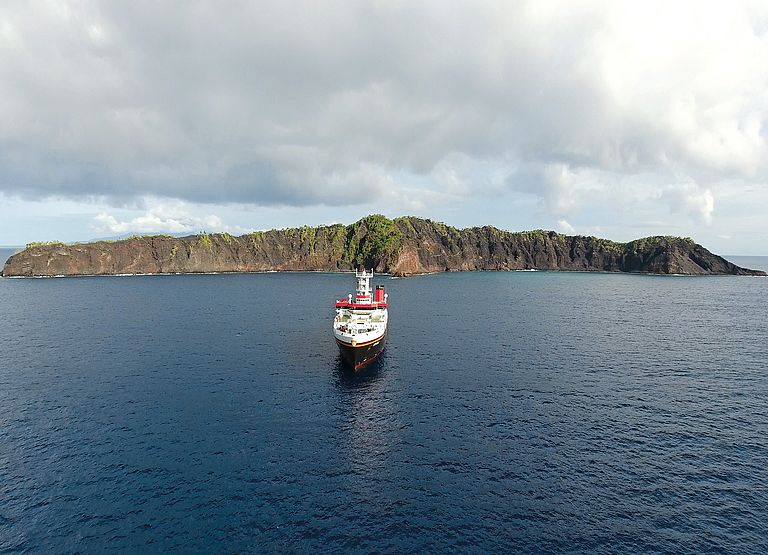 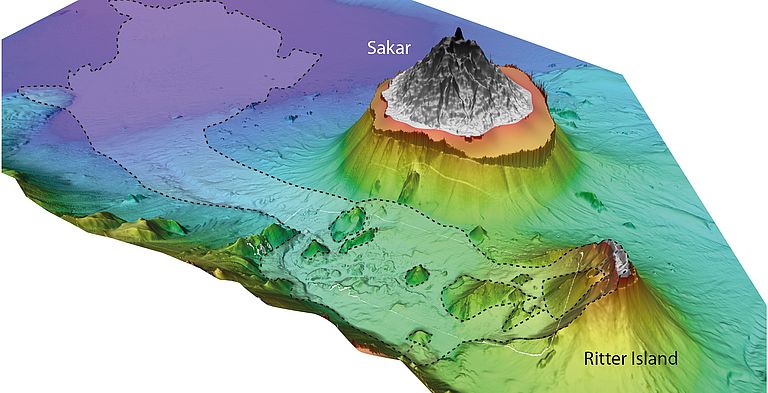 Precursors of a Catastrophic Collapse

16 May 2019 / Kiel. The flanks of many island volcanoes such as Mount Etna or Mount Kilauea slide very slowly towards the sea. Whether these landslides are forewarnings of a catastrophic collapse or, on the contrary, even reduce its risk, is not yet understood. Geophysicists from the GEOMAR Helmholtz Centre for Ocean Research in Kiel have now published a study in the international journal Earth and Planetary Science Letters, which shows that sporadic, slow landslides on the small volcanic island of Ritter Island in New Guinea preceded a catastrophic collapse.

On the morning of the 13th of March 1888, the inhabitants of the Finschhafen trading post on the east coast of New Guinea were awakened by a dull rumbling sound. An eyewitness later reported that the water in the port had receded at the same time. A short time later, several two- to three-metre high waves hit the coast. It was a tsunami on that fateful morning that devastated the surrounding coasts. Several thousand people probably died in New Guinea and the Bismarck Archipelago.

The cause of the tsunami was quickly discovered: the largest part of the volcanic island of Ritter Island, 150 kilometres from Finschhafen, had slipped into the sea in a single catastrophic collapse. However, some questions about the exact course of the landslide remained unanswered.

In the international journal Earth and Planetary Science Letters, researchers from the GEOMAR Helmholtz Centre for Ocean Research Kiel together with colleagues from the University of Birmingham, the University of Malta, the University of London and the German Research Centre for Geosciences, have now published a study showing that the volcanic slope of Ritter Island had already slipped before the catastrophe of 13 March 1888 - but much more slowly. "These new findings help us to better assess the hazard potential of other volcanic islands," says Dr Jens Karstens of GEOMAR, first author of the study.

The study is based on the expedition SO252 of the German research vessel SONNE to Ritter Island in Autumn 2016. With seismic methods, the international team led by Prof. Dr. Christian Berndt (GEOMAR) precisely measured the traces of the disaster of 1888. They found evidence that the flank of the island had moved sporadically over a long period of time before 1888. This is indicated by corresponding deformation of the subsurface at a smaller volcanic cone off the coast of Ritter Island.

It is unknown whether slow landslides at volcanic flanks are precursors of a catastrophic collapse, or even whether they might reduce the risk of such a collapse because they relieve tension from the volcanic system. "At Ritter Island, we now have evidence that sporadic, small landslides have preceded a much larger one," explains Dr Karstens.

Both types of landslides were observed last year on active volcanoes. Last year's eruption of Kilauea on Hawaii was accompanied by a landslide of the volcano flank, which caused a moderate earthquake. The eastern flank of Mount Etna in Sicily is also moving slowly towards the sea, as showed in a study published in Autumn 2018. In December 2018, an eruption of the volcano Anak Krakatau caused a landslide that triggered a tsunami in the Sunda Strait (Indonesia) and killed more than 400 people. The events at Anak Krakatau are comparable to those that took place on the 13th of March 1888 at the Ritter Island Volcano. This demonstrates the relevance of the findings at Ritter Island for hazard assessments on volcanic islands all over the world.

"The better we know the dynamics of such events, the better we can asses the hazard for a given region. Ritter Island is a very good case study because the volcano resembles many other volcanic islands and because the eruption and the tsunami are well documented thanks to eyewitness accounts. Together with our modern research methods, we can get a more complete picture of the processes of 1888," summarizes Dr. Karstens.

The research vessel SONNE in front of Ritter Island during the expedition SO252 in Autumn 2016. Photo: Christian Berndt/GEOMAR

3D visualization of Ritter Island and the surrounding seafloor with traces of the landslide of 1888. Graphic: Jens Karstens/GEOMAR

Video footage can be provided on request.