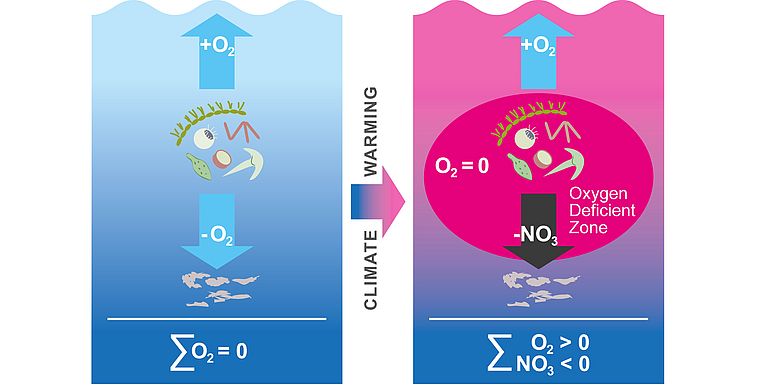 The far–future ocean: warm yet oxygen-rich

27 June 2019 / Kiel. The higher the temperature, the less gases are dissolved in the water— this simple physical relationship explains, among other things, the measurable loss of oxygen in the warming ocean. In the international journal Nature Communications, however, scientists from the GEOMAR Helmholtz Centre for Ocean Research Kiel have published a model study suggesting that despite warming and centuries of deoxygenation the ocean will contain more oxygen in 4000 years than today. The study explains inconsistencies in the oxygen budget of previous simulations, but also raises new questions.

The oceans are losing oxygen. Numerous studies based on direct measurements in recent years have shown this. Since water can dissolve less gas as temperatures rise, these results were not surprising. In addition to global warming, factors such as eutrophication of the coastal seas also contribute to the ongoing deoxygenation. Will the oceans become completely oxygen-depleted at some point in the future if global warming continues? Such anoxic phases have actually occurred several times in the Earth's history, combined with major mass extinction events. They were also accompanied by high carbon dioxide concentrations in the atmosphere and high global temperatures.

Today, scientists of the GEOMAR Helmholtz Centre for Ocean Research Kiel published model simulations in the international journal Nature Communications on the development of the oxygen content of the oceans up to the year 8000. In their scenario, they assume that a large part of the fossil resources will be burnt, that emissions will continue to rise until the end of the century and then decrease to zero by the year 2300. In the model, the planet heats up by a further 6 degrees, and temperatures remain at this high level until the end of the simulation.

The surprising result concerns the oxygen content of the ocean: After a further decrease over several hundred years, the oxygen inventory of the ocean rises again and even reaches a higher level than before industrialization in just under 4000 years. At first glance, it seems paradoxical that despite the expected further expansion of the already existing oxygen minimum zones in the world's oceans, the model yields an unexpected increase in oxygen as global temperatures rise.

It is known from investigations of the Kiel Collaborative Research Centre 754 that such oxygen-poor areas are death zones for larger organisms such as fish or cephalopods. However, certain bacteria that breathe nitrate instead of oxygen thrive there very well. "They draw their energy from a chemical process we call denitrification. It is an important component of the nitrogen cycle, that results in less oxygen being consumed during respiration of organic material than that produced during photosynthesis" explains Professor Oschlies.

In the new model simulation, the researchers have for the first time consistently coupled the oxygen cycle with the nitrogen cycle in such long-term global simulations. The researchers found that due to the extended oxygen minimum zones, more and more organic material is no longer respired with oxygen but with nitrate through denitrification. After several thousand years, the associated oxygen savings exceed the oxygen loss of the oceans caused by warming. "However, we cannot speak of a recovery, since the extensive oxygen minimum zones near the sea surface would stay. A large part of the additional oxygen goes into the deep ocean," says Angela Landolfi, co-author of the study.

However, there is a new problem: the anoxic phases that have occurred in Earth's history during warm climatic conditions are even more difficult to explain with the new findings. There are obviously factors and feedback processes in the complex interactions of biological, physical and chemical processes in the ocean that are not yet fully understood. "This is why the study is also important for the present. It points to knowledge gaps, such as the interaction of denitrification and nitrogen fixation, that can also be relevant for ongoing ocean changes," says Andreas Oschlies, summarising the significance of the study.

Please note:
This study was funded by the German Research Foundation within the framework of the Collaborative Research Centre 754 "Climate - Biogeochemical Interactions in the Tropical Ocean".

Currently, organic material in the ocean is mainly degraded with oxygen (left). Together with a warming of the ocean this leads to deoxygenation. In a future, warmer ocean (right), more organic material is respirated by denitrification with nitrate. The associated oxygen saving would even exceed the oxygen loss due to warming. Graphic: Rita Erven/GEOMAR