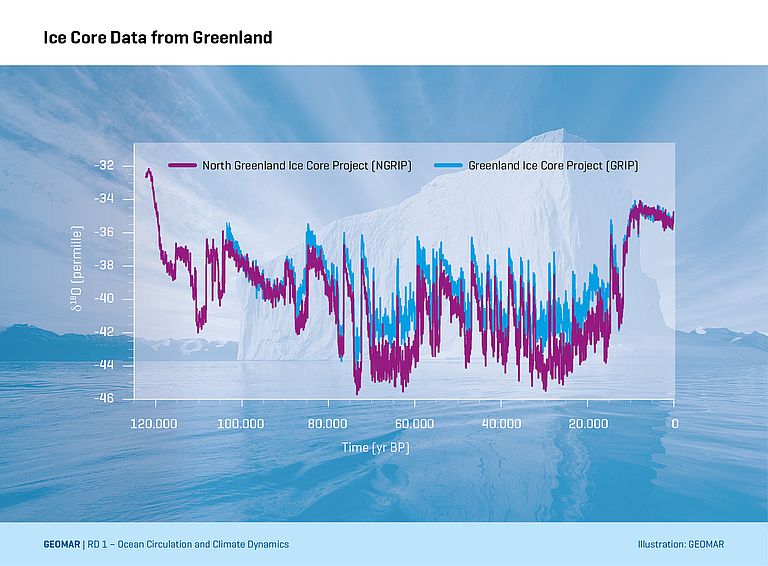 Temperature fluctuations of the past 130,000 years, reconstructed from ice-core data obtained in Greenland. A major goal of the PalMod project is to simulate this epoch with a state-of-the-art model. Illustration: GEOMAR 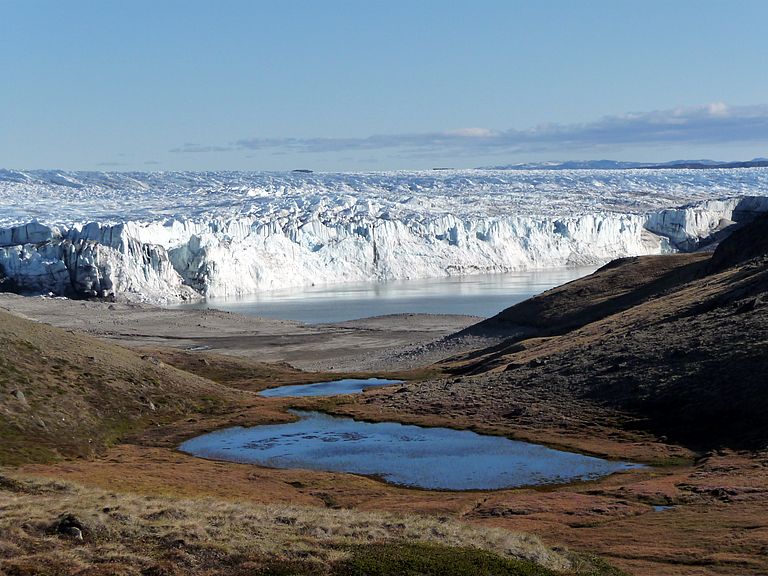 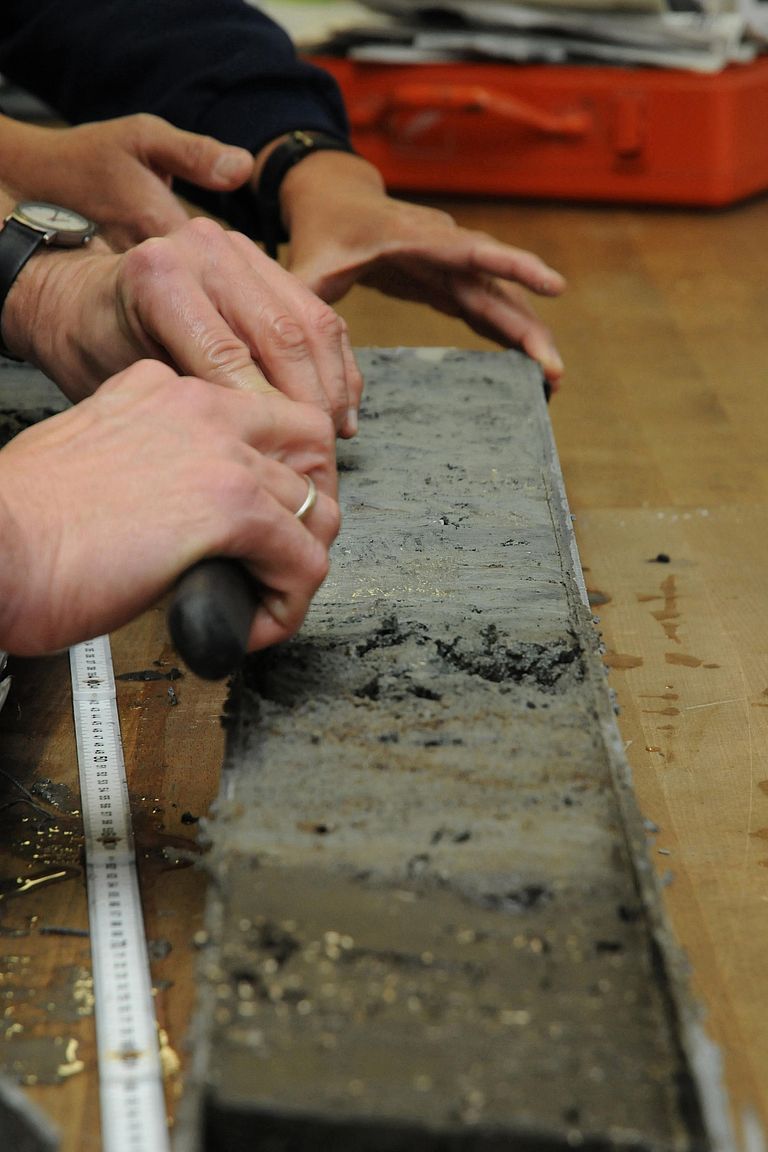 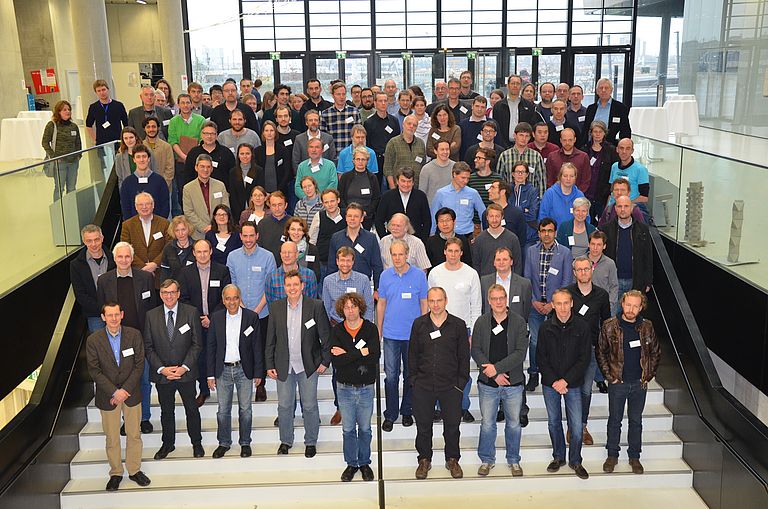 05 February 2015/Kiel. Model simulations help scientists to understand complex processes of the Earth system and to predict future developments. This includes, for example, weather predictions of the next few days as well as climate changes caused by human activities in the next centuries. 18 scientific institutions now have joined forces in the project PalMod to enhance the models’ capability to simulate past and future climate variability. The German Federal Ministry for Education and Research provides 18 million euros for the first, four-year phase of the project. The Programme Office is hosted by the GEOMAR Helmholtz Centre for Ocean Research Kiel.

It is impossible to foresee the future. Nevertheless, scientists regularly predict future developments. Examples are the daily weather forecast or climate projections for the next decades and centuries. They use computer models, based on the general laws of physics and fed with observational data, to simulate processes in the atmosphere, in the ocean or on land. “For many applications, these models are very reliable,” says Professor Dr. Mojib Latif, climatologist at the GEOMAR Helmholtz Centre for Ocean Research Kiel, “but there are also processes that we are still unable to simulate satisfactorily”.

In order to enhance climate modeling and to better understand past and future climate changes, 18 scientific institutions from all over Germany joined forces in the PalMod (Paleo Modelling) project. The Federal Ministry for Education and Research (BMBF) provides 18 million Euros for the first, four-year phase of the project. 1.6 million Euros go to the GEOMAR which, in addition to several subprojects, also hosts the Programme Office. The programme is coordinated by Professor Mojib Latif as a spokesperson jointly with Professor Dr. Martin Claussen (Max Planck Institute for Meteorology, Hamburg) and Professor Dr. Michael Schulz (MARUM - Center for Marine Environmental Sciences at Bremen University). This week, scientists of the participating institutes teamed up with representatives of the BMBF and the project executing agency (DLR) at the kick-off meeting in Hamburg.

One major goal of PalMod is to reconstruct the past 130,000 years of climate history in detail and to conduct reliable simulations of this epoch with state-of-the-art models. The period extends from the so-called Eemian through the last Ice Age into the present. “This period covers large temperature fluctuations with warm periods and ice ages, which we know very well from sediment cores of the oceans, from ice-core data and other climate archives”, says Professor Latif. Many of these climate changes can be simulated by models very well. “But the rapid changes, especially those during the last ice age are still difficult to simulate," explains the climatologist from Kiel.

At the same time, PalMod aims at improving future climate projections with models tested for past climate variability. “We know that there have been rapid sea level rises of several meters in the transition from the last ice age to the current interglacial period. Can something similar happen in the next centuries as a result of global warming?” Latif adds. Therefore, the planned long, transient climate model integrations to be conducted during PalMod will not end at today's climate, but will include scenarios until the end of this millennium.

One of the main challenges in climate modeling is limited computing power. A computer model that simulates 130,000 years of Earth's climate history, including the rapid processes in the atmosphere, in the ocean and in the ice sheets, subfloor dynamics and feedbacks between all these components requires vast amounts of computing time even on state-of-the-art supercomputers. “That's why in PalMod, many computer scientists closely collaborate with climate scientists. This is to speed up the models to reduce computational load,” explains Dr. Tim Brücher, head of the PalMod Programme Office at GEOMAR. Another important component of the project is the comparison of model simulations with data from climate archives contributed from paleoceanography or paleoclimate research. “If we prepare data in such a manner that they can be compared with simulations from climate models, eventually we get more reliable models,” says Dr. Brücher.

“This is currently one of the largest projects to enhance climate models,” says Professor Latif. This is also reflected in the range of disciplines involved and the number of partners. Amongst them are university departments, institutes of the Max Planck Society and the Leibniz Association, as well as research centres of the Helmholtz Association. “The better and more detailed we can simulate the past with the models, the more reliable our predictions for the future will be”, Professor Latif summarizes.

Temperature fluctuations of  the past 130,000 years, reconstructed from ice-core data obtained in Greenland. A major goal of the PalMod project is to simulate this epoch with a state-of-the-art model. Illustration: GEOMAR

Temperature fluctuations of the past 130,000 years, reconstructed from ice-core data obtained in Greenland. A major goal of the PalMod project is to simulate this epoch with a state-of-the-art model. Illustration: GEOMAR