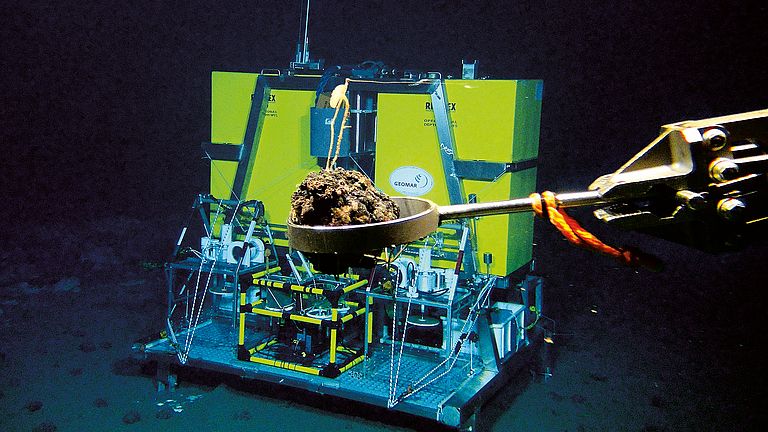 An elevator lander during expedition SO242 with the research vessel SONNE on the seafloor of the DISCOL area. Disturbances caused by deep-sea mining were simulated there in 1989. With this device, several experiments can be carried out simultaneously on the seabed. In the foreground: Manganese nodule held by the manipulator arm of the ROV. Photo: ROV KIEL 6000/ GEOMAR 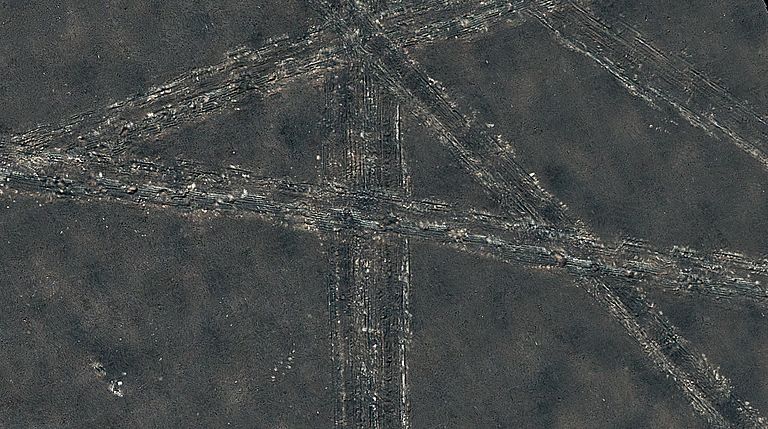 In 1989, during the DISCOL project, researchers towed a plough-harrow 78 times across the abyssal seafloor. Using the ABYSS autonomous underwater vehicle, the researchers were able to produce high-resolution maps that show the precise location of the tracks after 26 years. Source: GEOMAR 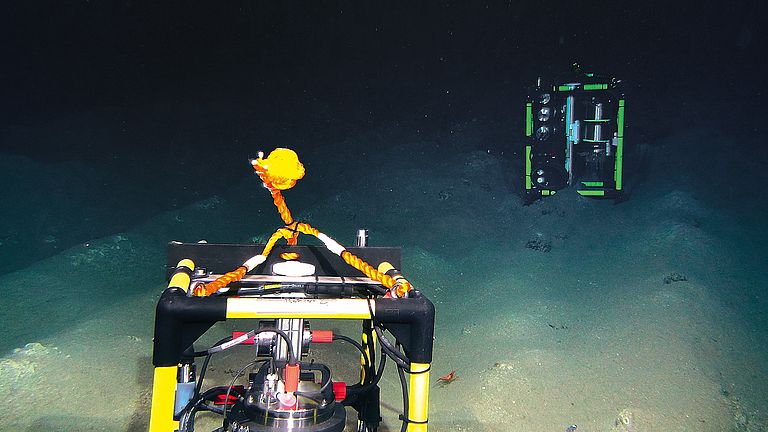 Sensor instruments deployed on a plough track. Different biological, chemical and oceanographic data were collected inside and outside the plough tracks. The investigations showed that after 26 years even bacterial activities in the tracks are still reduced by about 30 percent compared the undisturbed seabed. Photo: ROV KIEL 6000/ GEOMAR 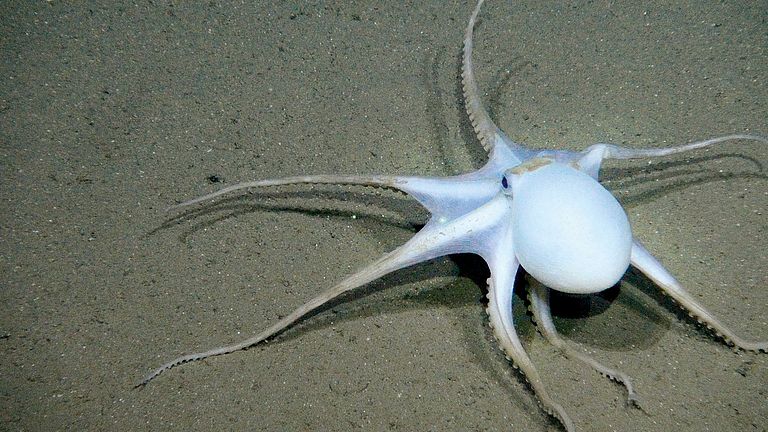 Manganese nodules on the seafloor of the Pacific Ocean form a very special ecosystem with a very high diversity and abundance of fauna. Researchers had observed a previously unknown octopus species in 2015 in the Peru Basin at a depth of more than 4,000 meters - a new depth record for this species. Photo: ROV KIEL 6000/ GEOMAR 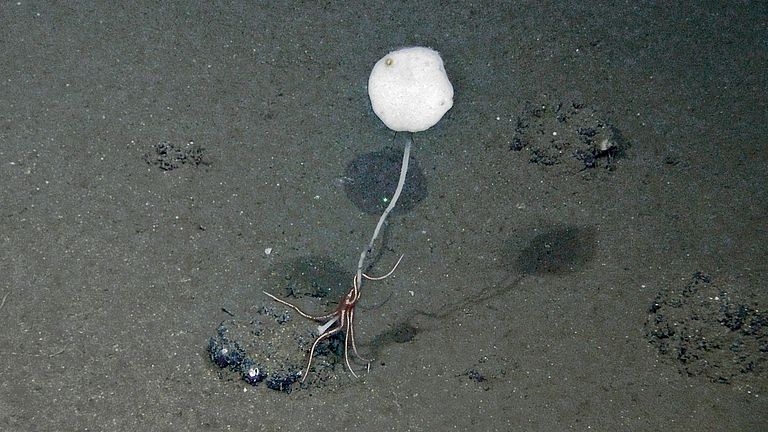 Stalked sponges form an important structure in the manganese nodule areas. The sponge stalks are attached to the manganese nodules and serve as specific habitat for other deep-sea fauna. Among others, brittle stars, barnacles, and isopods live on these up to one metre long structures. They also provide an important breeding ground for deep-sea squid. Photo: ROV KIEL 6000/GEOMAR 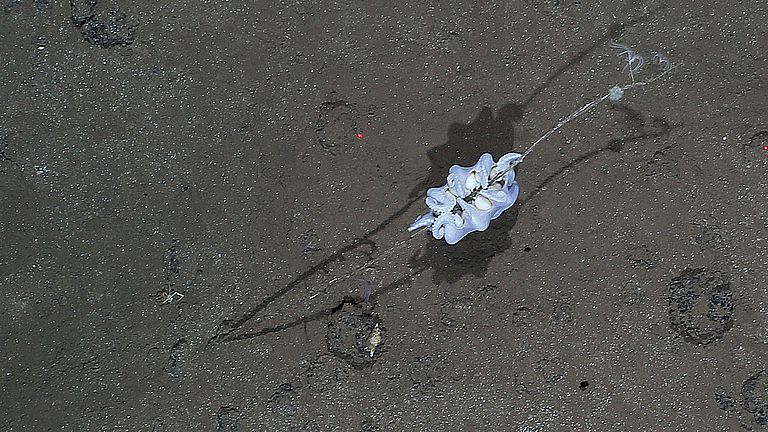 The octopods attach their eggs to stalked sponges, which only grow attached to the manganese nodules. They hatch their eggs hanging from the stalk probably for several years and die afterwards. Their special dependence on manganese nodules as breeding grounds emphasizes that industrial mining of valuable metals in the deep sea must be preceded by thorough investigations of the ecological consequences. Photo: AWI-OFOS Launcher team 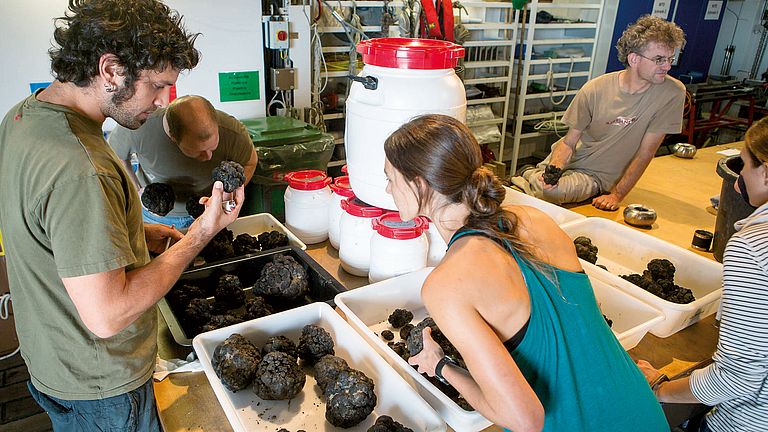 First inspection of manganese nodules on board RV SONNE during Expedition SO242. The manganese nodules are measured and weighed, and the fauna growing attached to them is determined and counted. Photo: Bastian Barenbrock. 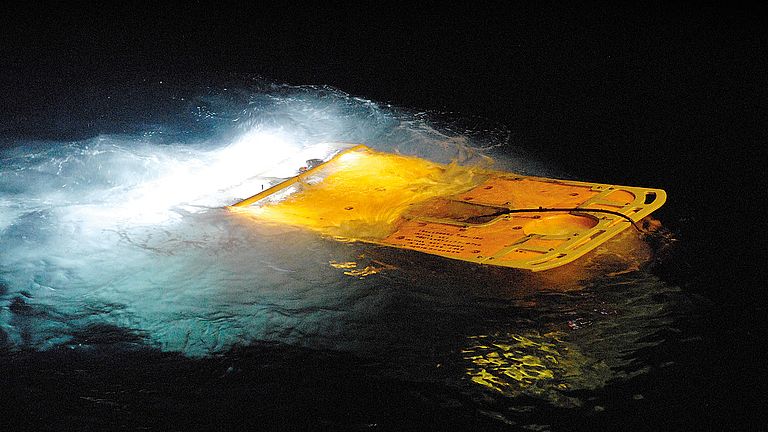 ROV KIEL6000 returns from a mission targeting samples from the disturbances and measure microbiological activities. During SO242, 23 dives were carried out with the diving robot in more than 4,000 meters water depth with a total time of more than 250 hours. Photo: Peter Linke/GEOMAR

What consequences for the abyssal ecosystem result from mining of metal resources in the deep sea? How can the unavoidable ­environmental impacts be kept to a minimum? Which environmental standards and threshold values can be defined? And how can compliance with mining regulations be monitored? The international project MiningImpact, coordinated at GEOMAR with researchers from 11 European countries, aims to assess the long-term impacts and environmental risks of deep-sea mining of manganese nodules. In 2015, three expeditions were carried out in the Clarion-Clipperton-Zone (CCZ) and in the DISCOL area in the Peru Basin to investigate the ecosystem’s ­response to seafloor disturbances after several decades. During ­another expedition in 2019 technology for the environmental monitoring of deep-sea mining activities developed at the institutes was tested.

Flashback, 1989, DISCOL project (DISturbance and re-COLonisation): German marine scientists are conducting an unique experiment. They plough about eleven square kilometres of seabed in a deep-sea plain far offshore Peru. They remove manganese nodules from the surface, suspend the sediment, and destroy the fauna on a small scale. All of this serves a scientific purpose – the scientists want to find out what ecological consequences manganese nodule mining would have, how long it would take for the ecosystem to recover, and if it would be possible to manage deep-sea resource extraction in an environmentally friendly way.

26 years later, in 2015, state-of-the-art technologies helped an international research team to assess the possible longer-term consequences of mining. During the SO242 expedition with the research vessel SONNE, precise maps of the plough tracks on the seabed were produced. Photos and videos gave the researchers a comprehensive and detailed impression of the environmental impact. The diving robot ROV Kiel 6000 was used to collect targeted samples from the disturbances, measure microbial activities and carry out toxicological experiments on the seabed at a depth of more than 4,000 metres.

The main results that were derived by the MiningImpact project from investigating these small seabed disturbances with respect to the anticipated much larger future industrial-scale deep-sea mining operations are that the environmental impacts will be long-term and will affect all ecosystem compartments. For many decades to centuries, the composition of faunal communities will be altered, and population densities and biodiversity of fauna as well as ecosystem functions such as productivity and microbial activity will be greatly reduced.

An environmental risk that has been difficult to assess so far is the spread of the suspended sediment plumes and the additional impact area at the seabed resulting from it. In spring 2019, MiningImpact therefore carried out extensive tests of sensors and methods for environmental monitoring in some licence areas of the CCZ.

Due to the sustained destruction of the deep-sea ecosystem in the mining areas and their vicinity, the international regulations of ISA must therefore include not only strategies for comprehensive environmental monitoring but also concepts for environmental management and adaptive spatial planning. This poses a major challenge because the deep-sea and in particular the manganese nodule habitats are highly diverse and variable and species connectivity over long distances is not understood at the moment. The MiningImpact project develops proposals for solutions.

This video was filmed during the research cruise SO268-2 from April to May 2019. The expedition was integrated into the second phase of the European  joint project MiningImpact