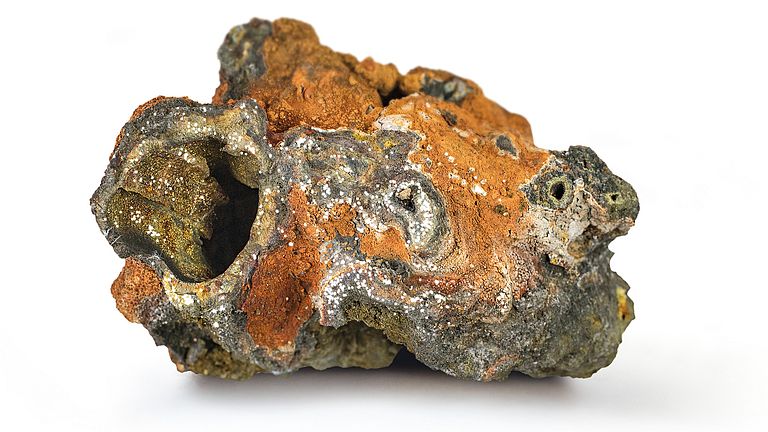 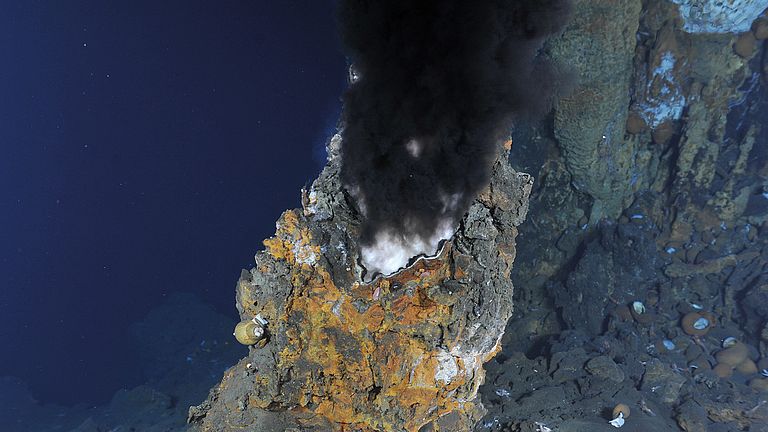 Black Smoker in the crater of the Niua underwater volcano in the Lau basin between Fiji and Samoa. In April 2016, an international research team led by GEOMAR mapped, for the first time, a complete hydrothermal field with centimetre precision in the Niua South Crater. Photo: GEOMAR / Schmidt Ocean Institute / CSSF 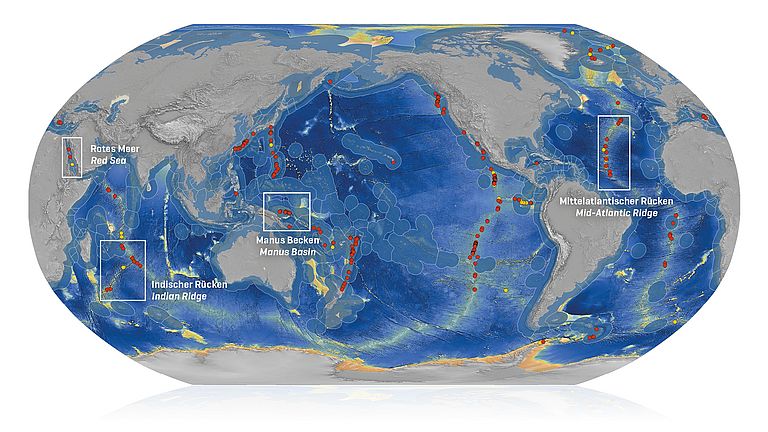 Distribution of known active (red) and inactive (yellow) black smokers in the ocean. Areas of special economic interest and boundaries of exclusive economic zones (EEZ) are highlighted. Large areas, particularly in the southern oceans, have not yet been explored and occurrences in these regions can therefore not be shown on the map. (as of 2019). Map: Sven Petersen/GEOMAR

Black Smokers are hydrothermal vents in volcanically active zones of the deep ocean. The black “smoke”, which exits from the up to 30 meter high chimneys, consists of finely distributed sulphide particles. The chimneys themselves and the mounds they are commonly located on also consist of metal-sulphur compounds, the so-called massive sulphides.

In 1979, the American research submarine Alvin dived into the Pacific Ocean. Through the small portholes of the pressurized hull, the crew saw meter-high chimneys on the seabed at a depth of around 2,600 meters, from which apparently black clouds of smoke were expelled. The scientists had discovered the first hydrothermal vents, so-called “Black Smokers”. Investigations showed that minerals were deposited around the springs, forming deposits of so-called massive sulphides. In the meantime, more than 410 occurrences are known in all oceans, although there are enormous differences in the size of these features. Hydrothermal vents are not only a source of raw materials, but also an extraordinary habitat.

In recent years the economic interest in massive sulphides has increased. The first mining licence for massive sulphides around a weakly active hydrothermal system was granted in 2011 for a deposit off the coast of Papua New Guinea. However, commercial mining has not begun yet.

As things stand, only a few of the known massive sulphide deposits appear to have sufficient size and metal content to be exploited economically. New exploration technologies, still to be developed, can extend the search beyond small, active deposits and help discover large, inactive deposits beyond volcanically active zones. Nevertheless, the raw material potential of massive sulphides appears to be rather small compared to that of manganese nodules or cobalt-rich manganese crusts. However, due to the three-dimensional character of the deposits, the environmental impact of mining is presumably significantly lower than the large areas to be expected from mining nodules and crusts.

The first life on Earth could have originated at black smokers in the deep sea. In the course of millions of years, an ecosystem has developed here that is perfectly adapted to conditions that are commonly hostile to life. In an environment of absolute darkness, extreme water pressure, toxic metal compounds and water heated to more than 350 degrees Celsius, a unique community of species can be found. This ecosystem is based on mats of primeval microorganisms, which draw their energy from the conversion of sulphur and methane independently of light.

At the bottom of the sea, in a depth of several thousand metres, black smokers bring up valuable raw materials from inside the earth. Their metre-high vents seem to give off smoke like under water industrial chimneys.