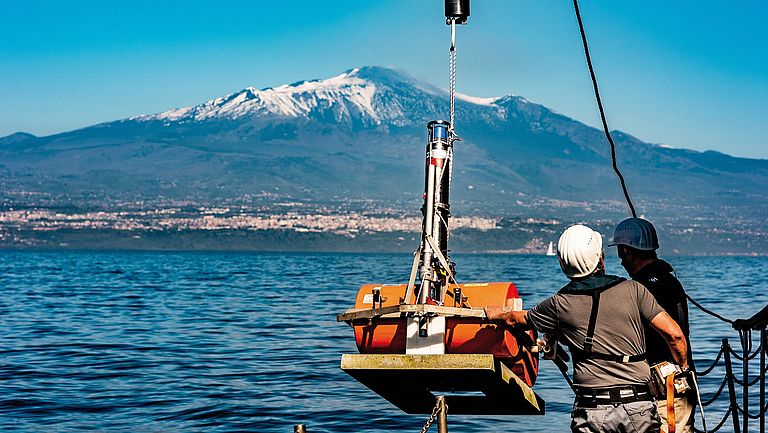 Installation of geodesy stations on the southeast flank of Etna. For the first time, it was possible to prove that the flank also moves under water. A sudden sliding of the entire slope could lead to a tsunami with serious consequences for the entire region. Photo: Felix Gross 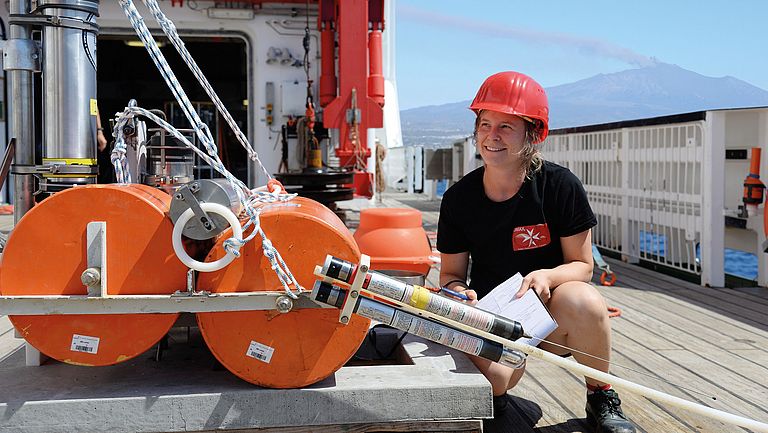 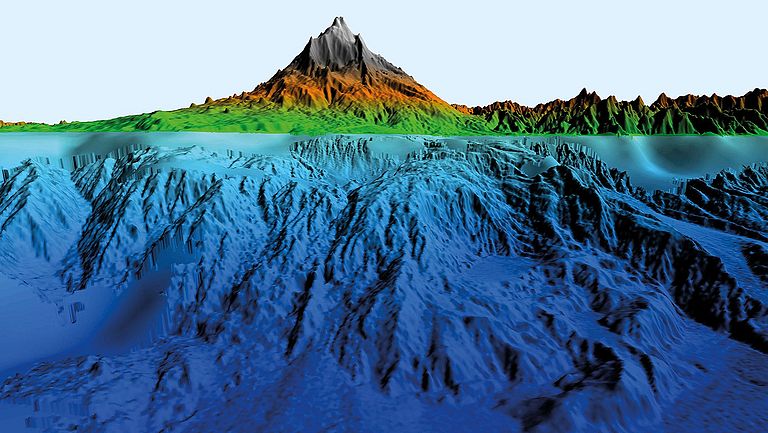 Submarine eastern flank of Etna volcano in Sicily. The key to better understanding the collapse of a volcanic flank is to combine observations from the part of the volcano that is above water with those below. Visualization: Felix Gross 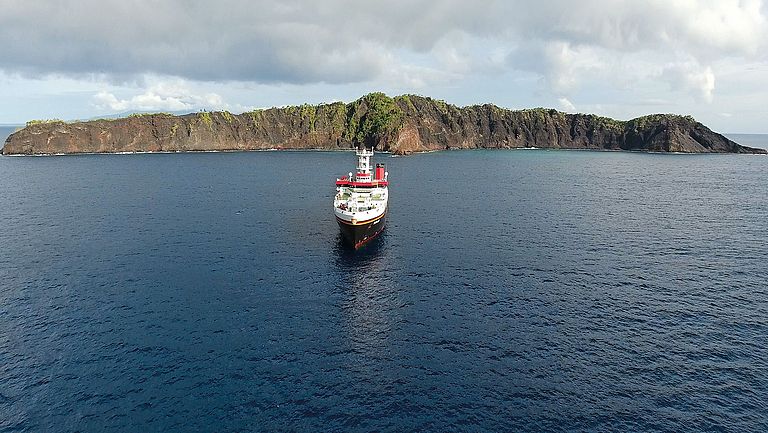 Among the volcanoes being studied in the PRE-COLLAPSE project is Ritter Island in Papua New Guinea. A major flank collapse occurred here in 1888. Photo Christian Berndt/GEOMAR 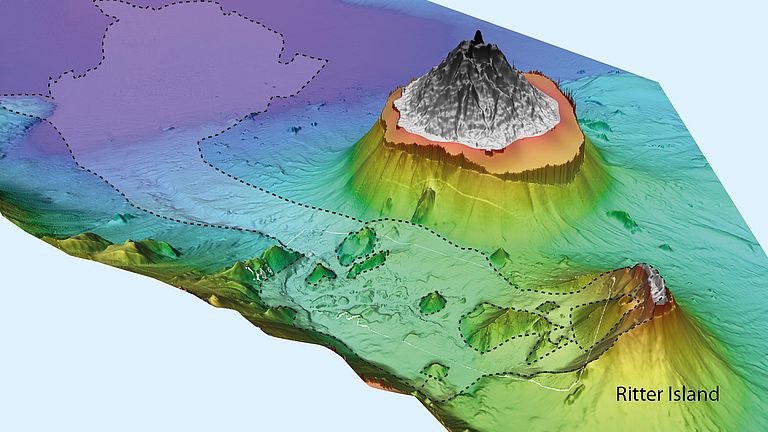 Ritter Island and the surrounding seafloor with traces of the landslide of March 13, 1888. On that day, the east coast of New Guinea, 150 kilometers away, was hit by a tsunami caused by the catastrophic collapse of Ritter Island's volcano. Visualization: Jens Karstens/GEOMAR 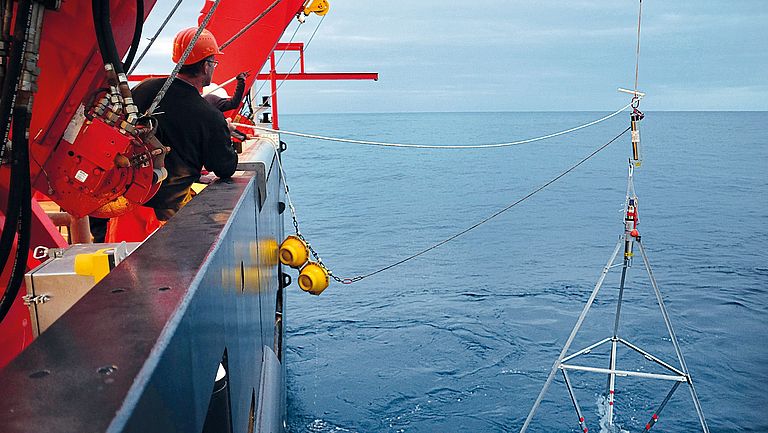 The research vessel SONNE deployed more than 20 GeoSEA tripods in water depths of 2,000 to 6,000 meters off the coast of northern Chile from late November to mid-December 2015. Photo: Jan Steffen/GEOMAR 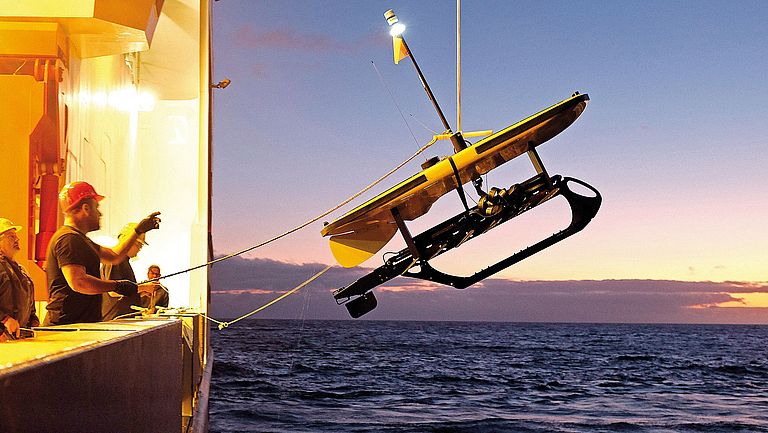 Launching a waveglider during expedition SO244 to communicate with the GeoSEA network. Photo: Jan Steffen/GEOMAR 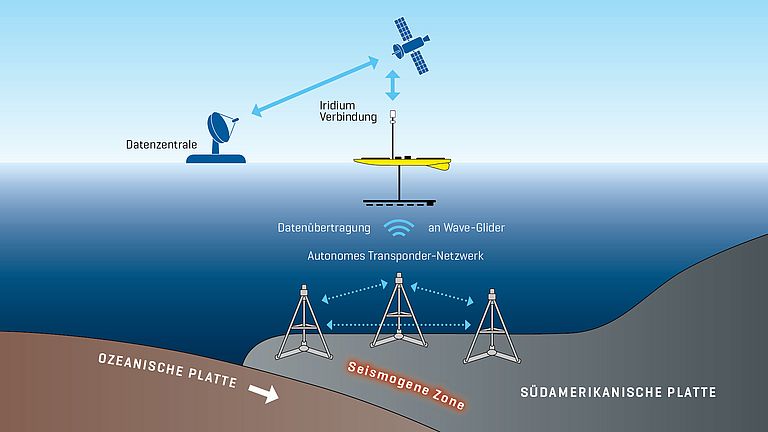 The GeoSEA array in front of Chile: The tripods use sound to measure the distance between each other, allowing movements of the subsurface to be detected in the millimeter range. A waveglider collects the data from the GeoSEA array and sends it to headquarters via satellite. Graphic: Christoph Kersten/GEOMAR

The earthquakes in Indonesia in 2004 and Japan in 2011 with the subsequent tsunamis demonstrated the risks for population and infrastructure not only in coastal regions but also far beyond. In order to better assess natural hazards from the sea and protect ourselves, for example through early warning systems, we need to better understand the underlying processes and monitor the development of the sea floor closely.

In 2018, researchers from Kiel were able to demonstrate for the first time that the eastern flank of Etna volcano, which descends into the Mediterranean Sea, is slowly moving downslope under water. These movements could be interpreted as an indication of an imminent collapse of the volcano's flank at some point in the future. Such a collapse would most likely result in a tsunami. But when exactly is there a danger of flank collapse? How can this danger be better estimated? Geoscientist Dr. Morelia Urlaub from GEOMAR is working on answering these questions. She received a prestigious Starting Grant from the European Research Council for her project PRE-COLLAPSE. PRE-COLLAPSE focuses on the volcanoes Etna (Italy), Anak Krakatau (Indonesia), Ritter Island (Papua New Guinea) and Kilauea (Hawaii, USA). On-site measurements, numerical models, and laboratory experiments on volcanic rocks will combine to provide new insights into what mechanisms trigger large flank collapses. The measuring instruments deployed on Etna in the fall of 2020 will also contribute important data to the project.

The coast off Chile is a highly earthquake-prone region, where an oceanic earth plate dips below the South American continent and tectonic stresses build up in the process. To record these and better assess the risk of strong earthquakes, the geodetic network GeoSEA was installed off northern Chile in 2015 on expedition SO244 with the German research vessel SONNE. GeoSEA is a mobile autonomous network of seafloor stations to record active deformations of the seafloor. Just over six years after deployment, GeoSEA has now been recovered as part of SONNE expedition SO288. The findings will contribute to a better understanding of geological risks in the region and to the further development of seafloor observation systems.

Gaining a better understanding of earthquakes and potential risks

Seismic data can support natural hazard warning in the future

Earthquakes and tsunamis in Europe?

Core Theme Ocean Threats and Benefits
How can we forecast marine natural hazards and use resources from the seafloor in a responsible way?