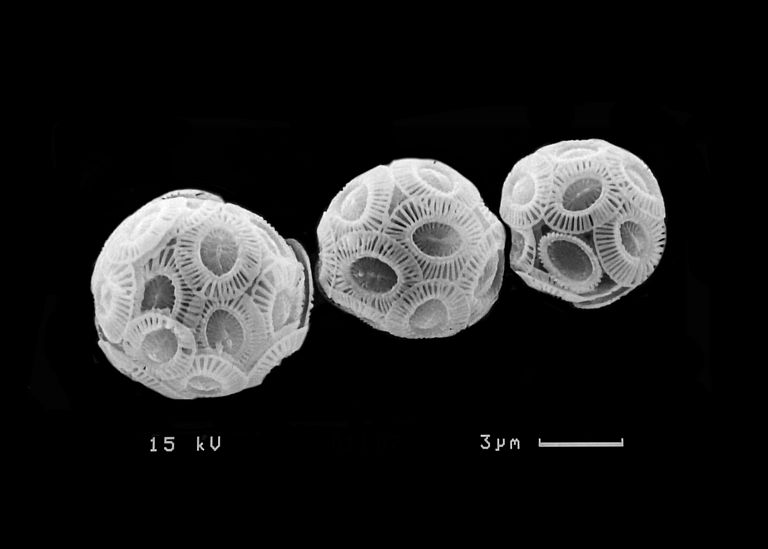 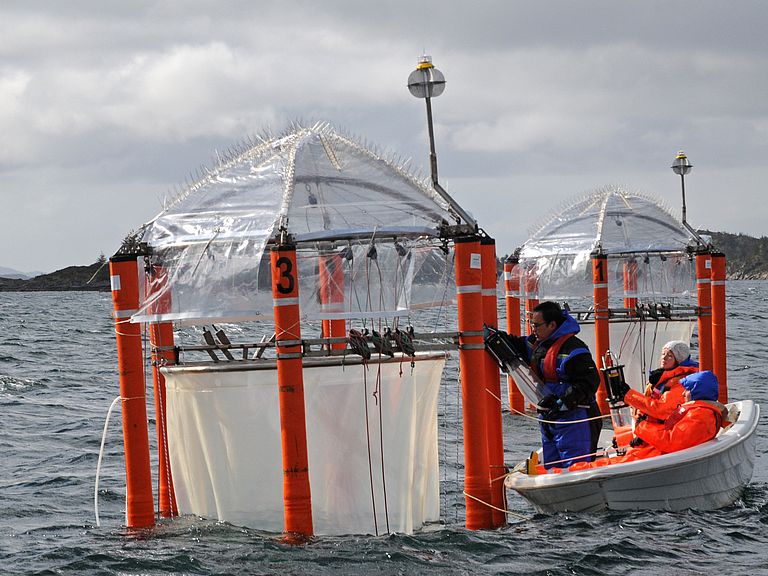 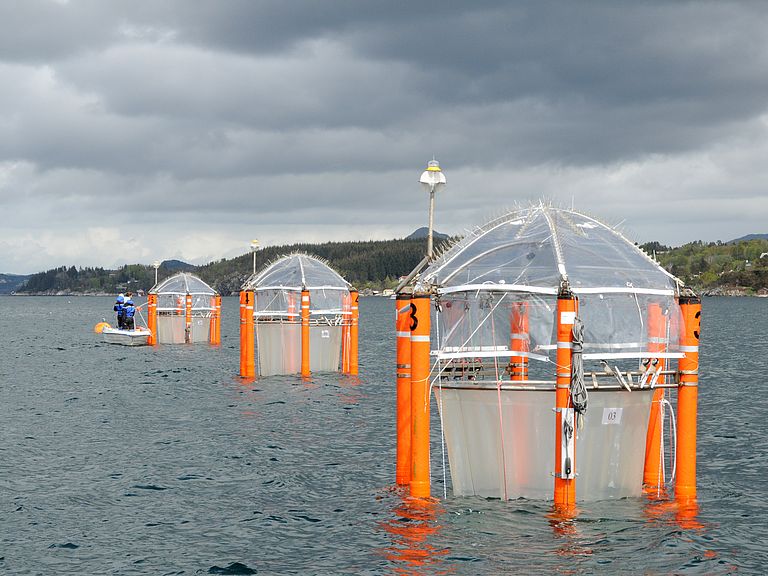 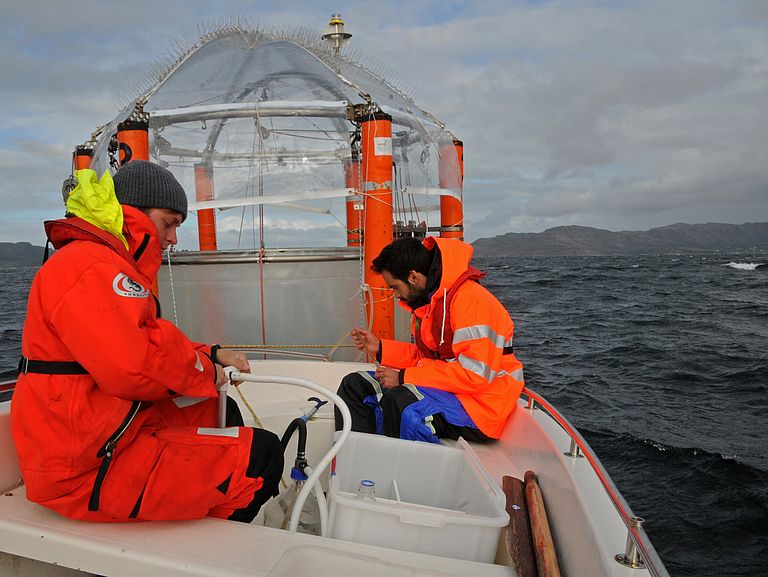 Pumping sediment from the sediment traps at the lower end of the mesocosms. Photo: Maike Nicolai, GEOMAR

A small change with a large impact

14 December 2016/Kiel/Bergen/Southern Cross. Coccolithophores, single-celled calcifying phytoplankton that play a key role in the Earth’s climate system, might lose their competitive fitness in a future ocean. In a field experiment investigating the effects of ocean acidification on the coccolithophore Emiliania huxleyi in its natural environment, the species failed to form blooms. It is especially in these periods of exponential growth that the algae contribute massively to elemental cycling, including the transport of carbon to the deep ocean. Based on their observations, a team of researchers led by GEOMAR Helmholtz Centre for Ocean Research Kiel concludes, that a small physiological response to ocean acidification was amplified through ecological interactions large enough to cause a massive impact on the ecosystem. The results of the study are published in the journal Nature Geoscience.

The uptake of fossil fuel carbon dioxide (CO2) by the ocean increases seawater acidity and causes a decline in carbonate ion concentrations. This process, termed ocean acidification, makes it energetically more costly for calcifying organisms to form their calcareous shells and skeletons. Several studies have shown that this also holds true for Emiliania huxleyi, the world’s most abundant and most productive calcifying organism. When exposed to ocean acidification in controlled laboratory experiments, growth and calcification rates of the single-celled alga are slightly reduced. Even after more than two thousand generations under acidified conditions, these responses still prevail to some extent, suggesting that evolutionary adaptation may not be able to completely eliminate the negative effects of ocean acidification. But what this means in terms of the alga’s ability to maintain competitive fitness in its natural environment when the ocean continues to acidify was still an open question.

To address this question, a team of researchers led by GEOMAR Helmholtz Centre for Ocean Research Kiel conducted a field experiment using the KOSMOS (Kiel Off-Shore Mesocosms for Ocean Simulations) experimental platform. As part of the research projects SOPRAN (Surface Ocean Processes in the Anthropocene) and BIOACID (Biological Impacts of Ocean Acidification) the KOSMOS system was deployed in the Raunefjord at the west coast of Norway, were blooms of Emiliania huxleyi regularly occur in late spring. Each of the nine KOSMOS units enclosed about 75 cubic metres of seawater in a 25 metres long plastic bag. The “giant test tubes” were brought to carbon dioxide concentrations ranging from present to projected mid-of-next-century levels. For six weeks, the scientists measured various parameters and took samples for further analyses. Sinking particles were collected in funnel-shaped sediment traps at the lower end of the mesocosms and analysed as well.

“In view of Emiliania’s rather small changes in metabolic performance observed in previous laboratory experiments, we predicted that it would still be able to maintain its ecological niche in an acidifying ocean. What we observed came as a big surprise,” says Prof. Ulf Riebesell, marine biologist at GEOMAR Helmholtz Centre for Ocean Research Kiel and coordinator of the KOSMOS experiments. In the mesocosms simulating future ocean conditions, Emiliania failed to form a bloom. Detailed analysis of the data revealed that Emiliania’s downfall started well before the bloom period. A small reduction in cellular growth due to ocean acidification caused the population size to gradually decline during the pre-bloom phase. “When it was time for Emiliania to start bloom formation, there were so few cells left in the plankton community that it couldn’t outgrow its competitors anymore,” reflects Ulf Riebesell.

The loss of competitive fitness in the calcifying alga had strong impacts on the ecosystem. “The flux of organic matter to depth was strongly reduced in the absence of bloom formation“, explains Dr. Kai Schulz, marine biogeochemist at Southern Cross University, Australia. The reason is that Emiliania’s dense calcareous platelets function as ballast in aggregated organic matter and accelerate its sinking to the deep ocean. “Without the chalky ballast the aggregates sink more slowly and bacteria have more time to degrade the organic matter in the surface layer. As a result of this, more of the CO2 bound in organic matter remains in the surface layer, which reduces the ocean’s potential to take up atmospheric CO2.”

Another feedback could result from the fact that Emiliania is one of the dominant producers of dimethylsulfide, a volatile gas which is thought to serve as cooling agent in the climate system. Whereas high concentrations of this gas were recorded in the mesocosms were Emiliania was blooming, they were greatly reduced in the mesocosms simulating future conditions. Less CO2 uptake by the ocean and lower production of the cooling agent dimethylsulfide would both work in the same direction, reducing the ocean’s capacity to mitigate global warming.

The results of this study demonstrate the importance of investigating the effects of ocean acidification in natural communities. Small changes in an organism’s metabolic performance can have major consequences for its success in its natural habitat, where it is in competition with other species and faces losses from predation or viral infection. “If Emiliania huxleyi fails to maintain its important role, other, possibly non-calcifying, organisms take over. This might initiate a regime shift with far-reaching ecological and biogeochemical consequences”, Prof. Riebesell concludes.

Pumping sediment from the sediment traps at the lower end of the mesocosms. Photo: Maike Nicolai, GEOMAR