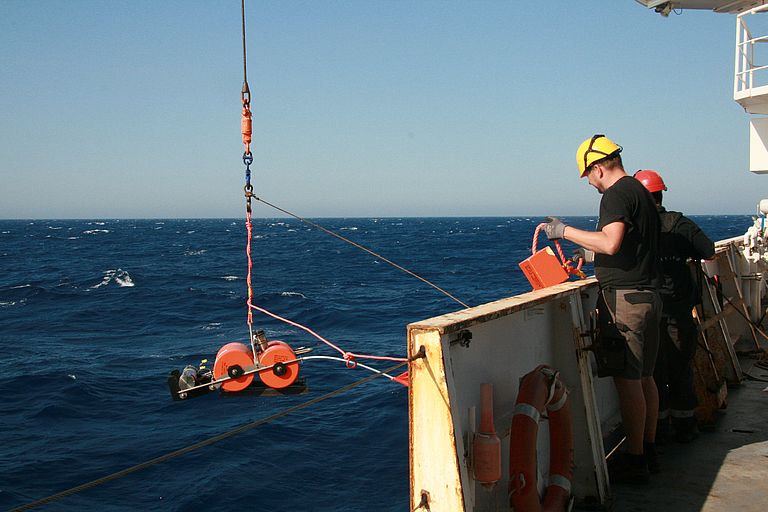 In summer 2017 30 ocean bottom seismometers were deployed from the French research vessel POURQUOI PAS? into the Ligurian Sea. During the current journey, they are recovered to evaluate the recorded data. Picture: Catherine Prequegnat/CNRS 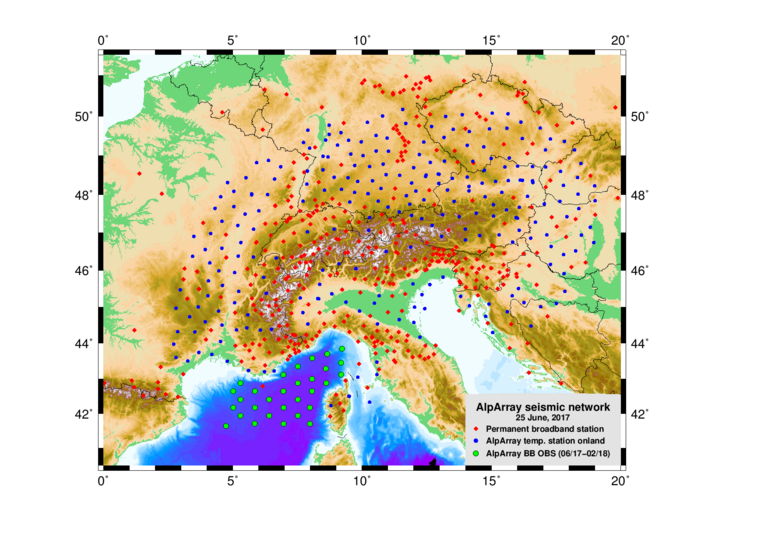 The AlpArray project covers the Alps with a dense network of seismic stations. The green dots show the ocean bottom seismometers in the Ligurian Sea. Chart: AlpArray 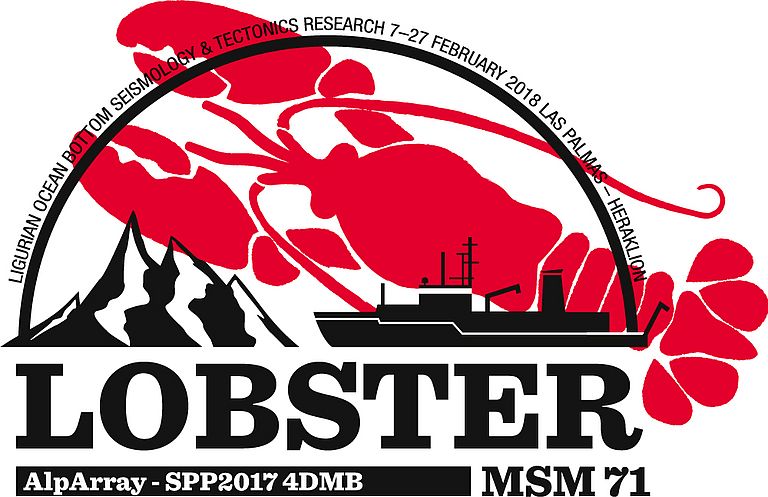 Alpine research in the Deep Sea – how does that fit together?

GEOMAR investigates the ‘Ligurian Knot’ as part of the AlpArray project

05.02.2018/Kiel. The Alps were formed about 130 million years ago by the collision of the Eurasian and the African tectonic plates. Strong tectonic forces are still active in the earth’s crust. But what exactly happens when two tectonic plates collide? The large-scale European research project AlpArray aims at answering this question. The GEOMAR Helmholtz Centre for Ocean Research Kiel together with the Institut de Physique de Globe in Paris cover the marine part of the project. On 7 February, an expedition will start to the Ligurian Sea off the coast of France and northern Italy.

Europe's largest 'crumple zone', the Alps, lies on the border of two major tectonic plates: Europe and Africa. Between these two plates a number of smaller microplates are trapped in the Alpine region. The formation of the Alps thus takes place in a tectonically complex region, which extends far beyond the mountain chain proper. Understanding the deep structure of the Alpine crust and mantle, and hence mountain building processes, requires a multinational and multidisciplinary approach. As part of the AlpArray project, 50 scientific institutions from 18 European countries have joined forces to cover the Alpine region with a dense network of seismometers to record the signals from the deep in high resolution.

In this mammoth task, the GEOMAR Helmholtz Centre for Ocean Research Kiel together with the Institut de Physique du Globe Paris focus on the marine part. “After all, the Ligurian Sea off the coast of France and northern Italy also belongs to the Alpine region, which is characterized by the mountains stretching far into the Mediterranean,” says Prof. Heidrun Kopp from GEOMAR. She is chief scientist on an expedition with the German research vessel MARIA S. MERIAN, which starts on 7 February 2018 in the port of Las Palmas (Spain). On this voyage, the scientists will retrieve 30 ocean bottom seismometers (OBS) which are monitoring earthquake activity in the Ligurian Sea since their deployment in June 2017. In addition, the team will study the transition from the oceanic to the continental domain by means of active seismic measurements.

“The Ligurian Sea is also known as the ‘Ligurian Knot’ among geoscientists. The name derives from the complex setting at the transition between the Alps and the Apennines, which is accompanied by a change of dip of the plate movement - here several tectonic plates are tightly knotted, so to say," explains Dr. Dietrich Lange from GEOMAR. “These processes take place at great depth. Therefore, we use OBS to illuminate structures of the crust and the mantle - similar to a medical tomography. The OBS use weak to strong earthquake signals as well as artificially created acoustic waves and the background noise of the ocean floor and the water column.”

In order to reproduce detailed structures in great depth with high resolution, a large number of instruments is needed, which autonomously register the signals on the seabed over a long period of time. "We combine both our expertise and our infrastructure with our French and Italian colleagues in order to decode the complexity of the studied area and the tectonic processes in the Alpine region on an European level," explains project coordinator Prof. Heidrun Kopp.

"Within the AlpArray consortium we share logistic and ship-time costs as well as the required infrastructure with our partners in different nations, which is essential for the success. A project of this scale, which covers the entire area of the Alps including the Alpine foreland, is only possible on an international European level," Heidrun Kopp stresses. She adds: “In this form, AlpArray is globally unique, in particular because it is supported on the national level by all participating countries. In Germany, a priority program of the German Science Foundation has been established for this purpose. Our job as marine geophysicists is to cover the marine part of the Alps. The use of deep-sea instruments in several thousand meters of water depth is associated with a much greater effort than for the majority of land stations. "

In summer 2017 30 ocean bottom seismometers were deployed from the French research vessel POURQUOI PAS? into the Ligurian Sea. During the current journey, they are recovered to evaluate the recorded data. Picture: Catherine Prequegnat/CNRS

The AlpArray project covers the Alps with a dense network of seismic stations. The green dots show the ocean bottom seismometers in the Ligurian Sea. Chart: AlpArray