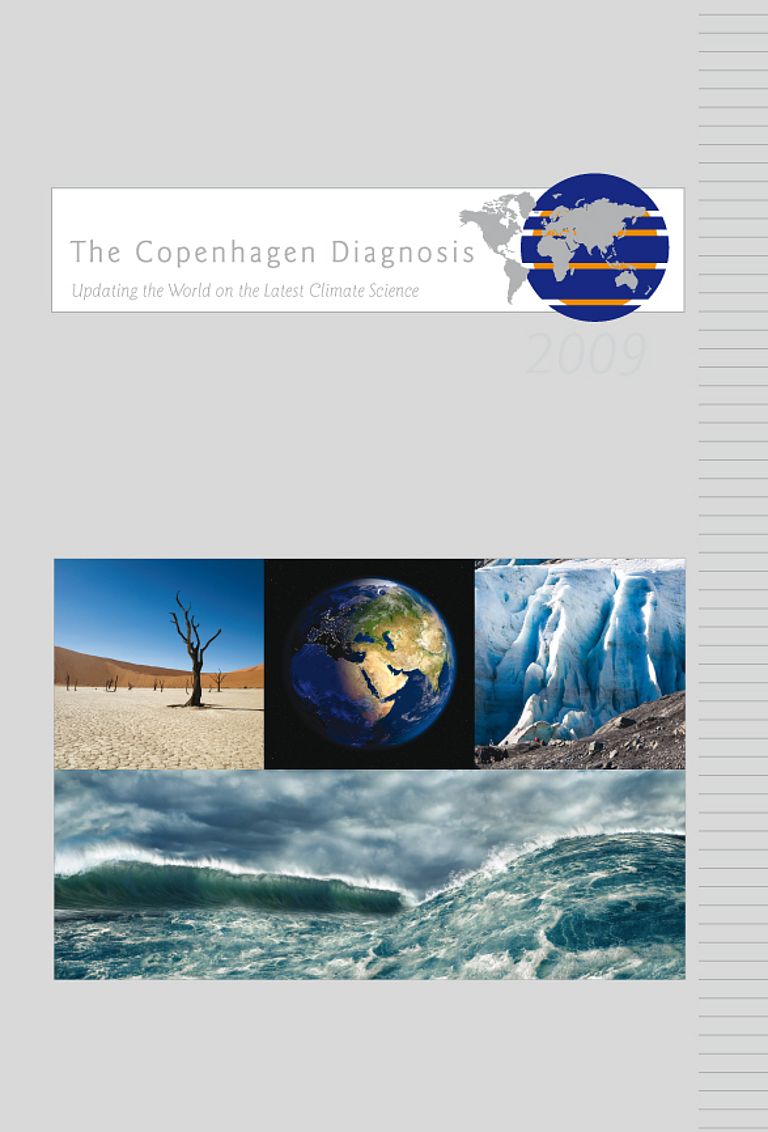 Title Page of the Copenhagen Diagnosis

Observed (red line) and modeled September Arctic sea ice extent in millions of square kilometers. The solid black line gives the ensemble mean of the 13 IPCC AR4 models while the dashed black lines represent their range. From Stroeve et al. (2007) updated to include data for 2008. The 2009 minimum has recently been calculated at 5.10 million km2, the third lowest year on record, and still well below the IPCC worst case scenario.

Global ice-sheets are melting at an increased rate; Arctic sea-ice is disappearing much faster than recently projected, and future sea-level rise is now expected to be much higher than previously forecast, according to a new global scientific synthesis prepared by some of the world’s top climate scientists.
In a special report called ‘The Copenhagen Diagnosis’, the 26 researchers, most of whom are authors of published IPCC reports, conclude that several important aspects of climate change are occurring at the high end or even beyond the expectations of only a few years ago.
The report also notes that global warming continues to track early IPCC projections based on greenhouse gas increases.  Without significant mitigation, the report says global mean warming could reach as high as 7 degrees Celsius by 2100.
The Copenhagen Diagnosis, which was a year in the making, documents the key findings in climate change science since the publication of the landmark Intergovernmental Panel on Climate Change (IPCC) Fourth Assessment Report in 2007.

The new evidence to have emerged includes:
• Satellite and direct measurements now demonstrate that both the Greenland and Antarctic ice-sheets are losing mass and contributing to sea level rise at an increasing rate.
• Arctic sea-ice has melted far beyond the expectations of climate models. For example, the area of summer sea-ice melt during 2007-2009 was about 40% greater than the average projection from the 2007 IPCC Fourth Assessment Report.
• Sea level has risen more than 5 centimeters over the past 15 years, about 80% higher than IPCC projections from 2001. Accounting for ice-sheets and glaciers, global sea-level rise may exceed 1 meter by 2100, with a rise of up to 2 meters considered an upper limit by this time.  This is much higher than previously projected by the IPCC.  Furthermore, beyond 2100, sea level rise of several meters must be expected over the next few centuries.
• In 2008 carbon dioxide emissions from fossil fuels were ~40% higher than those in 1990. Even if emissions do not grow beyond today’s levels, within just 20 years the world will have used up the allowable emissions to have a reasonable chance of limiting warming to less than 2 degrees Celsius.

The report concludes that global emissions must peak then decline rapidly within the next five to ten years for the world to have a reasonable chance of avoiding the very worst impacts of climate change.
To stabilize climate, global emissions of carbon dioxide and other long-lived greenhouse gases need to reach near-zero well within this century, the report states.
The full report is available at  www.copenhagendiagnosis.com

“Sea level is rising much faster and Arctic sea ice cover shrinking more rapidly than we previously expected. Unfortunately, the data now show us that we have underesti¬mated the climate crisis in the past."
Professor Stefan Rahmstorf, Professor of Physics of the Oceans and a Department Head at the Potsdam Institute for Climate Impact Research in Germany.

"Carbon dioxide emissions cannot be allowed to continue to rise if humanity intends to limit the risk of unacceptable climate change.  The task is urgent and the turning point must come soon. If we are to avoid more than 2 degrees Celsius warming, which many countries have already accepted as a goal, then emissions need to peak before 2020 and then decline rapidly."
Professor Richard Somerville, Scripps Institution of Oceanography, University of California, San Diego, USA.

"Our available emissions to ensure a reasonably secure climate future are just about used up.  Within just a decade global emissions need to be declining rapidly.  An urgent binding treaty is needed to ensure unilateral action among the high emitters."
Professor Matthew England, ARC Federation Fellow and joint Director of the Climate Change Research Centre of the University of NSW, Australia.

“This is a final scientific call for the climate negotiators from 192 countries who must embark on the climate protection train in Copenhagen. They need to know the stark truth about global warming and the unprecedented risks involved.”
Professor Hans Joachim Schellnhuber, Director of the Potsdam Institute for Climate Impact Research (PIK) and Chair of the German Advisory Council on Global Change (WBGU).

“The adjustment of glaciers to present climate alone is expected to raise sea level by approximately 18 centimeters. Under warming conditions glaciers may contribute as much as more than half a meter by 2100.”
Dr. Georg Kaser, Glaciologist at the University of Innsbruck, Austria

“Warming of the oceans and increased uptake of CO2 is of increasing concern for the marine environment. The loss of biodiversity due to upper ocean warming, ocean acidification and ocean de-oxygenation will add dramatically to the existing threads of overfishing and marine pollution”.
Professor Martin Visbeck, Professor of Physical Oceanography and Deputy Director of IFM-GEOMAR

“The climate system does not provide us with a silver bullet. There is no escape but to start reducing greenhouse gas emissions as soon as possible.”
Professor Nicolas Gruber, Professor for Environmental Physics, ETH Zürich

Title Page of the Copenhagen Diagnosis

Observed (red line) and modeled September Arctic sea ice extent in millions of square kilometers. The solid black line gives the ensemble mean of the 13 IPCC AR4 models while the dashed black lines represent their range. From Stroeve et al. (2007) updated to include data for 2008. The 2009 minimum has recently been calculated at 5.10 million km2, the third lowest year on record, and still well below the IPCC worst case scenario.