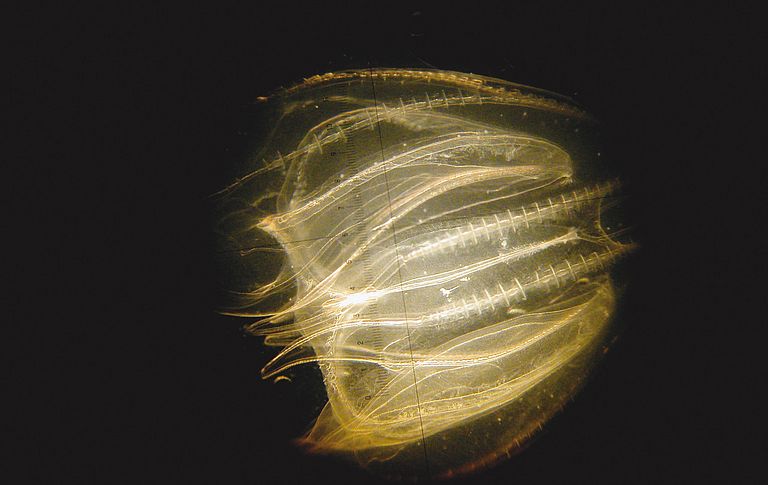 This comb jelly (Mnemiopsis leidyi) is only 1.5 cm in size and was photographed in Kiel Fjord. Photo: Javidpour Jamileh, GEOMAR

27 November 2013/Kiel. The American comb jelly, an only recent immigrant species into the Baltic, is biologically a very simple organism. It is therefore surprising that the immune system of the jellyfish is capable of learning and recognizing their enemies. This is the result of a study that was recently published by scientists at the GEOMAR Helmholtz Centre for Ocean Research Kiel and the Institute for Clinical Molecular Biology at the University of Kiel in the international journal Biology Letters.

This jellyfish, called the sea walnut or - technically correct - Mnemiopsis leidyi, moved into the focus of scientists in Kiel a few years ago when the species, actually native off the North American coast, showed up for the first time in the North Sea and the Baltic. Since the comb jellyfish feeds on fish eggs and larvae among other things, it was feared that any rapid spreading might have negative impacts on the fish stocks in the Baltic Sea region.
This was reason enough to investigate the resilience of the species in more detail. Scientists at GEOMAR Helmholtz Centre for Ocean Research and the Institute for Clinical Molecular Biology at the University of Kiel, under the direction of Prof. Thorsten Reusch (GEOMAR), tried to find out how the immune system of these very simple organisms works that make up the most primitive multicellular animals besides sponges. They found that comb jellyfish can actually recognize their enemies.

"We have sort of “vaccinated” the jellyfish with different bacteria," explained the lead author of the study, Dr. Sören Bolte, who conducted the study as part of his doctoral thesis at GEOMAR. "We were able to show that the expression of immune genes after a second injection of bacteria is affected by the first treatment," said Dr. Bolte. Furthermore, the response of the immune system is different depending on whether it has been injected twice with the same bacteria or twice with different bacteria. This means, Dr. Bolte summarized, that these simple animals feature a so-called "specific immune priming", a vivid immune response that can recognize and remember different bacterial groups. This has also been shown in previous studies of insects by co-author Dr. Olivia Roth, but the result is entirely new in primitive invertebrates such as jellyfish.

"It is amazing what the immune system of such simple organisms can do," says Sören Bolte. A flexible, responsive immune system could help to explain the invasive success of the jellyfish. "Of course, boundary conditions, such as temperature and salinity, must be just right, but the ability to defend themselves against enemies is crucial for a species migrating into a new environment," says Dr. Bolte, who is continuing his research into the immune system of the jellyfish at the Institute of Microbiology of the University of Kiel after completing his doctorate in the Cluster of Excellence "The Future Ocean".

The sea walnut, as the comb jelly Mnemiopsis leidyi is also called, obviously not only has sufficient adaptability but also a flexible, responsive immune system. However, it has not spread in recent years in the Baltic to the extent it was initially feared, and is currently found mainly in the North Sea. For humans, this invader is completely harmless and hardly noticeable due
to its small size (a few centimeters) and nearly full transparency.

Image in higher resolution:
This comb jelly (Mnemiopsis leidyi) is only 1.5 cm in size and was photographed in Kiel Fjord. Photo: Javidpour Jamileh, GEOMAR

This comb jelly (Mnemiopsis leidyi) is only 1.5 cm in size and was photographed in Kiel Fjord. Photo: Javidpour Jamileh, GEOMAR