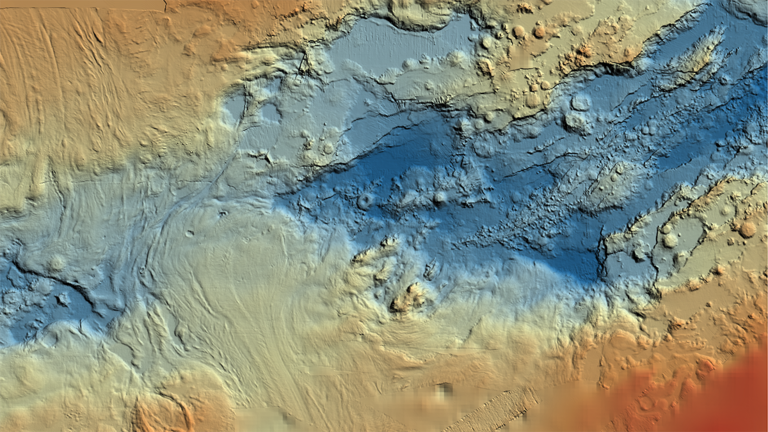 Bathymetric chart of a part of the Red Sea. Source GEOMAR.

3D-Animation of the bathymetry of the Red Sea. Source: GEOMAR.

Red Sea is no longer a Baby Ocean

23 April 2021 / Kiel. The Red Sea not only is one of the most important marine traffic routes of modern world trade. It is also a fascinating and still puzzling area of investigation for geoscientists. Controversial questions include its age and whether it represents a special case in ocean basin formation or if it has evolved similarly to other, larger ocean basins. Researchers from Germany, Saudi Arabia and Iceland have now published a new tectonic model of the Red Sea in the international journal Nature Communications. It suggests that it is not only a typical ocean, but also one that is more mature than thought before.

It is 2,250 kilometers long, but only 355 kilometers wide at its widest point - on a world map, the Red Sea hardly resembles an ocean. But this is deceptive. A new, albeit still narrow, ocean basin is actually forming between Africa and the Arabian Peninsula. Exactly how young it is and whether it can really be compared with other young oceans in Earth's history has been a matter of dispute in the geosciences for decades. The problem is that the newly formed oceanic crust along the narrow, north-south aligned rift is widely buried under a thick blanket of salt and sediments. This complicates direct investigations.

In the international journal Nature Communications, scientists from GEOMAR Helmholtz Centre for Ocean Research Kiel, King Abdullah University for Science and Technology in Thuwal (Saudi Arabia) and the University of Iceland have now published a study that makes a good case for the Red Sea being quite mature and having an almost classical oceanic evolution. “Using a combination of different methods, we can show for the first time that the structures in the Red Sea are typical for a young but already fully developed ocean basin.” says Dr. Nico Augustin from GEOMAR, lead author of the study.

In addition to information from high-resolution seafloor maps and chemical investigations of rock samples, the team primarily used gravity and earthquake data to develop a new tectonic model of the Red Sea basin. Gravity anomalies have already helped to detect hidden seafloor structures such as rift axes, transform faults and deep-sea mountains in other regions, for example in the Gulf of Mexico, the Labrador Sea or the Andaman Sea.

The authors of the current study compared gravity patterns of the Red Sea axis with comparable mid-ocean ridges and found more similarities than differences. For example, they identified positive gravity anomalies running perpendicular to the rift axis, which are caused by variations in crustal thickness running along the axis. “These so-called 'off-axis segmentation trails' are very typical features of oceanic crust originating from magmatically more active, thicker and thus, heavier areas along the axis. However, this observation is new for the Red Sea,” says Dr. Nico Augustin.

Bathymetric maps as well as earthquake data also support the idea of an almost continuous rift valley throughout the Red Sea basin. This is also confirmed by geochemical analyses of rock samples from the few areas that are not overlain by salt masses. “All the samples we have from the Red Sea rift have geochemical fingerprints of normal oceanic crust,” says Dr. Froukje van der Zwan, co-author of the study.

With this new analysis of gravity and earthquake data, the team constrains the onset of ocean expansion in the Red Sea to about 13 million years ago. “That's more than twice the generally accepted age,” Dr. Augustin says. That means the Red Sea is no longer a baby ocean, but a young adult with a structure similar to the young southern Atlantic some 120 million years ago.

The model now presented is, of course, still being debated in the scientific community, says the lead author, “but it is the most straightforward interpretation of what we observe in the Red Sea. Many details in salt- and sediment-covered areas that were previously difficult to explain suddenly make sense with our model.” While it has thus been able to answer some questions about the Red Sea, the model also raises many new ones that inspire further research in the Red Sea from a whole new scientific perspective.

Bathymetric chart of a part of the Red Sea. Source GEOMAR.

3D-Animation of the bathymetry of the Red Sea. Source: GEOMAR.