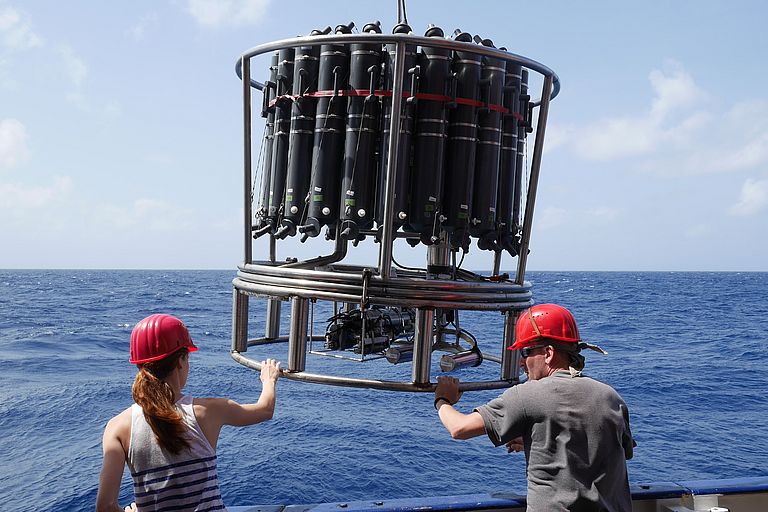 Hydrographic data collected by ship expeditions over the past 30 years show a surprising contrast between changing water properties and stable circulation in the North Atlantic. Photo: Martin Visbeck/GEOMAR

A stable ocean circulation in a changing North Atlantic Ocean

27 November 2020 / Kiel. As a result of climate change, properties of the North Atlantic such as oxygen, temperature or salinity are changing from the surface to great depths. But does this also affect the ocean circulation? Scientists at the South China Sea Institute of Oceanology of the Chinese Academy of Sciences, the Georgia Institute of Technology (USA) and the GEOMAR Helmholtz Centre for Ocean Research Kiel show in a new study that despite profound changes in the internal properties of the ocean, the circulation has remained stable since the 1990s. The results have now been published in the international journal Science Advances.

The Gulf Stream is often described as the long-distance heating system of Europe, since it transports thermal energy across the Atlantic Ocean to the British Isles and the Norwegian Sea. Strictly speaking, however, the Gulf Stream is only part of a larger current system known as the Atlantic Meridional Overturning Circulation (AMOC). It consists primarily of a northward-flowing warm and saline part at the surface, and which includes the Gulf Stream, and a southward-flowing cold and fresh part in the deep North Atlantic.

Measurements in the North Atlantic have been showing significant changes in water properties for years, including warming of the upper ocean, record-breaking freshening of the subpolar North Atlantic and changes in oxygen content. Up to now, scientists have assumed that these changes are closely linked to changes in the AMOC.

Scientists at the South China Sea Institute of Oceanology of the Chinese Academy of Sciences, the Georgia Institute of Technology (USA) and the GEOMAR Helmholtz Centre for Ocean Research in Kiel have now investigated this assumption in a comprehensive data study. “The results indicate that circulation changes and changes in the properties of the ocean interior may occur at a very different pace”, oceanographer Dr. Johannes Karstensen from GEOMAR summarizes the results. They have been published today in the international journal Science Advances.

Assessments on changes of the AMOC over several decades are difficult to make so far. There are arrays of permanently installed ocean observatories at key positions of the circulation. However, their measurement series do not reach far enough back into the past to make robust statements about long-term changes. There are, however, individual data sets of the circulation and the vertical structure of the ocean, which were recorded by research vessels during Atlantic crossings. “These ship-based data provide us with a unique opportunity to study hydrographic and AMOC changes in the North Atlantic simultaneously over the last three decades,” explains Dr. Karstensen. Hydrographic surveys measure seawater properties such as temperature and salinity as well as dissolved oxygen.

For the current study, the authors team used data from research expeditions in the subtropical and subpolar North Atlantic together with satellite data, basin-wide monitoring array observations and model data. They found that not only the water masses from the surface to about 2000 meters water depth have experienced significant variations in temperature, salinity and dissolved oxygen over the period of the study, but also that the water at greater depth has shown significant salinization, signs of warming and, for the most part, a decrease in oxygen over the past decades. However, no changes in AMOC status in both the subpolar and subtropical North Atlantic between the 1990s and 2010s have been observed. “Apparently, water properties and circulation changes with different pace,” says Dr. Karstensen.

In addition to the actual results, the study emphasizes the need for continuous and combined hydrographic data collection over entire ocean basins, long-term ocean observation with measuring networks and the improvement of models, the Kiel oceanographer emphasizes: “This is the only way we can comprehensively record the relationships between hydrographic and circulation changes in the future. We are particularly grateful to the global GO-SHIP program, which makes the data collected by research vessels publicly available in a comprehensible quality and for all interested parties”.

Hydrographic data collected by ship expeditions over the past 30 years show a surprising contrast between changing water properties and stable circulation in the North Atlantic. Photo: Martin Visbeck/GEOMAR