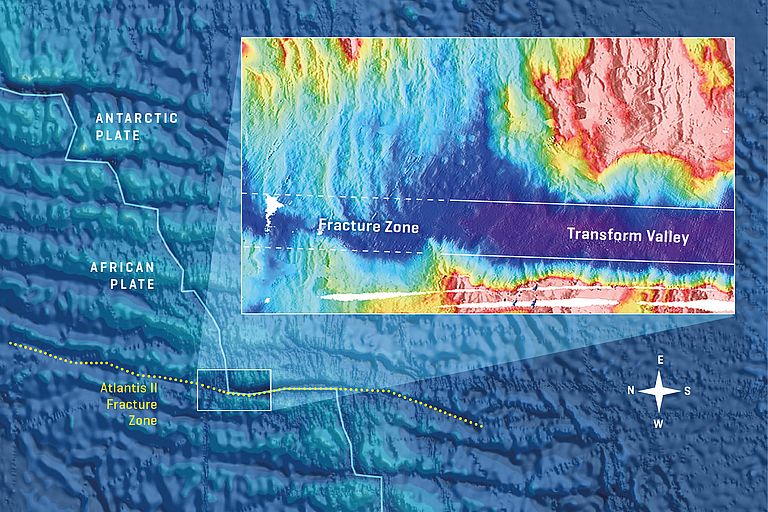 The Atlantis II fracture zone in the southwestern Indian Ocean with a zoom on the northern corner. The greater water depth in the transform valley is clearly visible. As the plates move, magmatism in the corners refills the deep transform valleys so that the adjacent fracture zones are shallower. Graphic: Christoph Kersten/GEOMAR according to Grevemeyer et al., 2021

A new view on plate tectonics

17 March 2021 / Kiel. Along submarine mountain ranges, the mid-ocean ridges, forces from the Earth's interior push tectonic plates apart, forming new ocean floor and thus moving continents about. However, many features of the processes summarised under the term plate tectonics are still unclear. Among other issues, there are simply not enough precise maps of the ocean floors. Researchers at GEOMAR Helmholtz Centre for Ocean Research Kiel today have published a study in the international journal Nature that assigns transform faults which offset mid-ocean ridges a completely new role in plate tectonics.

Forces acting inside the Earth have been constantly reshaping the continents and ocean basins over millions of years. What Alfred Wegener published as an idea in 1915 has finally been accepted since the 1960s, providing a unifying view about our planet. The fact that the theory of plate tectonics took so long to gain acceptance had two simple reasons. First, the geological formations that are most important for its understanding lie at the bottom of the oceans. Secondly, forces controlling the processes act below the seafloor and are hence hidden from our view. Many details of plate tectonics are therefore still unclear today.

Today, five scientists from GEOMAR Helmholtz Centre for Ocean Research Kiel, the Southern University of Science and Technology (Shenzhen, China) and GeoModelling Solutions GmbH (Switzerland) publish a study in the international scientific journal Nature that questions a previous basic assumption of plate tectonics. It is about so-called transform faults. “These are large offsets in the mid-ocean ridges. So far, they have been assigned a purely passive role within plate tectonics. However, our analyses show that they are definitely actively involved in shaping the ocean floors,” explains Prof. Ingo Grevemeyer from GEOMAR, lead author of the study.

A look at a global overview map of the ocean floors helps to understand the study. Even at low resolution, several tens of thousands of kilometres long mid-ocean ridges can be recognised on such maps. They mark the boundaries of the Earth's plates. In between, hot material from the Earth's interior reaches the surface, cools down, forms new ocean floor and pushes the older ocean floor apart. “This is the engine that keeps the plates moving,” explains Prof. Grevemeyer.

However, the mid-ocean ridges do not form unbroken lines. They are cut by transverse valleys at almost regular intervals. The individual segments of the ridges each begin or end in an offset at these incisions. “These are the transform faults. Because the Earth is a sphere, plate movements repeatedly cause faults that produce these ridge offsets,” explains Prof. Lars Rüpke from GEOMAR, co-author of the study.

Earthquakes can occur at the transform faults and they leave long scars, so-called fracture zones, on oceanic plates. Until now, however, research assumed that the two plates only slide past each other at transform faults, but that seafloor is neither formed nor destroyed in the process.

The authors of the current study have now looked at available maps of 40 transform faults in all ocean basins. “In all examples, we could see that the transform valleys are significantly deeper than the adjacent fractures zones, which were previously thought to be simple continuations of the transform valleys,” says co-author Prof. Colin Devey from GEOMAR. The team also detected traces of extensive magmatism at the outer corners of the intersections between transform valleys and the mid-ocean ridges.

Using sophisticated numerical models, the team found an explanation for the phenomenon. According to this, the plate boundary along the transform fault is increasingly tilted at depth, so that shearing occurs. This causes extension of the seafloor, forming the deep transform valleys. Magmatism at the outer corners to the mid-ocean ridges then fills up the valleys, so that the fracture zones become much shallower. Oceanic crust that forms at the corners is therefore the only crust in the ocean that is formed by two-stage volcanism. What effects this has on its composition or, for example, the distribution of metals in the crust is still unknown.

Since transform faults are a fundamental type of plate boundary and frequent phenomenon along active plate boundaries in the oceans, this new finding is an important addition to the theory of plate tectonics and thus to understanding our planet. “Actually, the observation was obvious. But there are simply not enough high-resolution maps of the seafloor yet, so no one has noticed it until now,” says Prof. Grevemeyer.

The Atlantis II fracture zone in the southwestern Indian Ocean with a zoom on the northern corner. The greater water depth in the transform valley is clearly visible. As the plates move, magmatism in the corners refills the deep transform valleys so that the adjacent fracture zones are shallower. Graphic: Christoph Kersten/GEOMAR according to Grevemeyer et al., 2021