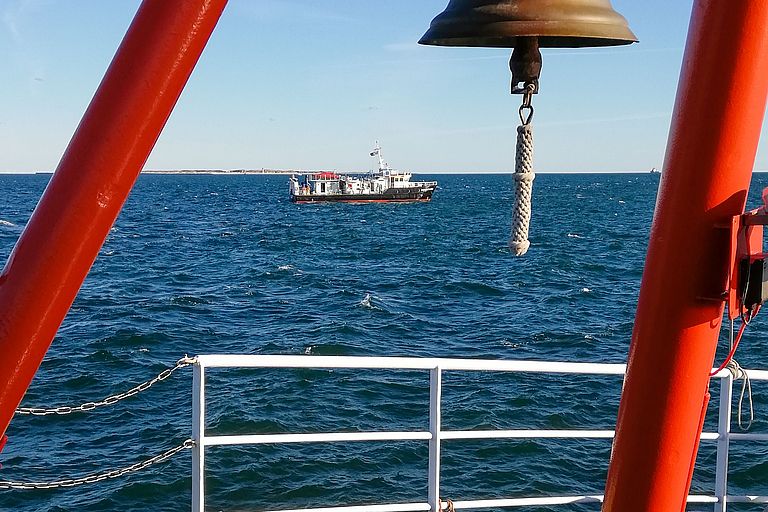 Joint measurements of the AWI, HZG and GEOMAR for the Helmholtz project MOSES

As a result of climate change, heavy rainfall with flooding is increasing in Central Europe, as are summer heat waves and droughts. In the MOSES research initiative, scientists from the Helmholtz Association are investigating how these extreme hydro-meteorological events will change our earth and environment in the long term. The GEOMAR Helmholtz Centre for Ocean Research Kiel is also participating in the measurements: This week, the research vessel LITTORINA will sail the German Bight together with ships from the Alfred Wegner Institute Helmholtz Centre for Polar and Marine Research (AWI) and the Helmholtz Centre Geesthacht (HZG) and perform measurements. The rally marks the end of the "Elbe 2020" test campaign, which was launched on August 4 under the leadership of the Center for Environmental Research (UFZ) and which will run from the Czech border to the North Sea.

The three coastal research vessels of the Alfred Wegener Institute, GEOMAR and HZG will take over the third and last part of the measurement campaign. They will sample the North Sea coastal area and follow the whereabouts of the Elbe discharge plume between the East Frisian islands via Helgoland to Sylt and Föhr on a large scale. The LITTORINA will mainly sample the area between Cuxhaven, Helgoland and Büsum. The focus will be on estimating the input of organic carbon and algae biomass as well as the greenhouse gas methane from the river into the sea. Each of the ships will be equipped with a special antenna. This will enable the exchange of data and measurements between the ships and between them and the mainland over long distances in real time. At least two of the ships will also meet daily to take samples at the same location. The comparison of these measured values ensures that the sensors are correctly calibrated.

The plan is to test the entire chain of effects of extreme hydro-meteorological events - from the river catchment areas of the Müglitz in the Erzgebirge and the Bode in the Harz mountains, to their discharge into the Elbe, along the Elbe and its mouth in the North Sea. This is because both heavy rainfall and insufficient precipitation not only have regional consequences, but also have a supraregional effect on rivers, soils, groundwater and the coastal area. Researching these consequences is the goal of the Helmholtz scientists working together under the umbrella of the MOSES research initiative. "To do this, we need specially adapted and coordinated sensor and measurement systems and logistics and organization that are sophisticated down to the last detail. Test campaigns such as "Elbe 2020" are important to train for joint deployment," emphasizes MOSES project manager Dr. Ute Weber.

The first part of the measurement campaign between Schmilka on the Czech border and the Geesthacht weir shortly before Hamburg was carried out by the UFZ. The Helmholtz Centre Geesthacht for Materials and Coastal Research continued the measurement campaign between August 24 and 28 between Geesthacht and Cuxhaven on the tidal influenced section of the Elbe. AWI and GEOMAR will now join the project and sample the German Bight in the third section with the HZG.

MOSES stands for "Modular Observation Solutions for Earth Systems". In this initiative coordinated by the UFZ, nine research centers of the Helmholtz Association are jointly building mobile and modular observing systems between 2017 and 2022 to study the effects of temporally and spatially limited dynamic events, such as extreme precipitation and runoff events, on the long-term development of earth and environmental systems.