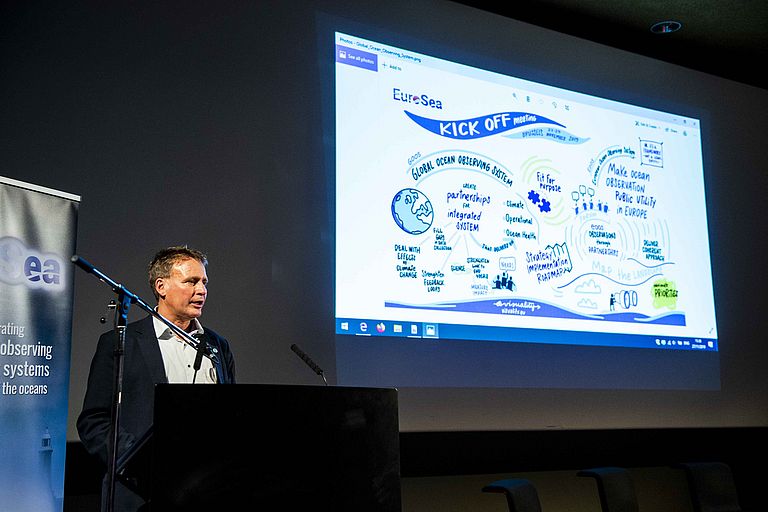 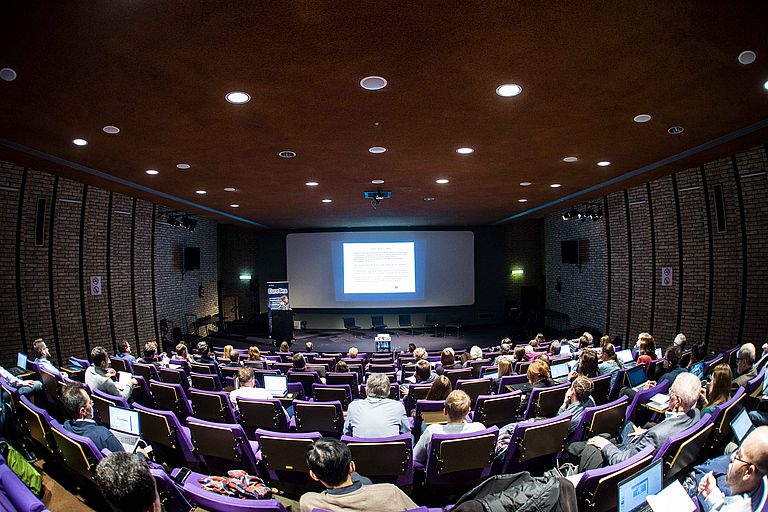 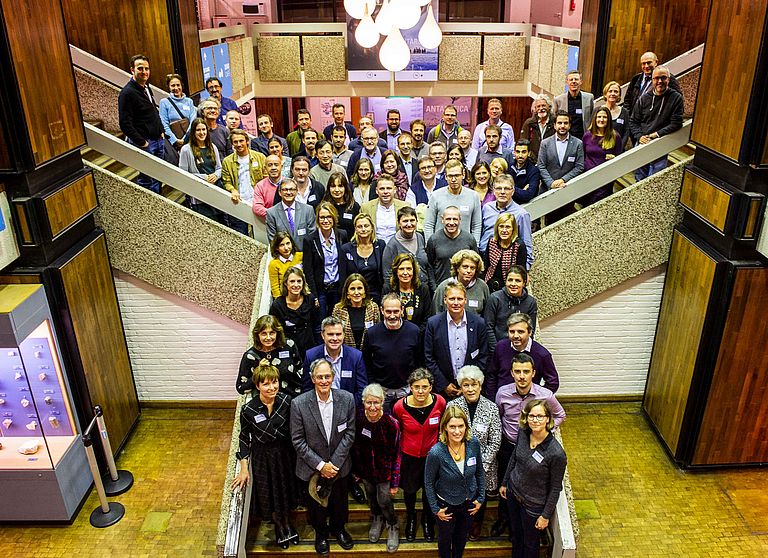 The participants of the meeting in Brussels. Photo: Michael Chia.

EuroSea: Gathering more Knowledge for a sustainable Use of the Ocean

28 November 2019 / Kiel, Brussels. Europe with its long coastlines, many peninsulas, marginal seas, gulfs and bays is closely interlocked with the ocean. In times of sea-level rise and global warming, it is important to know exactly what processes take place around the coast and in the ocean. However, there are still major gaps in ocean observing. An international consortium of 55 partners organized through the EuroSea project is set to change this. EU funding of 12.6 million Euros will enable this major collaboration effort. The project, coordinated at the GEOMAR Helmholtz Centre for Ocean Research Kiel, will kick off in Brussels this week.

The oceans provide us with food and oxygen. They are trade routes and climate buffers. They serve as places for recreation, but often also as waste dumps. Storms, rising sea levels, tidal waves and pollution threaten people and ecosystems along the coasts. This is particularly true of Europe with its vast populated coastlines, marginal seas, gulfs and bays.

Yet, despite the immense importance of the oceans, there are still major gaps in our knowledge of the ocean interior, due to missing or insufficiently linked ocean observations. Such knowledge gaps make it difficult to assess the present ocean status, as well as predict how best to plan for future developments for a sustainable use of the oceans.

Through the EuroSea project, an international consortium of 55 partners has now joined forces with the aim to significantly improve ocean observation in Europe and beyond. The European Union is funding the project with a total of 12.6 million euros until 2023. Kicking off the project, 80 researchers and guests from politics and industry will meet at the opening conference at the Royal Belgium Institute for Natural Science (RBINS) in Brussels.

"The aim of the project is to better combine existing capacities in the European marine observing system, to fill existing gaps and to make the resulting data and information available to users more easily," says coordinator Dr.Toste Tanhua from the GEOMAR Helmholtz Centre for Ocean Research Kiel.

The EuroSea consortium partners are scientific institutions, and non-public partners from 13 European countries, Brazil and Canada. In addition, intergovernmental organisations and networks, such as the World Meteorological Organization (WMO), the Intergovernmental Oceanographic Commission of UNESCO (IOC-UNESCO), the European Marine Board and the European part of the Global Ocean Observing System (EuroGOOS) are supporting the project. Furthermore, partners from industry, for example those involved in the development of ocean observing technologies and services beyond the project are contributing.

Besides improving in-situ ocean measurements, EuroSea focuses on the quality and usability of collective data, and on systems using the data for operational forecast services. "To this end, we are working closely with existing marine databases and data infrastructures and the EU BlueCloud project to improve capabilities in these areas and facilitate efficient data exchange," stresses the project coordinator. The ocean data should comply with the FAIR standard (findable, accessible, interoperable, reusable). "Unfortunately, this is not always the case" says Dr. Tanhua.

The project builds on its predecessor AtlantOS which aims to establish an integrated Atlantic Ocean observing system to improve ocean observations for the entire Atlantic region. EuroSea will continue this project’s work by focusing on the European seas, including the Mediterranean Sea, and its neighbours.

GEOMAR is not only responsible for the overall coordination of EuroSea but is intensively involved in six of the ten work packages. These range from better linking of existing observing networks and data integration to research into the role of the ocean in climate change and the assessment of the economic importance of the oceanic carbon pump. Almost 1.8 million euros of the total funding will go to the Helmholtz Centre in Kiel.

"We want to pave the way for a sustained ocean observing system that not only provides researchers, but also users such as fisheries, aquaculture, coastal protection, offshore energy generation and ultimately the public with the information they need and demand. In doing so, we are also contributing to the United Nations' sustainable development goals, the UN Decade for Ocean Science for Sustainable Development, and the G7 Initiative Future of the Seas and Oceans," Dr. Tanhua summarizes.

Please note:
EuroSea is funded by the European Union in the framework of The Future of Seas and Oceans Flagship Initiative, under the grant agreement 862626.

Deployment of an oceanographic mooring in the Atlantic Ocean. Data from such long-term observations help to better estimate current and future developments in the ocean. But there are still gaps in ocean observation. Photo: Mario Müller/GEOMAR (CC BY 4.0)

The participants of the meeting in Brussels. Photo: Michael Chia

The participants of the meeting in Brussels. Photo: Michael Chia.