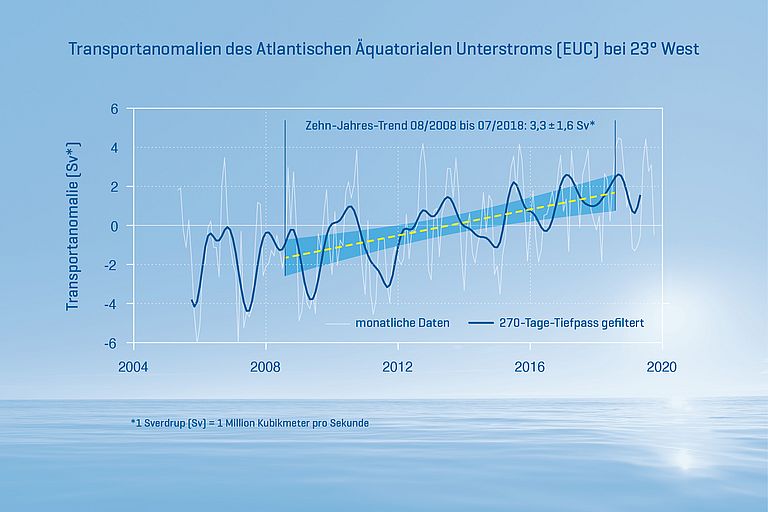 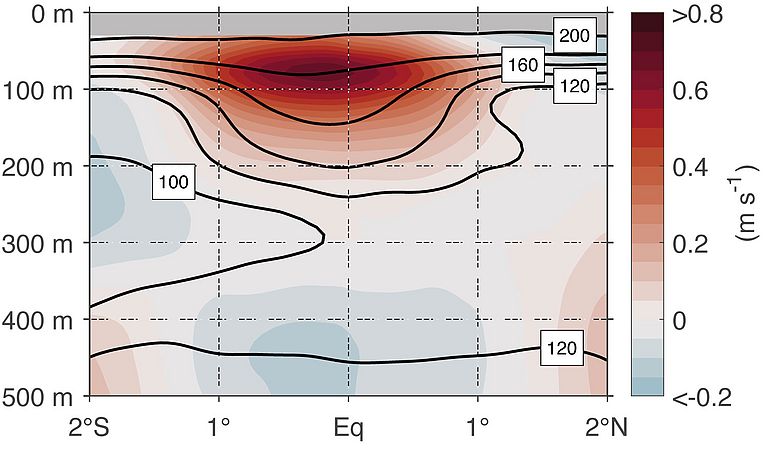 The Atlantic Equatorial Undercurrent (EUC) at 23°W. Mean current velocity (colours in m/s) and oxygen distribution (contour lines in μmol/kg). The dark red colours mark the core of the EUC at about 80 m depth. After Brandt et. al, 2021. 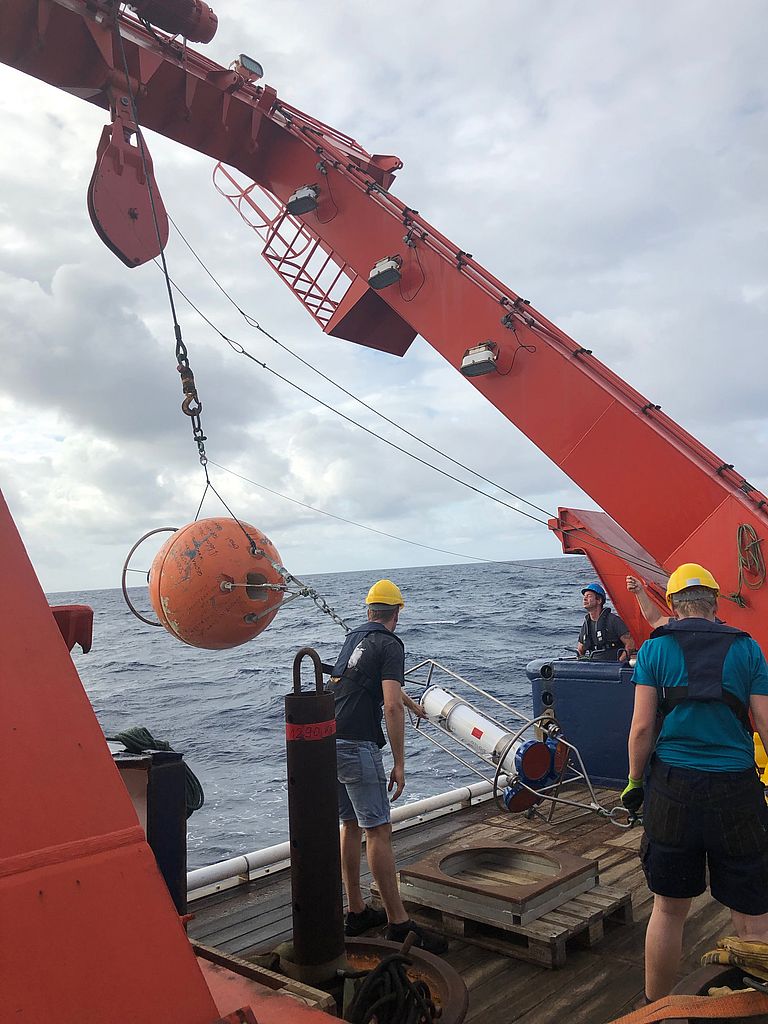 Launch of a mooring in the tropical Atlantic. Photo: P. Brandt, GEOMAR.

Fluctuations in ocean currents modulate oxygen content at the equator

19 April 2021/Kiel. In large areas of the world's oceans, the oxygen content is decreasing, globally by about 2% in the last 60 years. Critical regions are in particular the tropical oceans due to their oxygen minimum zones. A German-French study led by GEOMAR Helmholtz Centre for Ocean Research Kiel has used long-term observations to investigate the complex interplay between fluctuations in the equatorial current system and variations in oxygen content. The results have now been published in the international journal Nature Geoscience.

Due to global warming, not only the temperatures in the atmosphere and in the ocean are rising, but also winds and ocean currents as well as the oxygen distribution in the ocean are changing. For example, the oxygen content in the ocean has decreased globally by about 2% in the last 60 years, in particular in the tropical oceans. However, in these regions complex and strongly fluctuating ocean currents also exist. At the equator, one of the strongest currents, the Equatorial Undercurrent (EUC), transports water masses eastwards across the Atlantic. For many years, scientists at GEOMAR have been investigating fluctuations of this current with fixed observation platforms, so-called moorings, in cooperation with the international PIRATA programme. Based on the data obtained from these moorings, they were able to prove that the EUC has strengthened by more than 20% between 2008-2018. The strengthening of this ocean current is also associated with increasing oxygen concentrations in the equatorial Atlantic and an increase in the oxygen-rich layer near the surface. This also means an extension of the habitat for tropical pelagic fish. The results of the study have now been published in the international journal Nature Geoscience.

“At first, this statement sounds encouraging, but it does not describe the entire complexity of the system”, says project leader and first author Prof. Dr. Peter Brandt from GEOMAR. “We found that the strengthening of the Equatorial Undercurrent is mainly caused by a strengthening of the trade winds in the western tropical North Atlantic”, Peter Brandt explains. The analysis of a 60-year data set has shown that the recent oxygen increase in the upper equatorial Atlantic is associated with a multidecadal variability characterised by low oxygen concentrations in the 1990s and early 2000s and high concentrations in the 1960s and 1970s. “In this respect, our results do not contradict the global trend, but show the need for long-term observations in order to be able to separate natural fluctuations of the climate system from trends such as oxygen depletion caused by climate warming”, says Brandt.

The changes in oxygen supply in the tropics that occur due to circulation fluctuations also have an impact on marine ecosystems and ultimately on fisheries in these regions. “Changes in tropical fish habitat size can lead to altered predator-prey relationships, but also make it particularly difficult to assess overfishing of economically relevant fish species, such as tuna”, says Dr Rainer Kiko, co-author from the Laboratoire d'Océanographie de Villefranche at Sorbonne University, Paris.

The investigations are based partly on a ship expedition carried out along the equator at the end of 2019 with the German research vessel METEOR. This expedition included a physical, chemical, biochemical and biological measurement programme that supports the development of climate-based predictions for marine ecosystems as part of the EU-funded TRIATLAS project. While another expedition with RV METEOR along the equator had to be cancelled due to the COVID-19 pandemic, several long-term moorings in the tropical Atlantic - including the one at the equator - will now be recovered and redeployed during an additional expedition with RV SONNE in June-August 2021, of course under strict quarantine conditions.

The Atlantic Equatorial Undercurrent (EUC) at 23°W. Mean current velocity (colours in m/s) and oxygen distribution (contour lines in μmol/kg). The dark red colours mark the core of the EUC at about 80 m depth. After Brandt et. al, 2021.

Launch of a mooring in the tropical Atlantic. Photo: P. Brandt, GEOMAR.