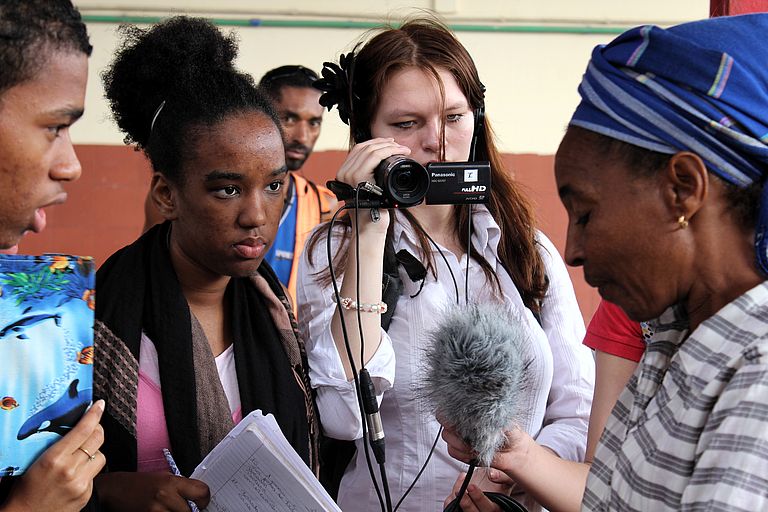 Pupils from the Cape Verde Islands and from Germany conducting video interviews with Cape Verdian fishermen and customers at the fish market. The insights thus gained into the changing catch in fisheries and dietary habits will be compared with interviews from Germany later on. Photo: S. Soria-Dengg, GEOMAR

From the Baltic to the Tropical Atlantic

28.12.2011/Kiel, Mindelo. Shortly before Christmas, three pupils from Heikendorf near Kiel, Germany travelled to Cape Verde to study the ecosystem of the tropical Atlantic. The trip was part of the school projects of the GEOMAR | Helmholtz Centre for Ocean Research Kiel, Germany and the National Institute for Fisheries of the Republic of Cape Verde (INDP).

Sunshine, 31 degrees above and 25 degrees in the water– this is how winter can also feel like. At least in Mindelo bay on the islands of Cape Verde where the pupils Rike (14), Ann-Kathrin (15) and Gunda (16) from Heinrich-Heine High School in Heikendorf near Kiel, Germany, measured nutrient content and other environmental variables of the Tropical Atlantic to compare them later with those of the Baltic Sea at home. The research excursion of the three pupils and their teachers was part of a joint project by their school and the GEOMAR | Helmholtz Centre for Ocean Research (until 31 Dec 2011: Leibniz Institute of Marine Sciences IFM-GEOMAR) in Kiel together with the high school “Escola Salesiana“ in Mindelo as well as the National Institute for Fisheries of the Republic of Cape Verde (INDP). “One of the goals of this cooperation is to demonstrate to our pupils that the real world exposed them to much bigger challenges than they experienced from their school classes so far,” explains Wilfried Wentorf, a chemistry teacher from Heikendorf. Dr. Sally Soria-Dengg from GEOMAR adds: “In the morning, the pupils had to take physical measurements together with our African colleagues who only speak English, and in the afternoon the pupils visited their Cape Verdian fellow students in chemistry classes taught in Portuguese. For this, they not only need knowledge but also a talent for improvisation!”

In the framework of their school cooperation in marine sciences, German and Cape Verdian pupils work in parallel on several topics that allow a comparison of such different oceans as the Baltic and the Tropical Atlantic. Among those one is “waste in the water”. For this, both in Cape Verde and in simultaneous experiments in the Baltic, empty plastic bottles and soda cans are placed in the ocean for a few months. The pupils investigate which organisms will colonise them in what order. In addition, they address the topic of fisheries. Rike, Ann-Kathrin and Gunda conducted video interviews with Cape Verdian fishermen and customers at the fish market. “This required all available language skills and a lot of wild gestures as well“, recollects Dr. Soria-Dengg. The insights thus gained into the changing catch in fisheries and dietary habits will be compared with interviews from Germany later on. “The Germans were quite surprised that we eat moray eels”, so Hélio (15) who participates in this project as a Cape Verdian host pupil, “but then they told us that they eat smoked freshwater eel in Germany. Not a big difference, really, is it?”

The two marine research institutions GEOMAR and INDP have already been closely cooperating for many years. Meanwhile, this collaboration has been extended to schools thanks to the financial support by the German Research Foundation (DFG) and the Susanne and Dr. Klaus Reger Foundation. In the classes of two “grade 9” courses and an after-school science activity of Heinrich-Heine School, the marine science topics are? to be investigated with the partners in Cape Verde were first elaborated with support by experts of GEOMAR. In the second step, the three pupils had the chance to experience ”live” how science works. “We want to demonstrate to the young people that marine research is not possible without international cooperation”, Dr. Soria-Dengg explains, and Wilfried Wentorf adds: “For this, in addition to factual knowledge a command of foreign languages is required, as well as social competence, flexibility and creativity.” In spite of initial difficulties in communication German and Cape Verdian pupils got along superbly with each other within a very short time. They demonstrated this on the last day of their visit when they jointly presented their first results to 200 pupils and teachers of the Cape Verdian partner school in two languages and with great success.

The results of their study on the “Tropical Atlantic” ecosystem are soon to be presented on the web together with the data obtained from the Baltic to allow a comparison also for other pupils.

Just in time for the Christmas celebrations the pupils and their supervisors got back to Kiel. And yet, they all agree: “Right after the vacations we'll continue our measurements in the Baltic!” This time, however, with wool hats and winter boots instead of sun glasses and flip-flops.

Pupils from the Cape Verde Islands and from Germany conducting video interviews with Cape Verdian fishermen and customers at the fish market. The insights thus gained into the changing catch in fisheries and dietary habits will be compared with interviews from Germany later on. Photo: S. Soria-Dengg, GEOMAR