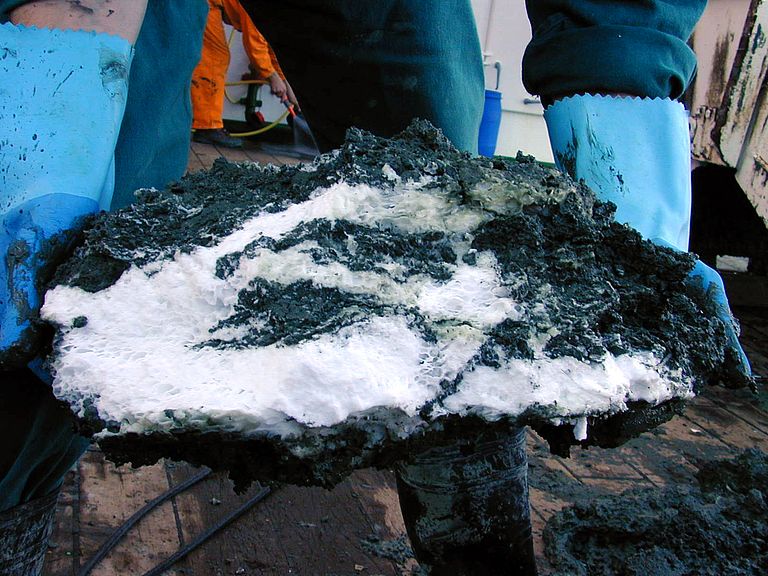 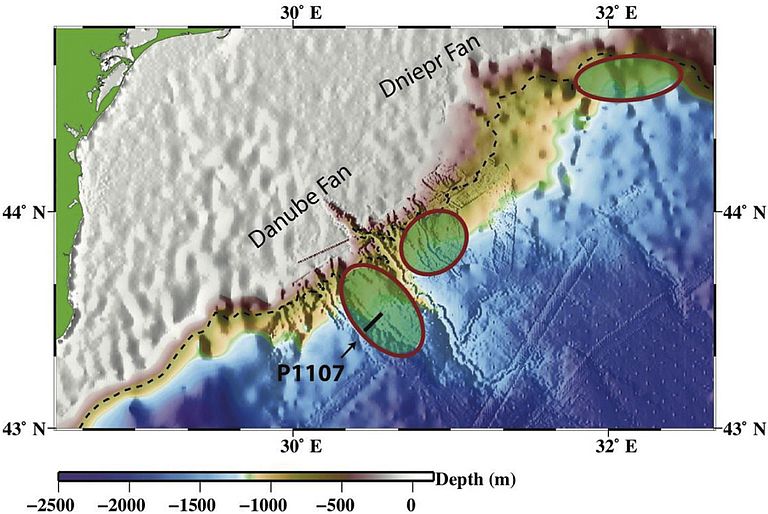 Largest occurrences in the Black Sea and the European Arctic Ocean

21 November 2019/Kiel. Natural gas, stored in so-called gas hydrates, can be found on many continental margins worldwide. As part of the MIGRATE (Marine Gas Hydrates: An Indigenous Resource of Natural Gas for Europe) project funded by the European Commission, an inventory of deposits in European waters has now been compiled for the first time. First results of the study which was coordinated by GEOMAR Helmholtz Centre for Ocean Research Kiel were now published in the international journal Marine and Petroleum Geology.

End of the 1990s gas hydrates became widely known under the term “burning ice”. The combination of water and methane, which occurs under high pressure and at low temperatures as an ice-like solid structure in marine sediments, is a fossil energy source that could cover the increasing demand for natural gas in the coming decades. This might be on the short-term the only way to substitute coal as an energy supplier within the framework of the “energy turnaround”, as long as renewable energies cannot completely cover the energy demand. Worldwide, large projects are currently investigating gas volumes and the feasibility of exploiting gas hydrate deposits.

In the MIGRATE (Marine Gas Hydrates: An Indigenous Resource of Natural Gas for Europe) project, funded by the European Commission, for the first time a Europe-wide inventory of hydrate deposits, the workflows required to exploit them and the technologies available have been assessed. MIGRATE brings together scientists, technicians and engineers from all over Europe in one network project and enables an overview and consolidation of individual research studies in a Europe-wide consortium. As a result, an overview of gas hydrate deposits in Europe and guidelines for the exploration and production of gas hydrates are now available for the first time.

The study “Hydrate occurrence in Europe: A review of available evidence” published in the international journal Marine and Petroleum Geologyprovides for the first time an overview of gas hydrate deposits from Norway to Spain and in the Black Sea. Scientists from the GEOMAR Helmholtz Centre for Ocean Research Kiel have conducted extensive interdisciplinary studies in the Black Sea in the area of the Danube fan, providing estimates of gas hydrate distribution and volume.

“Our studies on hydrate occurrences throughout Europe have shown that there are direct or indirect indications of the presence of hydrate at several European sites, including on the western and eastern margins of Greenland, on the coast and off the coast of Spitsbergen, in the Barents Sea, on the central Norwegian continental margin, on the continental margin west of Ireland, in the eastern Mediterranean Sea, in the Marmara Sea and near the western and southern margins of the Black Sea”, explains Dr. Jörg Bialas from GEOMAR, co-author of the study. “Hydrates are particularly widespread off the coast of Spitsbergen and Norway as well as in the Black Sea”, Bialas continues.

However, according to the geophysicist from Kiel, the hydrate systems have only been well investigated in a few small areas. In order to determine the regional hydrate content under the seafloor, extensive further investigations are required for most European regions.

For a possible gas extraction from a hydrate deposit, stability calculations are also necessary to show the areas where a safe extraction is possible. “In the Black Sea region, we have carried out extensive three-dimensional seismic surveys”, explains Bialas. The data obtained in these studies will help to identify areas in which a safe degradation of gas hydrates could be possible. As part of the national SUGAR project, a method was also developed to safely store carbon dioxide during natural gas production in a hydrate deposit. This method, developed at GEOMAR, would support not only the possibility of CO2 storage but also the slope stability of hydrate-rich sediment layers.

“Even though final figures for available gas volumes in the hydrate regions cannot yet be given, the report and maps have enabled us to achieve an unusually broad-based interdisciplinary cooperation that will facilitate the development of such cross-border work in future”, Dr. Bialas summarizes.