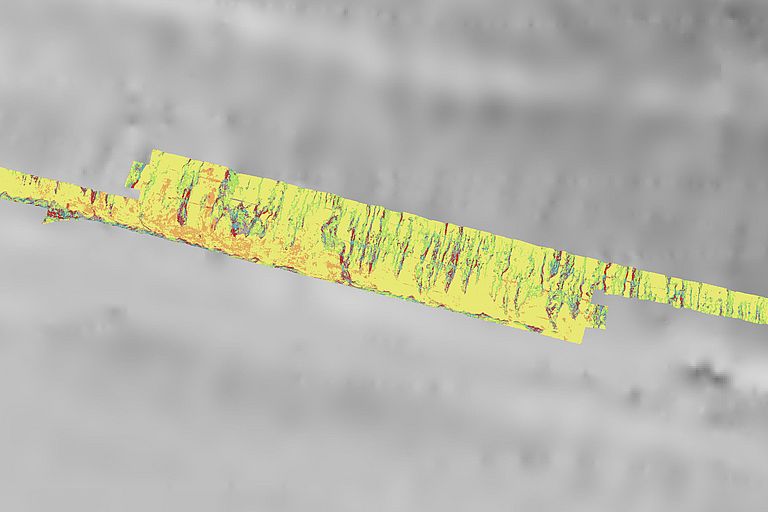 By means of hydroacoustic seafloor mapping Senckenberg and GEOMAR researchers have found out that the seafloor in the Atlantic Ocean is much more diverse than previously assumed. Photo: Senckenberg 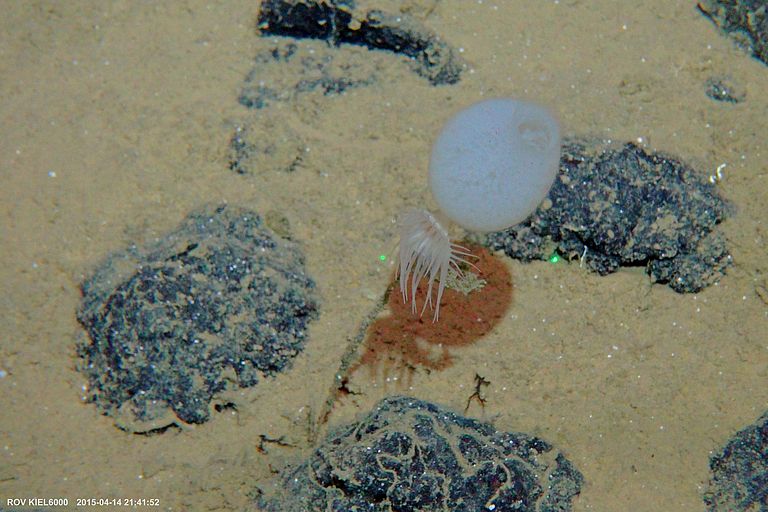 Many deep-sea sponges, such as this specimen of the genus Hyalonema, firm, solid surface for attachment. This photograph of the GEOMAR ROV Kiel6000 from a manganese nodule area in the Pacific illustrates the importance of hard substrates for deep-sea fauna. Photo: ROV-Team/GEOMAR

"Hard Rock" in the deep sea

19 June 2020/Frankfurt, Kiel. By means of hydroacoustic seafloor mapping Senckenberg and GEOMAR researchers have found out that the seafloor in the Atlantic Ocean is much more diverse than previously assumed. Up to now, biologists have assumed mostly monotonous sediment plains in the abyssal deep sea. In their study published today in the scientific journal "PNAS", the scientists now show that a patchwork of rocky habitats and other hard substrates is to be expected in the Atlantic, which in some regions of this depth zone can make up 30 percent of the seabed. The diversity of habitats is expected to have direct impact on the local wildlife.

The deep sea is known for its unexplored and surprisingly large biodiversity — despite the extreme environmental conditions, it is home to countless organisms that have adapted in many different ways: from Giant Squid and Pelican Eels to blue-green shining Brittle Stars. "This diversity, which we encounter on every expedition, seems to contradict the assumption that the habitat of these animals supposedly is quite uniform," explains Dr. Torben Riehl from the Senckenberg Research Institute and Nature Museum in Frankfurt, and continues: "We asked ourselves: Why can so many species coexist in such a homogeneous habitat and even evolve in the first place? Is the abyssal sea floor perhaps less monotonous than assumed?"

Together with the head of the Senckenberg department "Marine Zoology" Prof. Dr. Angelika Brandt and deep-sea researchers of the GEOMAR Helmholtz Centre for Ocean Research Kiel, Riehl has closely examined the area around a submarine fracture zone during an expedition with the research vessel Sonne in 2015. Geologists refer to valleys in the - in this case - oceanic crust as fracture zones, which run across the mid-ocean ridges and extend over hundreds of kilometers. The scientists have mapped and analyzed the seafloor of the tropical North Atlantic at a depth of about 4,500 to 5,500 meters over an area of 94,000 square kilometers.

"That sounds a lot, but compared to the huge area of the Atlantic Ocean it is only a tiny section. So far, less than 20 percent of the world's sea beds have been directly mapped. The new maps we produced in the Atlantic Ocean clearly showed that such a survey is urgently needed because it contributes to the overall understanding of an ocean - from geology to oceanography to ecology", emphasizes Dr. Anne-Cathrin Wölfl from GEOMAR, co-author of the study.

"Our hydroacoustic data allow us to distinguish between rocky and sedimentary seabed and transition areas. Sampling and videos have shown that the applied method actually works at this depth.

The mapped area was scattered with rocky habitats. Thus we can say that the seafloor in this depth zone is much more heterogeneous than commonly assumed. These hard substrates have simply been overlooked so far," says Riehl and continues: "Most maps of the sea floor at these depths usually only have a resolution in the kilometer range - it's like trying to read the fine print without glasses as a farsighted person; only very blurred contours are visible. If one now takes our newly created maps of the seabed for comparison, it is as if one puts on the reading glasses. The newly created maps have a resolution of 60 meters and are, compared to former maps, pin sharp. You can see details that up to now you could only guess at best. In addition to the seabed model, we were able to make further statements about the seabed from the data collected."

But how could the stony habitats remain unnoticed despite numerous deep-sea expeditions since the 1950s? In its study, the team around the deep-sea researcher from Frankfurt suspects that this is due to the fact that research has so far only been spot-checked and also to the research equipment itself: sledges, trawls, drilling rigs and the like were mainly developed for use on relatively flat and above all soft sediments. "Sampling the deep-sea fauna is technically highly demanding. If the cartographic basis, as inaccurate as it may be, suggests the possibility of an uneven topography on the sea floor, the use of equipment at this location is usually reconsidered. If the equipment is lost or damaged during use, this could endanger the expedition. However, this practice leads to a distortion of our picture of the deep sea," adds Riehl.

The team has extrapolated its results to the entire Atlantic Ocean and thus estimated the total area of available hard substrates. Riehl explains: "Depending on the age of the crust, hard substrate makes up to 30 per cent of the seabed. All in all, we have an area of over 260,000 square kilometers for which we can assume rocky seabed. Since hard substrate is an important habitat for numerous deep-sea organisms and influences the distribution of species, this is extremely important information for reinterpreting biodiversity in the abyssal and better understanding its origins and composition!".

The method used combines information on the topography and roughness of the seafloor, which is obtained using a multibeam echo sounder. "To our knowledge, this is the first time that it has been applied in this way at abyssal depths, making it possible to distinguish between habitat types and quantify this habitat diversity. It can thus be used for the exploration of the seabed, for example in connection with the establishment of protected areas in the deep sea," Riehl gives an outlook.

By means of hydroacoustic seafloor mapping Senckenberg and GEOMAR researchers have found out that the seafloor in the Atlantic Ocean is much more diverse than previously assumed. Photo: Senckenberg

Many deep-sea sponges, such as this specimen of the genus Hyalonema, firm, solid surface for attachment. This photograph of the GEOMAR ROV Kiel6000 from a manganese nodule area in the Pacific illustrates the importance of hard substrates for deep-sea fauna. Photo: ROV-Team/GEOMAR