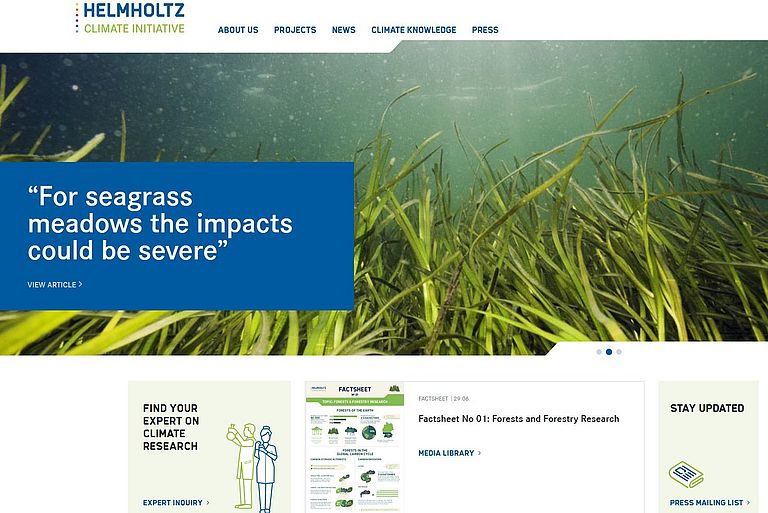 Articles, background knowledge, fact sheets, and much more on the current state of climate research

9 July 2020/Berlin. Starting today, the Helmholtz Climate Initiative presents itself from a new perspective. The Initiative’s website www.helmholtz-klima.de has been intensely reworked and expanded with many new features. For example, it now offers an expert directory that visitors can use to request the expertise of climate scientists in the Helmholtz Association. A new climate calendar shows upcoming climate-related dates. A media library offers a comprehensive selection of materials such as fact sheets, visuals, photos and videos. This offers current, scientifically validated climate knowledge to the interested public and media creators as well as to decision makers in politics and business. The site is now more user-friendly thanks to a new streamlined design.

Up-to-date articles on the new website reveal the current state of scientific research on climate-related topics such as droughts, forest decline or changing disease profiles. To start, Munich physician Claudia Traidl-Hoffmann and geographer Daniela Bayr show how they are jointly researching the effects of climate change on our health, such as how allergies are changing due to increased global warming and how affected individuals can react.

In the Helmholtz Climate Initiative, since July 2019 scientists from 15 Helmholtz centers work as an interdisciplinary team to find systemic solutions to one of the greatest social problems of our time: climate change. The Initiative consists of 13 pilot projects assigned to two scientific areas of focus: Cluster I, “Net Zero 2050” (Mitigation), is working on a pilot roadmap that compiles the most promising contributions from the scientific community towards making Germany CO2-neutral by 2050. Cluster II “Adapting to Extreme Events” (Adaptation), is investigating possible ways of adapting to climate-related changes in areas of life such as health, agriculture, energy supply and traffic.

The specially created Communication Cluster is not only intended as a forum for presenting the findings of the project. The aim is also to summarize the current state of research on climate-related topics and to initiate an active dialog with interested persons. To achieve this goal, the Helmholtz Climate Initiative is networking with other climate research projects within the Helmholtz Association as well as with numerous other partners. For example, fact sheets, articles and background papers are developed together with the German coordination center of the IPCC global climate council, the German Climate Consortium and klimafakten.de.

Further details on the individual pilot projects and areas of focus of the Helmholtz Climate Initiative can be found at: www.helmholtz-klima.de Starting now, journalists can register here for the new press directory.