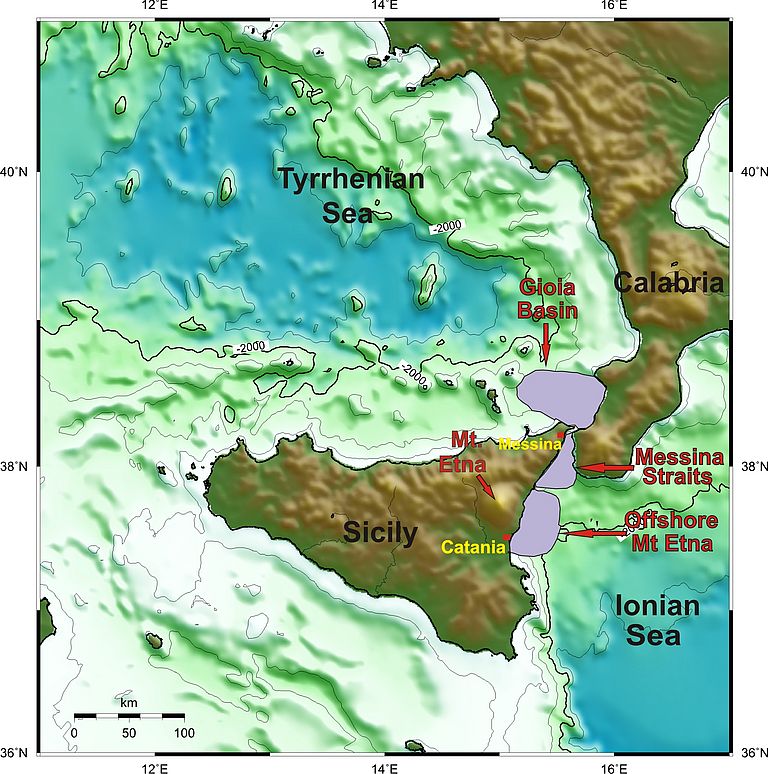 the research area of the expedition. picture: S. Krastel, GEOMAR

How do Tsunamis off the coast of South Italy develop?

19.12.2011/Kiel. From late December 2011 till Mid January 2012 earth scientists from the Leibniz Institute of Marine Sciences (IFM-GEOMAR) and from the Cluster of Excellence „The Future Ocean“ in Kiel, Germany will examine the causes of earthquakes and tsunamis along the continental margins of the Mediterranean Sea off the coast of South Italy. The enhanced understanding of those processes is supposed to help to better estimate the risks of those natural hazards in the future.

On the 28th of December 1908 the earth in Italy trembled. Shortly afterwards a Tsunami wave overhauled the Southern Coast of Italy. Over 80,000 people died in the region around the seaport town Messina. However the earthquake in Messina is only one of many examples for natural hazards occurring in this region regularly. According to estimations around 10 percent of the tsunamis worldwide occur in the Mediterranean Sea. The continental margins of the Mediterranean Sea off the coast of Southern Italy are situated along tectonic plates which move towards each other. This results in frequent volcanic eruptions and earth quakes. It is, however, still unclear, whether the tsunami of 1908 was triggered by a sudden vertical movement along a major fault during the earthquake or as a result of a giant marine slide initiated by the earthquake. “To better understand the causes of those catastrophes we aim to examine the region thoroughly and collect data on seismic activities and the structure of the sediment in the area”, Prof. Dr. Sebastian Krastel from the Leibniz Institute of Marine Sciences (IFM-GEOMAR) outlines the goals of an expedition with the German research vessel METEOR. The expedition takes place in the region from late December 2011 till Mid January 2012. Prof. Dr. Krastel is also head of the research group “submarine hazards “of the Cluster of Excellence “The Future Ocean”.

During the expedition the scientists are investigating the sea floor in three major regions: The Strait of Messina, the area off the coast of Sicilia and the Gioia Basin. To do so the scientists use a seismic-system developed by the IFM-GEOMAR. The system is able to create 3D images of the structures beneath the seafloor. Additionally gravity corers will be used to obtain sediment cores. Using the collected data the main objectives will be to map and characterize volcanic and non-volcanic submarine slides and to identify fractured rocks, which are often accompanied by earthquakes. The work done by Prof. Dr. Krastel and his team is supported by Italian cooperation partners who for example provided topographic information on the sea floor in this region, which have been collected in the so-called MAGIC-project (MArine Geohazards Along the Italian Coasts). This information was decisive for the selection of the three research areas.

“The impression that natural hazards such as tsunamis are only occurring at the other end of the world is commonly created. However there is a tremendous hazard potential in Europe which we have to gain more knowledge about. After all 160 million people live along the Mediterranean Coast and every year 140 million people visit this area for their holidays”, the geoscientist from Kiel emphasizes.

the research area of the expedition. picture: S. Krastel, GEOMAR