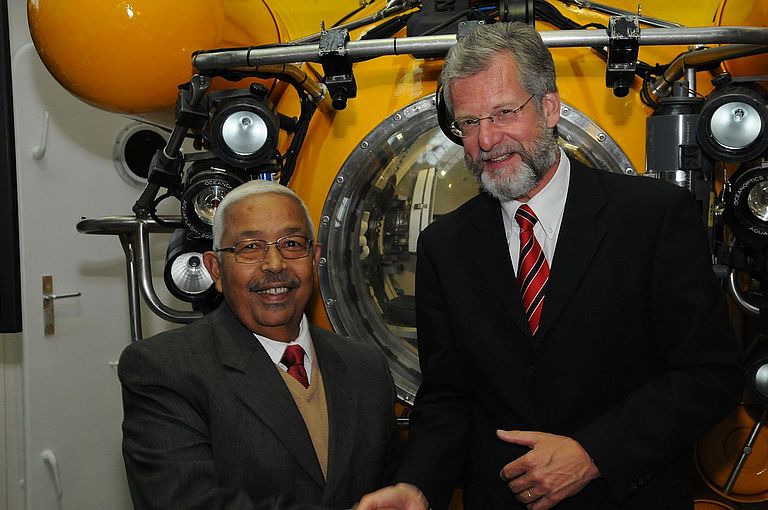 His Excellency Pedro Verona Rodrigues Pires, president of the Republic of Cape Verde, and Prof. Dr. Peter Herzig, Director of IFM-GEOMAR, in front of the submersible JAGO. Photo: Jan Steffen 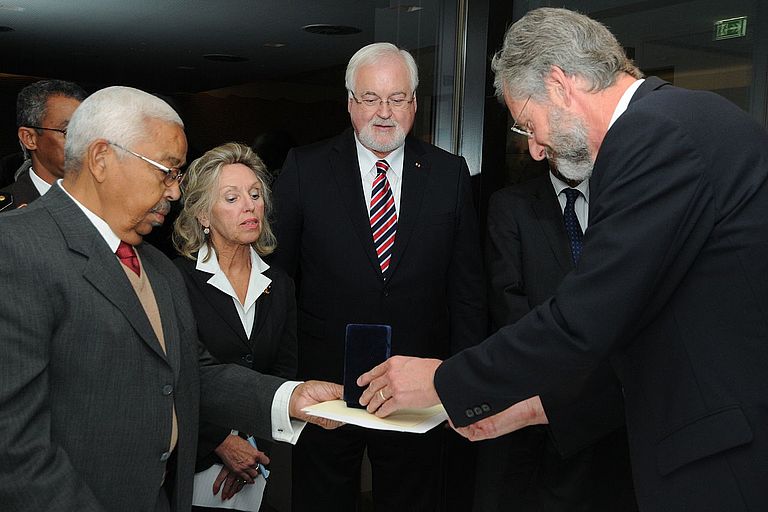 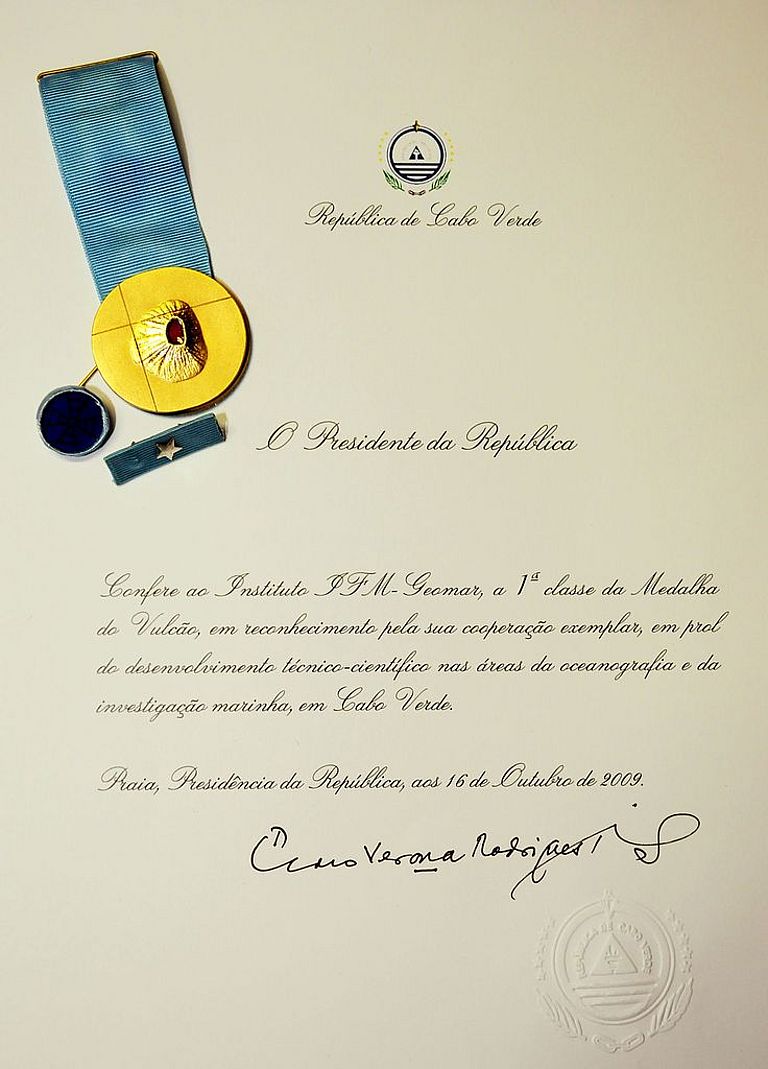 16. October 2009/Kiel, Germany. For the first time, the President of the Republic of Cape Verde is making an official visit to Germany.  In addition to an official welcoming by the Federal President in Berlin, a visit to Kiel and the Leibniz Institute of Marine Sciences (IFM-GEOMAR) is on his programme. Today (16.10) in Kiel his Excellency Pedro Verona Rodrigues Pires was informed about the activities of IFM-GEOMAR in the eastern subtropical Atlantic. The Cape Verde Islands have been an important operational base for marine researchers from Kiel for several years. In recognition of the strong cooperation with Cape Verdean scientists, President Pires has awarded the "Vulcano Medal" to IFM-GEOMAR. It is the highest award of this West African island nation.

"The award is a great honor for all our employees ", emphasizes Professor Herzig, director of IFM-GEOMAR, "It also shows the high value that this cooperation has for both sides." The region of the eastern tropical and subtropical Atlantic in the area of the Cape Verde Islands is regarded as one of the key oceanic regions with regard to the effects of global change. It is therefore of special importance for numerous research activities of IFM-GEOMAR. There scientists can observe changes in the ocean circulation or the oxygen supply to already oxygen-deficient areas of the ocean. On the other hand, the huge dust inputs from the Sahara, with its fertilization effect, have a high importance for marine microorganisms and the fixation of CO2 in the ocean. "Until now, only a very few measurements have been carried out there for logistical reasons, despite the scientific importance of the region" explained Douglas Wallace, Professor for Marine Chemistry at IFM-GEOMAR and leader of the German Research Foundation’s Collaborative Research Centre “Climate- Biogeochemistry Interactions in the Tropical Ocean”.

Such complex scientific questions require a regional engagement over long time periods. With the Instituto Nacional de Desenvolvimento das Pescas (INDP) in Mindelo IFM-GEOMAR has found a reliable partner. "We entered into a formal cooperation agreement with the INDP last year and through this we support the marine research of Cape Verde, including education and scientific infrastructure", explains Prof. Herzig, “The visit of President Pires, and this award, encourages us in the hope that we can further intensify the cooperation". In the long term to make the Cape Verde Islands even more interesting as an operational base a further development of infrastructure is necessary, according to Professor Herzig, "I am optimistic, that together we will find possibilities to advance ".

Examples of existing research projects working in the region, include the already mentioned Collaborative Research Centre of the DFG (www.sfb754.de), the EU project TENATSO (www.tenatso.com), the network project OCEANET (Autonomous measuring platforms for the regulation of substances and energy exchange between ocean and atmosphere) of the Leibniz Association, and the project SOPRAN (Surface Ocean Processes in the Anthropocene) (http://sopran.pangaea.de/) supprted by the Federal Ministry of Education and Research (Bundesministerium für Bildung und Forschung, BMBF).

His Excellency Pedro Verona Rodrigues Pires, president of the Republic of Cape Verde, and Prof. Dr. Peter Herzig, Director of IFM-GEOMAR, in front of the submersible JAGO. Photo: Jan Steffen