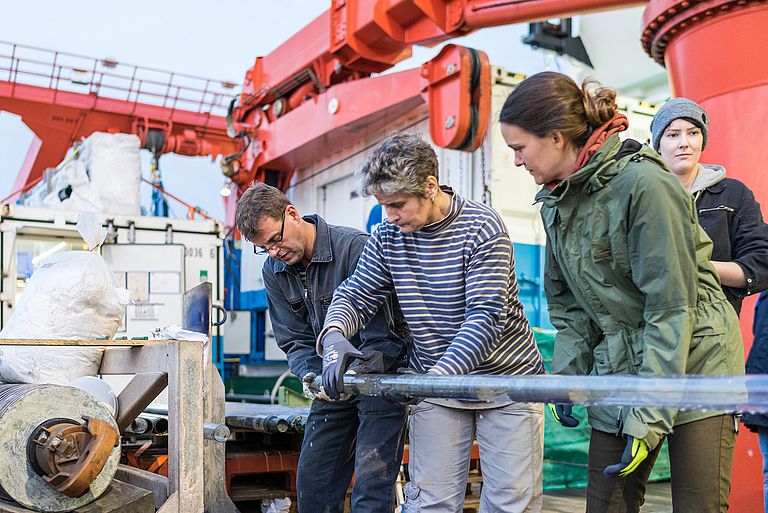 Drill cores from the MARUM-Mebo200 are recovered on deck of the RV METEOR. Photo: Christian Rohleder. 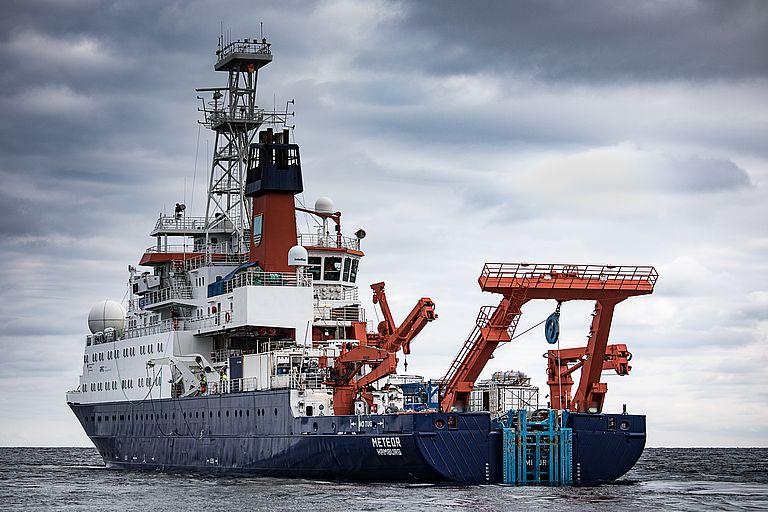 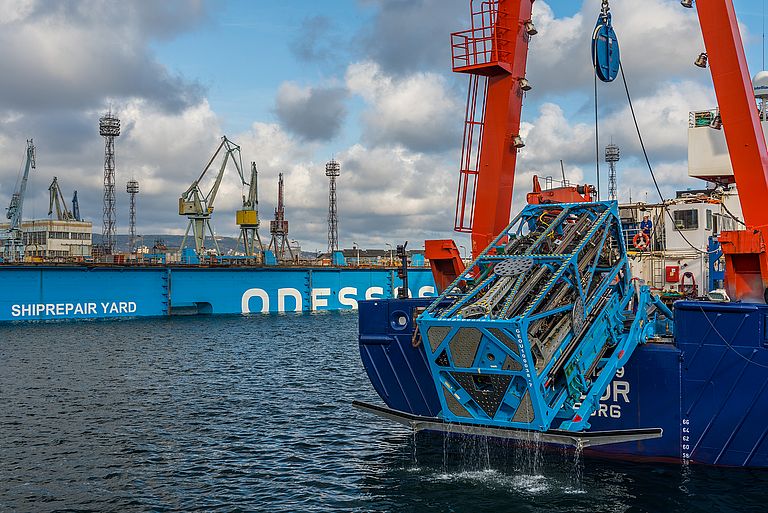 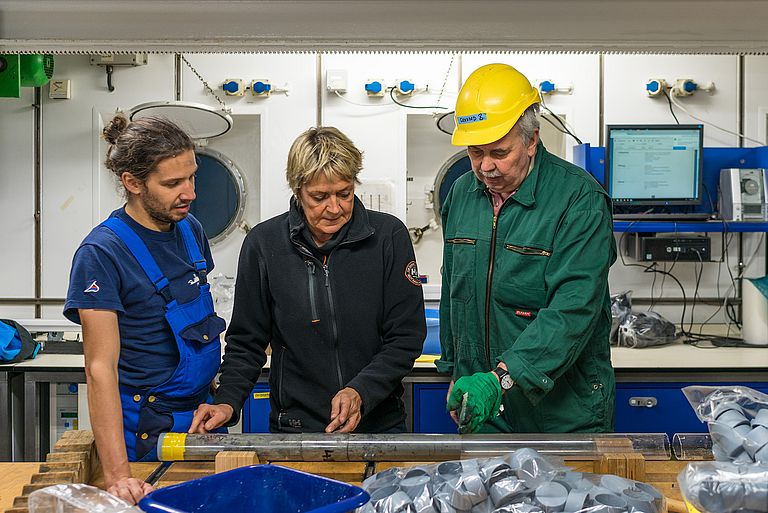 Examination of drill cores in the laboratory of RV METEOR. Photo: Christian Rohleder.

In the deep sea, the last ice age is not yet over

30 March 2021/Kiel/Bremen. While investigating gas hydrate deposits in the western Black Sea, a team of scientists from GEOMAR Helmholtz Centre for Ocean Research Kiel and MARUM - Center for Marine Environmental Sciences at the University of Bremen made surprising discoveries. Contrary to previous findings and theories, the scientists found free methane gas in layers where it should actually not appear. In the study now published in the international journal Earth and Planetary Science Letters, they conclude that the gas hydrate system in the deep-sea fan of the Danube continues to adapt due to climate changes since the last glacial maximum.

Gas hydrates are a solid compound of gases and water that have an ice-like structure at low temperatures and high pressures. Compounds of methane and water, so-called methane hydrates, are found especially at many ocean margins - also in the Black Sea. In addition to a possible use as an energy source, methane hydrate deposits are being investigated for their stability, as they can dissolve with changes in temperature and pressure. In addition to releases of methane, this can also have an impact on submarine slope stability.

During a six-week expedition with the German research vessel METEOR in autumn 2017, a team from MARUM and GEOMAR investigated a methane hydrate deposit in the deep-sea fan of the Danube in the western Black Sea. During the cruise, which was part of the joint project SUGAR III “Submarine Gas Hydrate Resources” jointly funded by the BMWi and BMBF, the gas hydrate deposits were drilled using the mobile seafloor drilling device MARUM-MeBo200. The results of the investigations, which have now been published in the international journal Earth and Planetary Science Letters, have provided the scientists with new insights into changes in the stability of gas hydrates.

“Based on data from previous expeditions, we selected two working areas where, on the one hand, methane hydrate and free methane gas coexist in the upper 50 to 150 metres of the hydrate stability zone and, on the other hand, a landslide and gas seeps were found directly at the edge of the gas hydrate stability zone”, explains Prof. Dr. Gerhard Bohrmann, expedition leader from MARUM and co-author of the study. “For our investigations we used our drilling device MARUM-MeBo200 and broke all previous depth records with a maximum depth reached of almost 145 metres”.

In addition to obtaining samples, the scientists were, for the first time, also able to carry out detailed in situ temperature measurements down to the base of the gas hydrate stability under the seabed. Previously, this baseline was determined using seismic methods, from which the so-called “bottom simulating reflector” (BSR) was obtained as an indicator of this base. “However, our work has now proven for the first time that the approach using the BSR does not work for the Black Sea”, explains Dr. Michael Riedel from GEOMAR, lead author of the study. “From our point of view, the gas-hydrate stability boundary has already approached the warmer conditions in the subsurface, but the free methane gas, which is always found at this lower edge, has not yet managed to rise with it”, Riedel continues. The reasons for this could be attributed to the low permeability of the sediments, which means the methane gas is still “stuck” down there and can only rise very, very slowly under its own power, according to the scientist.

“However, our new analyses of the seismic data have also shown that in a few places the methane gas can break through the BSR. There, a new BSR is just establishing itself over the 'old' reflector. This is new and has never been seen before”, says Dr Matthias Haeckel, co-author of the study from GEOMAR. “Our interpretation is that the gas can rise in these places, as disturbances in the seabed here favour the flow of gas”, Haeckel continues.

“In summary, we have found a very dynamic situation in this region, which also appears to be related with the development of the Black Sea since the last ice age”, says Michael Riedel. After the last glacial maximum (LGM), the sea level rose (pressure increase), and when the global sea level rose above the threshold of the Bosporus, salty water from the Mediterranean Sea was able to propagate into the Black Sea. Before that, this ocean basin was basically a freshwater lake. In addition, global warming since the LGM has caused a temperature rise of the bottom water in the Black Sea. The combination of these three factors - salinity, pressure and temperature - had drastic effects on the methane hydrates, which decompose as a result of these effects. The current study exemplifies the complex feedbacks and time scales that induce climate changes in the marine environment and is therefore well suited to estimate the expected consequences of today's more rapid global warming - especially on the Arctic gas hydrate deposits.

Cruise leader Gerhard Bohrmann summarizes: “At the end of the SUGAR-3 programme, the drilling campaign with MeBo200 in the Black Sea showed us once again very clearly how quickly the methane hydrate stability in the ocean deposits also changes with environmental fluctuations”.

Drill cores from the MARUM-Mebo200 are recovered on deck of the RV METEOR. Photo: Christian Rohleder.

Examination of drill cores in the laboratory of RV METEOR. Photo: Christian Rohleder.