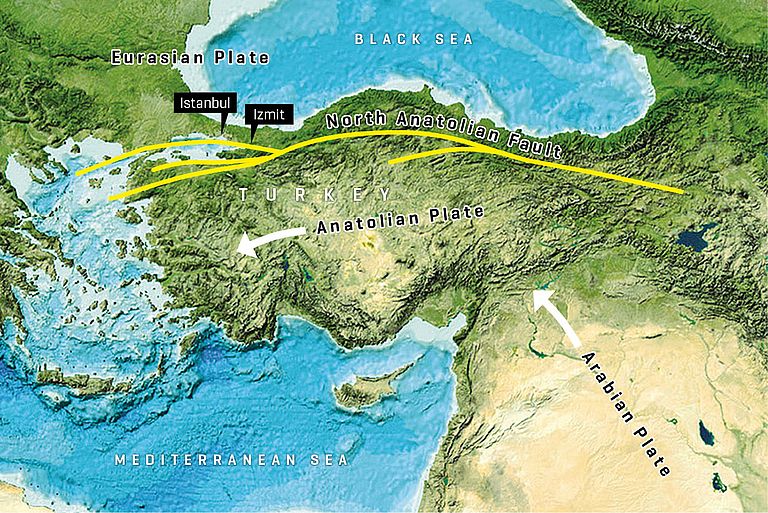 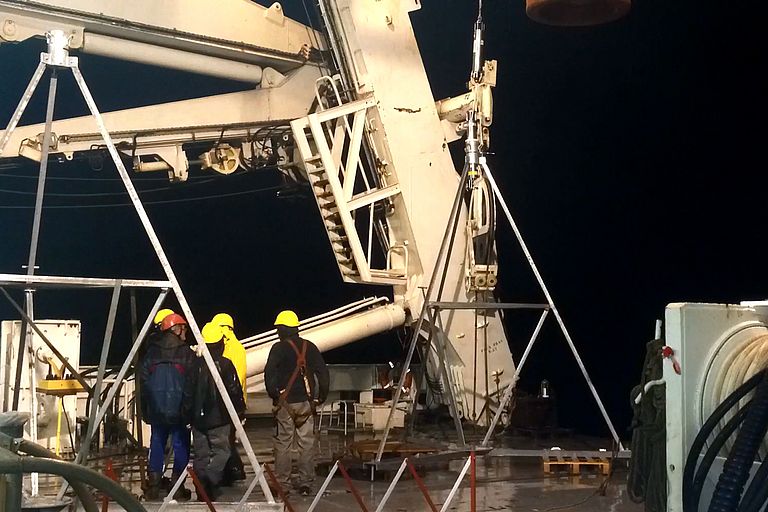 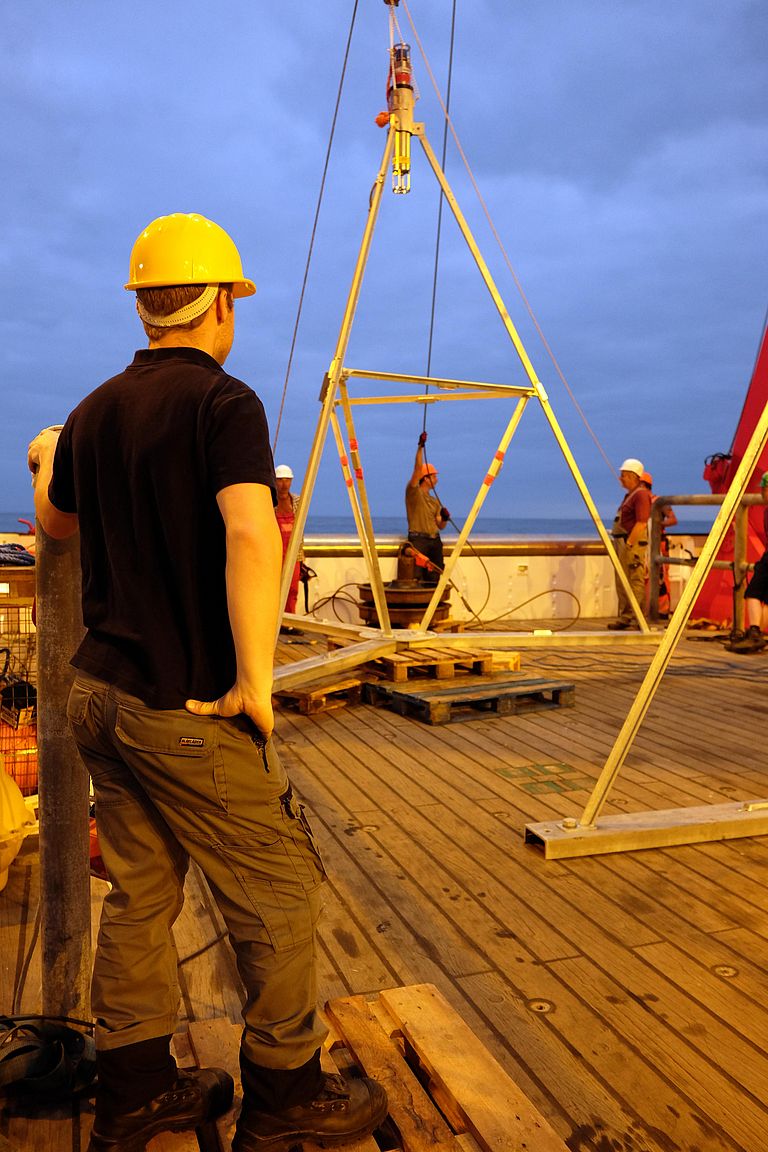 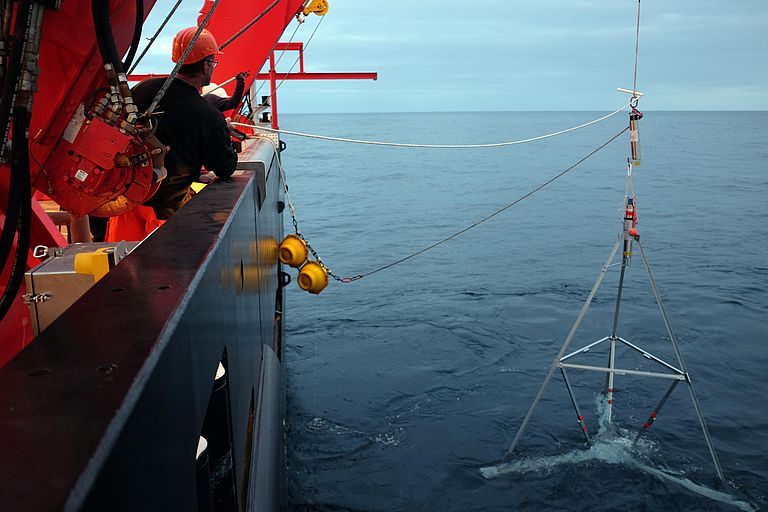 08 July 2019 / Kiel. Istanbul with its more than 15 million inhabitants is located in close proximity to the North Anatolian fault, a boundary between two major tectonic plates. Fre-quently devastating earthquakes occur along the fault. But the fault section off the coast of Istanbul has so far only been observed indirectly because the fault lies below water in the Sea of Marmara. Using an autonomous measuring system on the seafloor, researchers of the GEOMAR Helmholtz Centre for Ocean Research Kiel, together with colleagues from France and Turkey, have now for the first time measured deformation underwater and de-tected a considerable build-up of tectonic strain below the Marmara Sea. The study appears today in the international journal Nature Communications.

Collapsed houses, destroyed port facilities and thousands of victims — on 22 May 1766 an earthquake of approximately 7.5 magnitude units and a subsequent water surge triggered a catastrophe in Istanbul. The origin of the quake was located along the North Anatolian fault in the Sea of Marmara. It was the last major earthquake to hit the metropolis on the Bosporus.

Researchers of the GEOMAR Helmholtz Centre for Ocean Research Kiel (Germany), together with colleagues from France and Turkey, have now been able to demonstrate for the first time with direct measurements on the seafloor that considerable tectonic strain has built up again on the North Anatolian fault below the Sea of Marmara. "It would be sufficient to trigger another earthquake with magnitudes between 7.1 to 7.4," says geophysicist Dr. Dietrich Lange of GEOMAR. He is the lead author of the study published today in the international journal Nature Communications.

Tectonic strain build-up along fault zones on land has been regularly monitored for years using GPS or land surveying methods. This is not possible in seabed fault zones due to the low penetration depth of the GPS satellite signals under water. However, the section of the North Anatolian fault that poses the considerable threat to the Istanbul metropolitan region is located underwater in the Marmara Sea.

Up to now, it has only been possible to extrapolate, for example using land observations, whether the plate boundaries there are moving or locked. However, the methods could not distinguish between a creeping movement and the complete locking of the tectonic plates. The new GeoSEA system developed at GEOMAR measuring acoustic distances on the seabed now enables scientists for the first time to directly measure crustal deformation with mm-precision. Over a period of two and a half years, a total of ten measuring instruments were installed at a water depth of 800 metres on both sides of the fault. During this time, they carried out more than 650,000 distance measurements.

"In order to get measurements accurate within a few millimetres over several hundred of metres, very precise knowledge of the speed of sound underwater is required. Therefore, pressure and temperature fluctuations of the water must also be measured very precisely over the entire period," explains Prof. Dr. Heidrun Kopp, GeoSEA project manager and co-author of the current study.

"Our measurements show that the fault zone in the Marmara Sea is locked and therefore tectonic strain is building up. This is the first direct proof of the strain build-up on the seabed south of Istanbul", emphasizes Dr. Lange.

"If the accumulated strain is released during an earthquake, the fault zone would move by more than four metres. This corresponds to an earthquake with a magnitude between 7.1 and 7.4," adds Professor Kopp. Such an event would very probably have similar far-reaching consequences for nearby Istanbul as the 1999 earthquake for Izmit with over 17,000 casualties.

Images:
Along the North Anatolian Fault, Anatolia and the Eurasian Earth Plate push past each other. Image reproduced from the GEBCO world map 2014, www.gebco.net
In 2014, German and French scientists set down their measuring instruments in the Sea of Marmara. Photo: Dietrich Lange / GEOMAR
GeoSEA tripods are used worldwide. Here they are released off the Chilean coast. Photo: Jan Steffen / GEOMAR
A tripod is launched off Chile. Photo: Jan Steffen