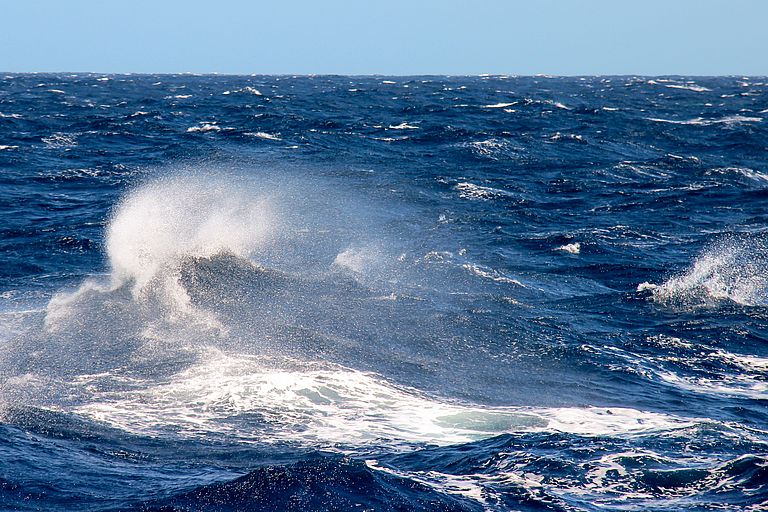 Variations in the water temperature of the North Atlantic provide starting points for multi-year climate predictions, as they also influence the climate in Europe. Photo: Arne Körtzinger/GEOMAR 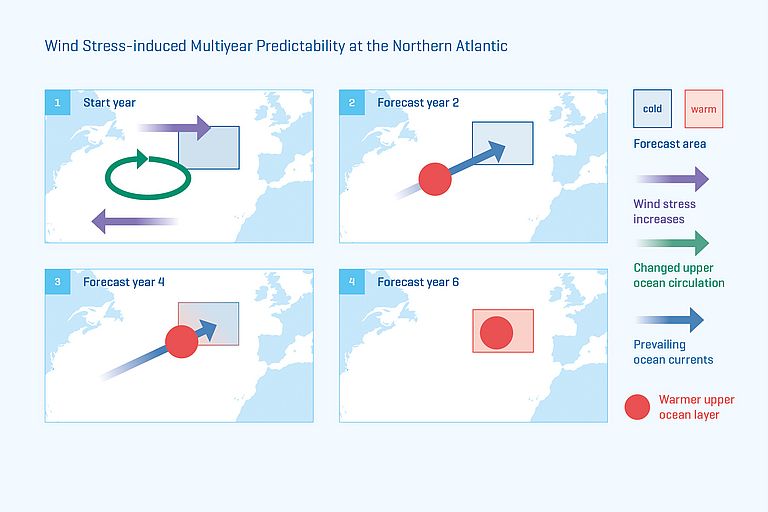 Wind field variations can be used to predict changes in sea surface temperature in the Atlantic Ocean over a period of years. Graphic: Annika Reintges, edited by Christoph Kersten/GEOMAR

A study from Kiel reveals potential and mechanisms

22 July 2020 / Kiel. In five years, will the winter be mild, and will the following summer be rainy? Unfortunately, reliable answers to such questions are not possible, despite the progress in climate science. Nevertheless, there are quantities like the sea surface temperature of the North Atlantic, that are known to promote trends in the weather over Europe. To that, North Atlantic sea surface temperatures are predictable several years into the future – as suggested by a new study carried out under the lead of GEOMAR Helmholtz Centre for Ocean Research Kiel and published in Geophysical Research Letters.

Our planet’s climate system is complex. Different components, like atmosphere, ocean, sea and land ice influence each other and cause natural climate variations on a range of timescales from months to decades. Particularly for the long timescales, the ocean plays an essential role. In a new study published today, a research team led by GEOMAR Helmholtz Centre for Ocean Research Kiel investigates the possibility of utilizing the wind field to predict the North Atlantic surface temperature variations several years into the future. Such variations of the sea surface temperature also have the potential to influence the climate in Europe.

‘Predictions of climate variations are possible for certain regions on Earth’, says Dr. Annika Reintges, scientist at GEOMAR and lead author of the study, that is now published in Geophysical Research Letters. One example is the, every couple of years, recurring El Niño phenomenon in the tropical Pacific, that can be predicted a few months ahead. ‘Our study focuses on longer timescales, in a region where natural variability on decadal timescales is much larger than in the tropics.’, Reintges continues.

Are such predictions possible? What are the requirements and which kind of information can be provided by such predictions? These questions were addressed by a research team of GEOMAR and of the Leibniz Institute for Baltic Research Warnemünde. ‘Indeed, long-term predictions are possible. This is enabled by the slow, over several years, varying oceanic processes.’, explains Dr. Reintges. The difficulty is that ocean observations - that are necessary to start the model computation – must be as accurate as possible. However, ocean observations, in particular below the surface, are limited in quantity and quality,’ says Reintges.

‘For the predictions in our study, we did not use any ocean observations. Instead, we create oceanic start values, by prescribing only observed variations in the wind at the sea surface. After some time, this brings the ocean of the model into a state that is sufficiently realistic to start successful predictions for even more than 7 years into the future,’ explains the author of the study.

The research team suggests the following mechanism to explain this fact: The winds cause a change in the ocean circulation. By this, a certain region in the North Atlantic accumulates an anomalous amount of heat. This heat is then transported towards Northeast over a time of several years. This finally results in a warming of the sea surface in the eastern North Atlantic, in response to the winds many years before.

Variations in the water temperature of the North Atlantic provide starting points for multi-year climate predictions, as they also influence the climate in Europe. Photo: Arne Körtzinger/GEOMAR

Wind field variations can be used to predict changes in sea surface temperature in the Atlantic Ocean over a period of years. Graphic: Annika Reintges, edited by Christoph Kersten/GEOMAR