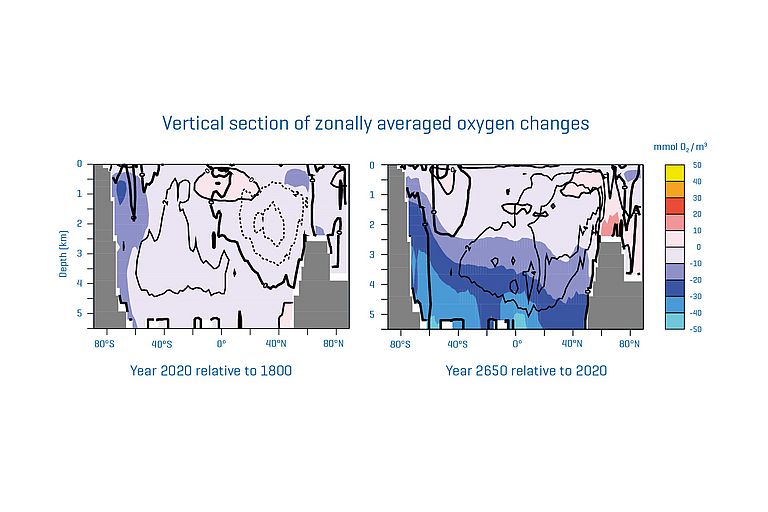 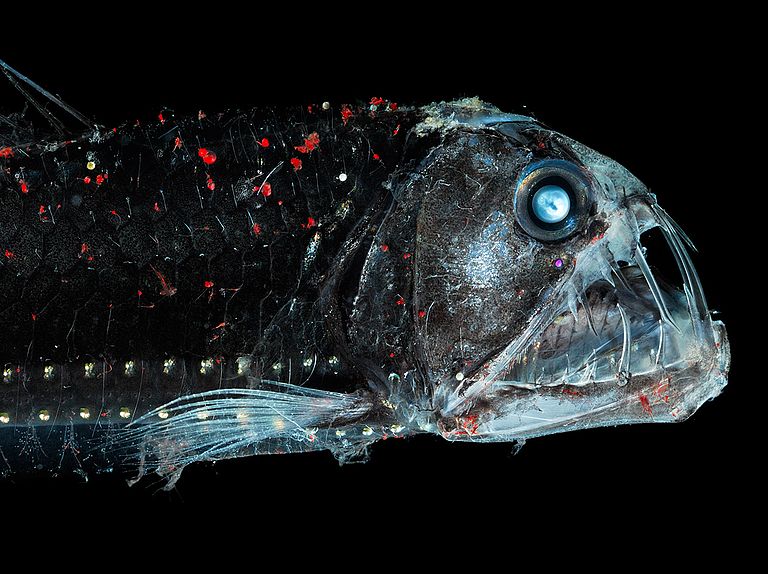 The habitat for deep-sea organisms (e.g. the viper fish) could become smaller in the future. Photo: S. Zankl.

Oxygen in the ocean will continue to decrease for many centuries

16 April 2021/Kiel. According to a new study published today in the scientific journal Nature Communications, the oxygen content in the oceans will continue to decrease for centuries even if all CO2 emissions would be stopped immediately. According to the author, Prof. Dr. Andreas Oschlies, from GEOMAR Helmholtz Centre for Ocean Research Kiel, the slowdown of ocean circulation and the progressive warming of deeper water layers are responsible for this process.

The life of almost all animals in the ocean depends on the availability of oxygen, which is dissolved as a gas in seawater. However, the ocean has been continuously losing oxygen for several decades. In the last 50 years, the loss of oxygen accumulates globally to about 2% of the total inventory (regionally sometimes significantly more). The main reason for this is global warming, which leads to a decrease in the solubility of gases and thus also of oxygen, as well as to a slowdown in the ocean circulation and vertical mixing. A new study published today in the scientific journal Nature Communications shows that this process will continue for centuries, even if all CO2 emissions and thus warming at the Earth's surface would be stopped immediately.

“In the study, a model of the Earth system was used to assess what would happen in the ocean in the long term if all CO2 emissions would be stopped immediately”, explains the author, Professor Andreas Oschlies from GEOMAR Helmholtz Centre for Ocean Research Kiel. “The results show that even in this extreme scenario, the oxygen depletion will continue for centuries, more than quadrupling the oxygen loss we have seen to date in the ocean “, Oschlies continues.

The long-term decrease in oxygen takes place primarily in deeper layers. According to Prof. Oschlies, this also has an impact on marine ecosystems. A so-called 'metabolic index', which measures the maximum possible activity of oxygen-breathing organisms, shows a widespread decline by up to 25%, especially in the deep sea (below 2000 metres). This is likely to lead to major shifts in this habitat, which was previously considered to be very stable, explains the oceanographer. These changes have already been initiated by our historical CO2 emissions and are now on their way to the deep ocean. He recommends that a comprehensive investigation of the deep ocean habitat, which has only been studied randomly so far, should take place before this environment, that is deemed as having been stable for many millennia, is likely to change significantly due to the now expected decrease in oxygen.

In the upper layers of the ocean, the model shows a much faster response to climate action. There, a further expansion of the relatively near-surface oxygen minimum zones can be stopped within a few years if the emissions were stopped. An ambitious climate policy can therefore help to prevent at least the near-surface ecosystems from being put under further pressure by a progressive decrease in oxygen.

The study was inspired by discussions with members of the Collaborative Research Centre "Climate-Biogeochemical Interactions in the Tropical Ocean" (SFB 754) completed just over a year ago, and the Global Ocean Oxygen Network (GO2NE), and will be followed by more detailed investigations within the framework of the UN Decade of Ocean Sciences for Sustainable Development 2021-2030.

The habitat for deep-sea organisms (e.g. the viper fish) could become smaller in the future. Photo: S. Zankl.