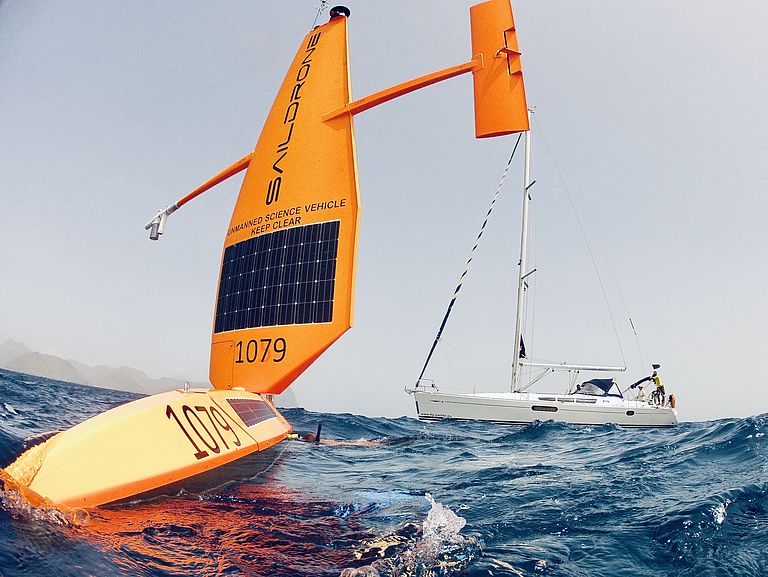 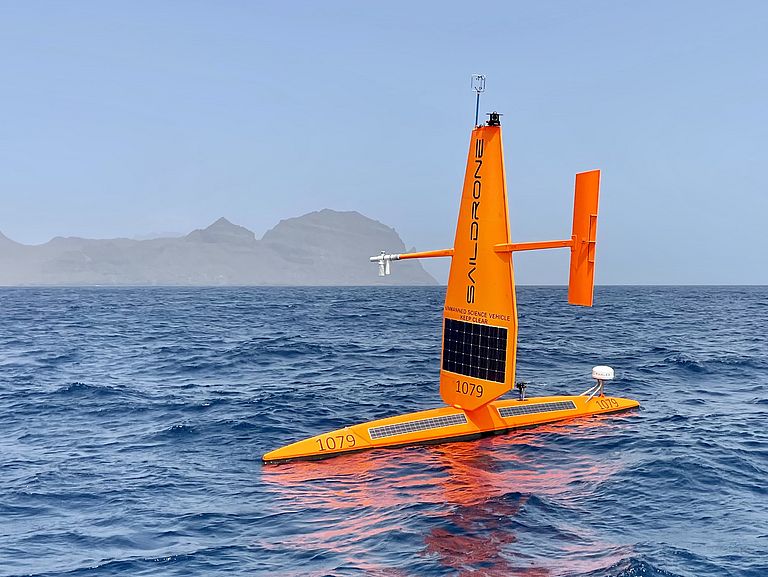 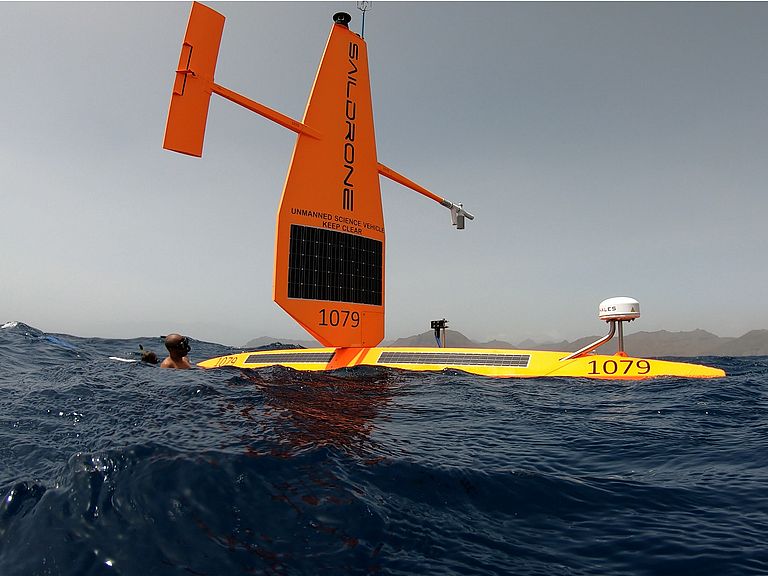 A diver checks the saildrone after its trip across the Atlantic. Photo: Edson Silva Delgado

01.10.2021/Kiel/Mindelo. A signal-red autonomous small sailboat is currently cruising the tropical Atlantic to collect detailed information about carbon dioxide concentrations at the ocean surface. The sailing drone, which is being used for the first time as part of the European project EuroSea and the project SAILDRONE, both led by GEOMAR Helmholtz Centre for Ocean Research Kiel, is intended to help improve ocean observation in the tropical Atlantic. Its data can also be used for projections of future changes and to better protect and sustainably use the ocean.

How fast does the ocean warm? How much carbon dioxide does it absorb? How do these natural processes differ in the various ocean regions and how are they affected by climate change? What are the consequences for life in the ocean? And how can important changes in the ocean be technically assessed in view of its tremendous size? Under the leadership of GEOMAR Helmholtz Centre for Ocean Research Kiel, researchers from France, Brazil and Germany are currently investigating how autonomously sailing drones can contribute to a better understanding of ocean change. Their work is carried out as part of the European project EuroSea and the project SAILDRONE funded by the German Federal Ministry of Education and Research (BMBF). The more data is obtained and evaluated, the better the effects of climate change on the ocean and its contributions to human well-being can be assessed. Risks can be identified earlier and measures for protection and sustainable use can be developed.

The starting point for this scientific mission was Cabo Verde off West Africa. The drone that was developed in the United States of America arrived by sea: “The device sailed to our research station in Cabo Verde following its programmed route, where we were able to check it and prepare it for its first mission,” reports Dr. Björn Fiedler, marine chemist at GEOMAR. “Now we are steering it online southwards beyond the equator and then towards Brazil. On the way, it will record carbon dioxide concentrations at the sea surface for four months with high-precision sensors and feed its information into our data network almost in real time.” At the end of the mission, the drone will transit back to the manufacturer.

The signal-red, seven-metre-long boat with a five-metre-high wing is powered by the wind and supplies its electronics for measurements and navigation via solar panels. It can reach top speeds of five to six knots. The sailing drone is able to reach a target region completely autonomously, for example by cruising on the wind, in order to then carry out targeted scientific measurements there.

Measurements from the sailing robot is made available live via the BELUGA platform and can there for example be compared with current satellite data to improve the mission planning. The detailed data on the carbon dioxide concentration at the sea surface illustrate current changes in the ocean chemistry. Based on this, it is possible to estimate how much additional carbon the ocean is able to absorb in the future – a natural process that can reduce the effects of climate change.

The tropical ocean regions play an important role in the global climate system due to the strong interactions between the ocean and the atmosphere, not only in terms of the exchange of heat but also for relevant greenhouse gases such as carbon dioxide. In the tropics, these are rapidly transported to higher layers of the atmosphere and thus fed into the global climate system. At the same time, very little long-term data is available about these regions, which makes a precise assessment of these processes in the tropical Atlantic significantly more difficult.

Furthermore, the information allows conclusions about the immediate living conditions for animals and plants. “The saildrone is additionally equipped with a scientific echo sounder, which allows us to look into the ocean from the surface down to a depth of 800 metres and provides a precise picture of the distribution of zooplankton and fish in the upper 800 metres of the water column,” says Dr. Helena Hauss, marine ecologist at GEOMAR. “These simultaneous measurements are also valuable, for example, for the identification of biological ‘oases’, the sustainable management of marine resources or the establishment and monitoring of protected areas in the region.”

“The drone has the potential to become a very important player in the international observation network in the tropical Atlantic, as very few measurements for carbon dioxide have been made in this region so far,” explains Dr. Björn Fiedler. “It complements and links measurements from fixed moorings and drifters travelling with ocean currents, as well as from scientific expeditions. The sailboat carries a highly accurate carbon dioxide measurement system, which helps to improve the measurements of the previous platforms.”

“The EU project EuroSea aims to improve systems for ocean observation and -forecasting,” adds Dr Toste Tanhua, marine chemist at GEOMAR and coordinator of EuroSea. “We want to offer information that is necessary for a sustainable economy in terms of the ocean and strengthen the well-being and safety of society. With the sailing drone, we are once again getting closer to this goal.”

A diver checks the saildrone after its trip across the Atlantic. Photo: Edson Silva Delgado