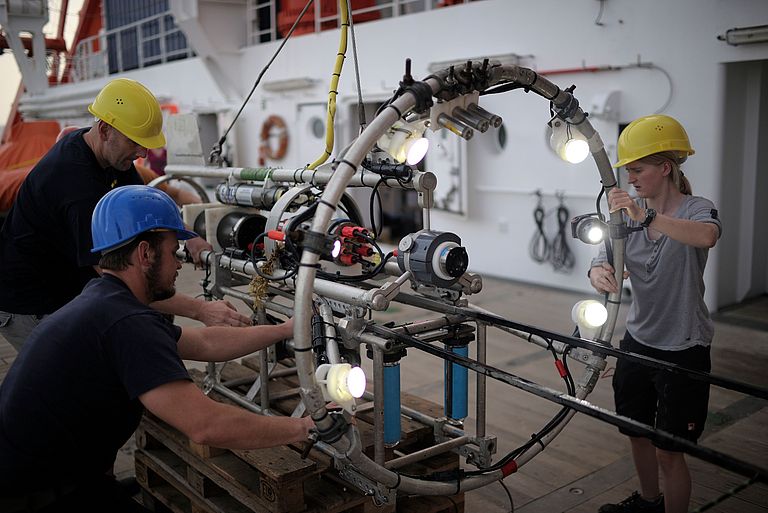 During Expediton MSM49, the PELAGIOS video system is prepared for a mission. Photo: Solvin Zankl, www.solvinzankl.com 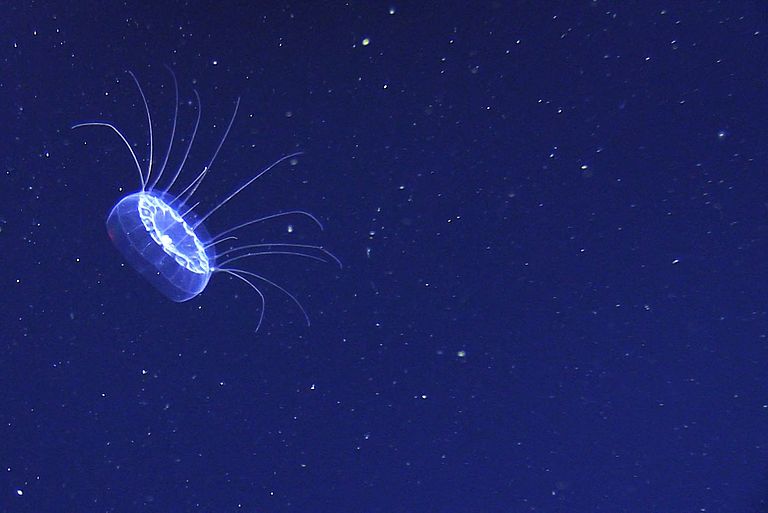 Jellyfish Solmissus. It seems to cope better with the low-oxygen conditions around Cape Verde than other species of gelatinous plankton. However, further analysis is needed. To that end, the team has also taken samples during follow-up expeditions with the submersible JAGO. This photo was taken during one of these expeditions. Photo: Henk-Jan Hoving/GEOMAR from the submersible JAGO 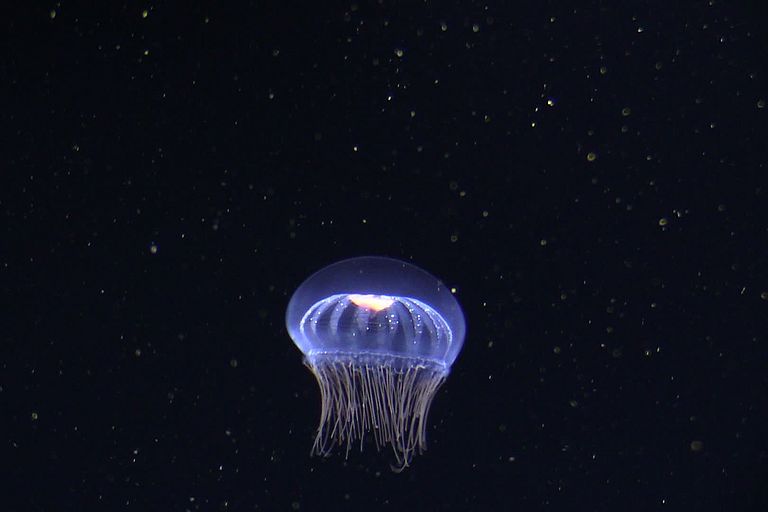 New insights into the world of gelatinous plankton

14 December 2020/Kiel. Little is known about the life of jellyfish and other representatives of gelatinous plankton in the open ocean. Scientists at the GEOMAR Helmholtz Centre for Ocean Research Kiel have now published a study in the international journal Scientific Reports, which was conducted by using a deep-sea camera system in the water column and by combining in situ video observations with environmental data. For the first time it provides underwater observations on the distribution and diversity of abundant gelatinous plankton species in relation to their environment in the tropical Northeast Atlantic, one of the most productive ocean regions in the world.

Siphonophores, pelagic tunicates, comb jellies, jellyfish - gelatinous plankton is not only very diverse, it also plays an important role in the food web and carbon transport in the ocean. Nevertheless, little is known about the distribution, abundance, diversity and behaviour of the different species, especially further away from the coast in the so-called deep-sea pelagial. "Most of the knowledge about plankton in the open ocean has been gained with the help of net catches. However, gelatinous plankton is so fragile that it cannot be properly recorded in this way. This makes deep sea gelatinous plankton particularly poorly known," explains marine biologist Dr. Henk-Jan Hoving from the GEOMAR Helmholtz Centre for Ocean Research Kiel.

In the international journal Scientific Reports, Dr. Hoving and several colleagues from GEOMAR now present new findings on the distribution and composition of gelatinous plankton around the Cape Verde Islands in the tropical Northeast Atlantic. These new insights were obtained with the help of a specifically designed, towed deep-sea camera system. "This has given us a much more detailed insight into the ecology of larger organisms around an oceanic oxygen minimum zone. Now, for the first time, we can discuss to what extent the observed expansion of the low oxygen zone may result in shifts of deep-sea gelatinous distribution in the eastern Atlantic," says Dr. Hoving.

During the expedition MSM49 of the German research vessel MARIA S. MERIAN in 2015 around the Cape Verde Islands, the camera system PELAGIOS (Pelagic in Situ Observation System) was repeatedly deployed during day and night, collecting around 40 hrs of pelagic video. The device, equipped with a video camera, light sources to illuminate the water column and sensors to measure environmental data was towed by the MERIAN in water depths down to 1000 meters.

The camera recorded a variety of delicate organisms in their natural habitat that could never have been captured intact by classic net catches, and could be related to physical properties obtained by sensors as well as copepod abundance and particle distribution. Dr. Helena Hauss, co-author of the study, says: “Besides being non-destructive, optical observations have the advantage that they do not filter a large volume of water in like nets do and therefore can reveal tight relationships between certain taxa and environmental drivers, resulting in a very distinct community structure in different parts of the water column”.

“We documented the vertical day and night distribution of 46 different oceanic taxa including gelatinous plankton in relation to environmental conditions and the oxygen minimum zone existing in the region,” reports Dr. Hoving. While some taxa like the comb jelly Beroe seem to avoid the oxygen-depleted water layers, the team was able to detect other gelatinous plankton (e.g. the siphonophore Lilyopsis, jellyfish Halitrephes, Solmissus) inside this layer. Distribution of species may be driven by multiple factors such as temperature, food, light and oxygen or a combination and physiological experiments are needed to investigate the tolerance of observed species towards low oxygen.

“Measurements by GEOMAR colleagues show that the oxygen minimum zone in the Cape Verde region is expanding,” says Dr. Hoving, “which means that the habitat is getting smaller for some species, but larger for others. So if there are further changes, a shift in species can be expected”. The current study is important because it can serve as a basis for monitoring future changes in the ecosystem, the biologist adds.

Of course, it also leaves questions unanswered. Many of the observed taxa could not be identified to species level, and some of the encountered taxa may involve new species. In the past years, Dr. Hoving and his colleagues have repeatedly conducted expeditions around Cape Verde to collect further data. The evaluations of these expeditions are still ongoing but allowed close up observation and capture of some of the organisms that were previously documented during MSM49. “We are pursuing an interdisciplinary approach that combines biodiversity research, physiology and biological, physical and chemical oceanography to unravel the multitude of factors that influence the distribution of animals in a rapidly changing ocean,” he concludes.

Please note:
The study was funded by the Cluster of Excellence 80 “The Future Ocean” (Grant numbers CP1218 and CP1650).

Images provided with this press release may be used free of charge for editorial purposes provided the source is acknowledged.

During Expediton MSM49, the PELAGIOS video system is prepared for a mission. Photo: Solvin Zankl, www.solvinzankl.com

Jellyfish Solmissus. It seems to cope better with the low-oxygen conditions around Cape Verde than other species of gelatinous plankton. However, further analysis is needed. To that end, the team has also taken samples during follow-up expeditions with the submersible JAGO. This photo was taken during one of these expeditions. Photo: Henk-Jan Hoving/GEOMAR from the submersible JAGO