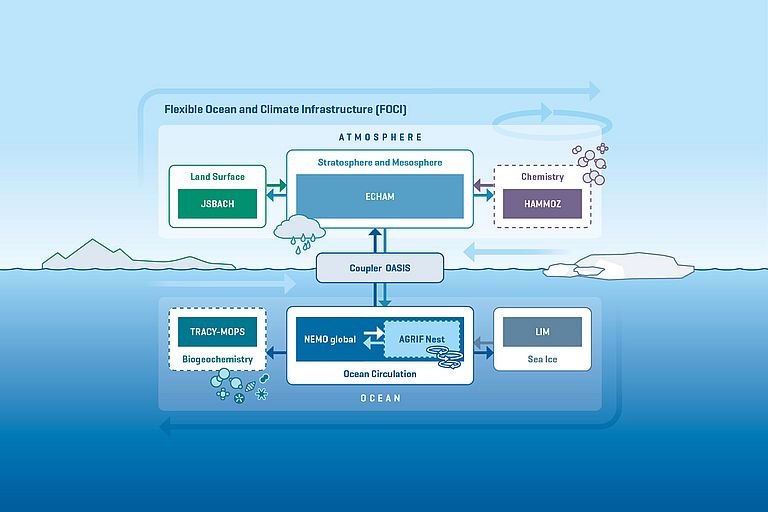 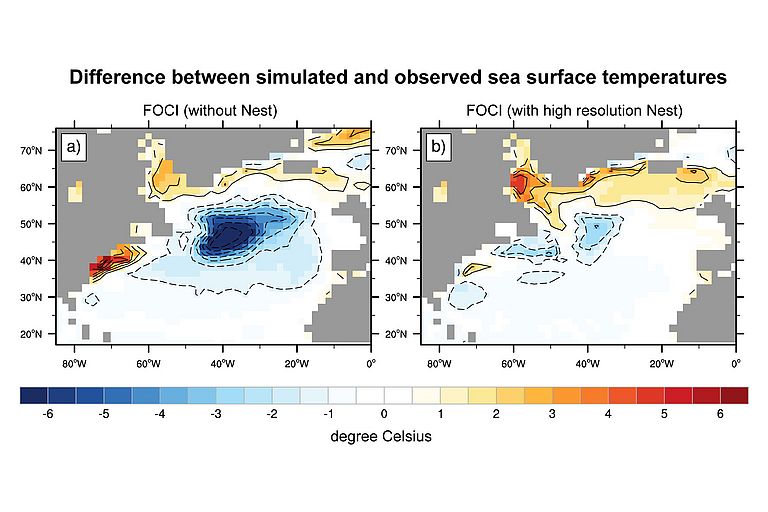 24.06.2020/Kiel. The continuous development and improvement of numerical models for the investigation of the climate system is very expensive and complex. At GEOMAR Helmholtz Centre for Ocean Research Kiel a new modular system has now been presented, which allows investigations to be carried in a flexible way, with varying levels of complexity. The system, called FOCI (Flexible Ocean and Climate Infrastructure), consists of different components that can be adapted and used in different disciplines, depending on the research question and available computing power.

In their model simulations, climate researchers always have to make compromises. Even with the largest computers available worldwide, they can only reproduce the real world to a limited extent. Depending on the application, simplifications have to be made in the spatial resolution, but also in the physical processes represented by the model. While model experiments over periods of months to a few years can often still be made with high spatial resolution, integrations over centuries to millennia can only be performed at coarser resolution. In the past, models were developed for a specific purpose. Now, GEOMAR Helmholtz Centre for Ocean Research Kiel presented a flexible model kit, called FOCI (Flexible Ocean and Climate Infrastructure). It is based on the Earth system model of the Max Planck Institute for Meteorology in Hamburg and has been modified with the NEMO ocean model, in order to represent small-scale processes in the oceans at higher resolution.

“In FOCI we combine decades of expertise in ocean and climate modelling at GEOMAR. The new system enables the investigation of new questions such as the influence of the stratospheric ozone hole on the circulation in the Southern Ocean or the impact of the Gulf Stream on atmospheric processes”, explains Professor Dr. Katja Matthes from the Maritime Meteorology Research Unit at GEOMAR.

“With the new system, we can investigate many different research questions on ar range of time scales”, Professor Dr. Arne Biastoch, head of the Ocean Dynamics Research Unit at GEOMAR, points out. “We initially performed a set of standardised basic tests with the FOCI system”, the oceanographer continues. “We had to find out whether the model system is capable of reproducing the observed climate and the present ocean circulation. Only if we are confident that the system can successfully simulate the present conditions within limited error bands it can be used to investigate unknown phenomena or for the predictions of future climate conditions”. The results, which have been published in the international journal Geoscience Model Development, are very promising. “In particular, our special know-how in operating the ocean model regionally at very high resolution improves the results considerably and reduces, for example, common model errors such as deviations in sea surface temperatures in the Gulf Stream system”, says Professor Biastoch. FOCI also enables configurations which were previously impossible at spatial resolutions of up to one kilometre in the ocean.

The basic experiments carried out so far include a control run over 1,500 years with pre-industrial greenhouse gas concentrations and several experiments covering the period from 1850 to the present day, for which observational data are available for verification. “The current results are very encouraging”, says Katja Matthes. The system will be further improved and used for various questions to study natural climate fluctuations, but also anthropogenic climate change. “From our point of view, FOCI is the ideal system for GEOMAR to simulate small-scale processes in the ocean, interactions between stratosphere and troposphere as well as biogeochemical processes in the ocean. It also allows us to carry out complex projects such as a large number of model simulations over several decades with a reasonable amount of computing time”, Professor Matthes concludes.