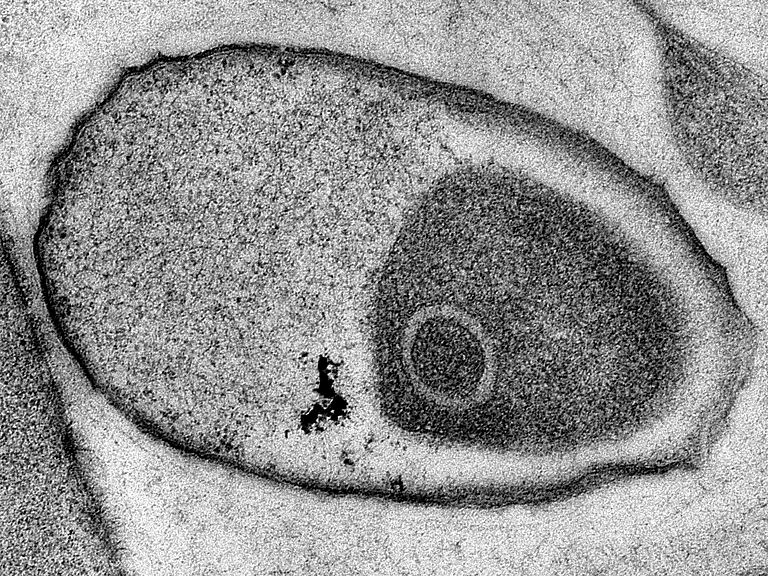 Transmission electron microscope image of an unknown bacterium that lives exclusively in marine sponges. Sponge symbionts cannot yet be cultivated and can only be given a provisional name according to the current codex. Photo: Dr. Martin Jahn (GEOMAR)

Call for a new order in Microbiology

15 June 2020/Reno/Kiel. The long-standing rules for assigning scientific names to bacteria and archaea are to be updated according to a recently published statement supported by more than 100 microbiologists from all over the world. Among the signatories are also researchers from the GEOMAR Helmholtz Centre for Ocean Research Kiel. The declaration has been published in the renowned scientific journal Nature Microbiology.

Bacteria and archaea (unicellular organisms without a nucleus) form two of the three areas of life on earth and are named after the International Code of Nomenclature of Prokaryotes (ICNP; or short “the code”). At present, the code only recognises species that can be cultivated from laboratory cultures - a requirement that has long been problematic for microbiologists studying bacteria and archaea in nature.

Since the 1980s, microbiologists have been using genetic sequencing techniques to extract and study DNA from microorganisms directly from the environment, in a variety of habitats ranging from the polar oceans to deep underground mines and the surface of human skin. For the vast majority of these species, there is no method of cultivating them in the laboratory yet, and therefore, they cannot be officially named under the current code.

"In recent years there has been a flood of genome-based discoveries of archaea and bacteria collected from the environment, but there is no system for officially naming them, which leads to much chaos and confusion in the field," says Dr. Alison Murray, research Professor of Biology at the Desert Research Institute (DRI) in Reno, USA, lead author of the consortium. "It is incredibly important to be able to represent the diversity of uncultivated organisms known by their genome sequences in a common language," Murray continues. "Imagine that you have discovered a new species of bacteria and have no opportunity to tell your colleagues about it," Ute Hentschel Humeida, Professor of Marine Microbiology at GEOMAR and co-author of the study, describes the problem. Many environmental bacteria, especially in the marine environment, cannot be cultivated, and therefore the revision of the taxonomic code is so important.

In a recent article published in the journal Nature Microbiology, the authors present the reasons for updating the existing rules for naming new bacterial and archaea species and suggest two possible approaches.

As a first option, the group proposes to formally revise the code to include uncultivated bacteria and archaea represented by DNA sequence information instead of the currently required living culture samples. As an alternative, they propose to create a completely separate naming system for uncultivated organisms that could be merged with the current code at some point in the future.

"For researchers in this field, the benefits of proceeding with either of these two options will be enormous," said Dr. Brian Hedlund, Professor of Biosciences at the University of Nevada, Las Vegas, "We will be able to create a unified list of all uncultivated species discovered in recent decades and establish universal quality standards for how and when a new species should be named.

"Our proposals provide a framework that offers a structured way to communicate the vast untapped biodiversity of the microbial world within the scientific community and to the public," says Prof. Dr. Ute Hentschel Humeida, "which is why this change is so important".

According to Professor Murray, the next step is to develop an implementation strategy to move forward with one of the two proposed options, while at the same time involving the many microbiologists who have contributed to this consensus statement and others who want to help ensure that this change is implemented. Many researchers are already very interested in contributing to this procedure.

"This is an exciting area we are in right now, because we are describing the diversity of life on Earth and discovering new strains, just as scientists did in the 19th century when they discovered even larger organisms," said Dr. Murray. "Many paradigms have changed in the way we understand how the world works and how much diversity there is out there - and this is another change that needs to be made. We're going to have to change it or we're going to live in chaos.

Transmission electron microscope image of an unknown bacterium that lives exclusively in marine sponges. Sponge symbionts cannot yet be cultivated and can only be given a provisional name according to the current codex. Photo: Dr. Martin Jahn (GEOMAR)