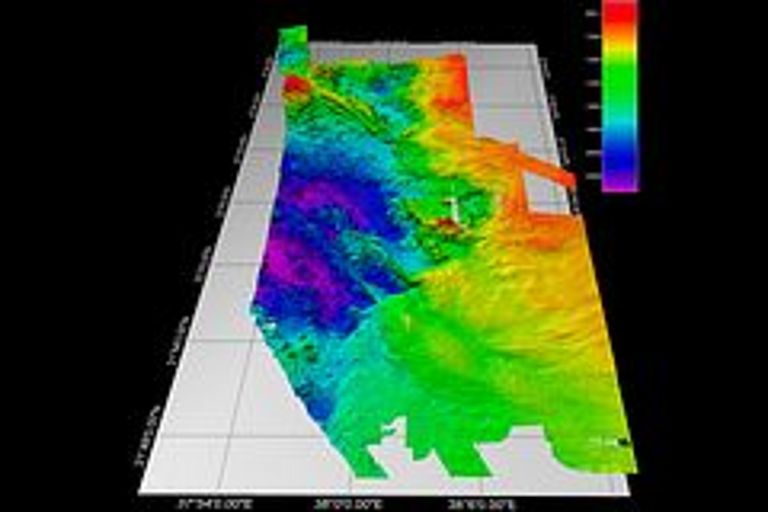 Map of the Hatiba Deep in the Red Sea, based on data from the multi beam echo sounder of RV POSEIDON. 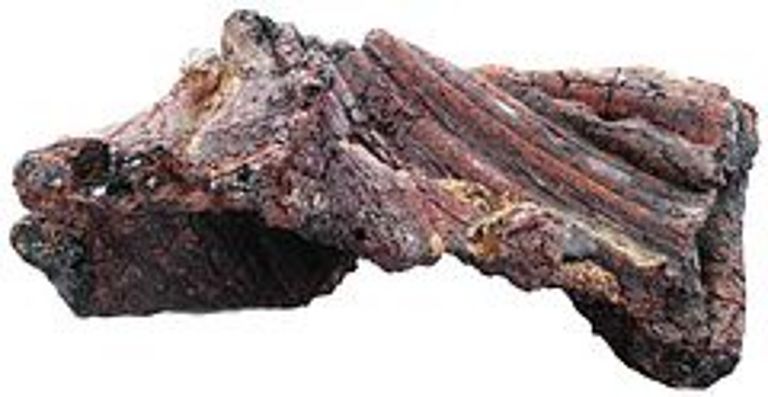 March 17, 2011/Kiel. In the winter of 2011, the RV POSEIDON started on a scientific expedition in the Red Sea. For nine years, no German research vessel had been to this area. In collaboration with colleagues from Saudi Arabia, four working groups from the Leibniz Institute of Marine Sciences in Kiel collected a basic dataset covering the geology, geochemistry, physics and biology of the Red Sea's fascinating marginal sea environment. After having returned, all groups are now beginning to evaluate data and samples collected on the expedition.

Time travel is not necessary to get an idea of how the Atlantic Ocean may have looked about 100 million years ago. A trip to the Red Sea will suffice. Just under 2300 km long, the Red Sea extends over the fracture zone between the African and Arabian continental plates, which are drifting apart at a speed of approximately one centimetre per year. Millions of years from now the Red Sea will have grown into a new ocean. Several scientist groups from the Leibniz Institute of Marine Sciences in Kiel (IFM-GEOMAR) worked in the Red Sea on the research vessel POSEIDON from January to the middle of March to collect basic data on the geology, geochemistry, physics and biology of a nascent ocean. "For nine years, there had been no expedition of a German research vessel to this scientifically fascinating area" says Dr. Warner Brückmann from IFM-GEOMAR. Dr. Brückmann coordinates the "Jeddah Transect Project", a collaboration between IFM-GEOMAR and the King Abdulaziz University in Jeddah, Saudi Arabia, through which the recent expedition was made possible. All working groups have now returned to Kiel. They have brought fascinating impressions and promising data from regions of the Red Sea which had been practically uncharted before.

The campaigns started with very fundamental work: mapping the seafloor. "Hardly any precise maps are available from the Red Sea, and especially from the geologically interesting areas", Dr. Nico Augustin, marine geologist at IFM-GEOMAR, explains. As the POSEIDON was furnished with one of the most advanced swath mapping systems worldwide in 2010, the scientists were able to generate high-resolution maps from the Hatiba Deep on the central trench axis. Based on these maps, the geologists identified some scientifically interesting sites on the seafloor —up to 2000 m deep in this area. From these sites they were able to retrieve volcanic rock and sediment samples. According to Augustin, "It appears as if there has been some volcanic activity in geologically recent time. We are thus able to observe an active phase of Red Sea spreading."

Lead by geochemist Dr. Mark Schmidt, a second team concentrated on the Atlantis II deep, which is located a bit further south. This area is characterized by a unique hot brine, i.e. highly saline waters up to 68°C hot at a water depth of about 2000 m. A newly developed, video-guided CTD rosette water sampler enabled highly precise sampling of this area for the first time while providing video images of the seafloor underneath. Another new development was employed here: a microstructure probe which reacts extremely fast to changes at the interface between normal seawater and brine. "We wish to learn more about exchange processes between the brine and the deep water of the Red Sea. Even if the data have not yet been processed in detail, they promise to yield interesting results on material flow and exchange processes in the deep sea", says Dr. Schmidt.

Two more working groups focussed on the ecology of the Red Sea. The first of these groups, consisting of scientists from Kiel and Jeddah, used the POSEIDON to examine the biological diversity of plankton. "Such data are of great importance for the management of fishery and environmental matters", biologist Dr. Benjamin Kürten explains, "since plankton is the basic food resource for all higher organisms in the Sea. We generally know that there are fewer nutrients in the north of the Red Sea than in the south. Yet, the effects, for example, on food chains are mostly unknown. We wish to fill this gap in knowledge."

The second German/ Saudi Arabian biology group did land-based work on the coral reefs off the Saudi Arabian coast. After a four week expedition between desert tracks and coral reefs, Prof. Martin Wahl from IFM-GEOMAR sums up: "Some reefs were found in a very natural and healthy condition, others were clearly damaged by human impact or natural causes." Prof. Wahl and his colleagues did fundamental work here: "No inventory of the coral reefs in the eastern Red Sea has been done so far", he says, "yet such basic data is important in order to recognize and possibly minimize threats to ecological systems.“ In the next two years, this pilot study will be followed by four in-depth surveys on how the reefs react to anthropogenic and natural stress factors.

According to project manager Dr. Warner Brückmann, the first four expeditions within the Jeddah Transect Project have come to an overall positive result: "In the beginning, there were some logistic problems. But the cooperation with our Saudi Arabian colleagues was extremely valuable for both sides. We got a chance to explore regions which are only rarely accessible to marine scientists. In turn, we were able to share our long-standing experience in fields such as geological surveying and systematic environmental monitoring."

The work will be continued, further expeditions for this purpose are already being planned.

Map of the Hatiba Deep in the Red Sea, based on data from the multi beam echo sounder of RV POSEIDON.