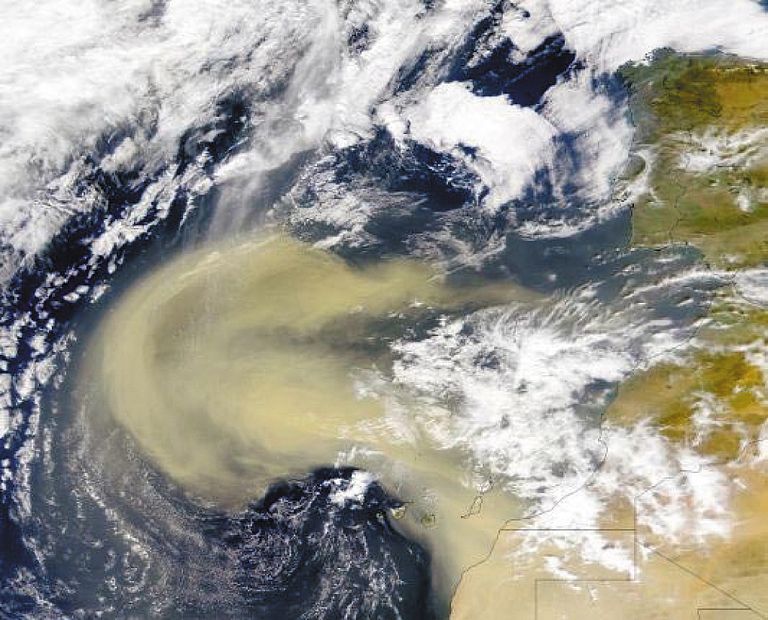 Dust storm over the eastern Atlantic. The dust contains iron which is a natural fertilizer of the ocean leading to enhanced plankton production and subsequently to a higher uptake of CO2. Photo: NASA

Ocean Iron Fertilization: A Curse or a Blessing?

December 15, 2009/Kiel. Ocean iron fertilization (OIF) is generally considered to constitute a potential geoengineering method with which to sequester more CO2 in the oceans and thus mitigate the effects of anthropogenic climate change. Nevertheless, large-scale OIF is highly controversial because the efficiency of OIF and its potential impacts on ocean ecosystems has not been well researched. OIF thus involves a high degree of uncertainty. An interdisciplinary study by researchers in Kiel who work together in the Ocean of the Future Excellence Cluster calls for further research on OIF in order to be able to better assess its geoengineering potential. They maintain that the experiments that would have to be conducted to pursue this research are legally permissible and scientifically justifiable.

OIF research is controversial. Because of the potential negative impacts that large-scale OIF could have on marine ecosystems, research involving small-scale OIF is disapproved of in many parts of the world. In a new interdisciplinary study, a group of researchers in Kiel have assessed the pros and cons of OIF research from scientific, economic, and legal points of view. In their study entitled “Ocean Iron Fertilization: Why Further Research Is Needed” and published by the Kiel Institute for the World Economy, they conclude that no scientific or economic criterion has been identified so far that would suggest that OIF should be rejected, a priori, as an adjunct climate protection measure. They also conclude that imposing a moratorium on OIF experiments would not be justifiable from a legal point of view. On the contrary, they state that analyzing the relevant international legal agreement with the precautionary principle in mind would seem to indicate that the agreements are in favor of permitting such experiments.

“In order to understand the impact of OIF on oceanic processes, further research of a noncommercial nature, research that serves only science, needs to be conducted,” states Professor Andreas Oschlies of the Leibniz Institute of Marine Sciences (IFM-GEOMAR). Otherwise, OIF as a geoengineering measure will be virtually ignored. “Model results and experiments have shown OIF of the Southern Ocean can cause a significant increase in the transport of carbon from surface waters into great depths,” according to Professor Oschlies. “From an economic point of view, OIF is thus more efficient than, for example, reforestation,” argues Wilfried Rickels of the Kiel Institute for the World Economy. The estimated costs of OIF are comparable to the costs of reforestation. OIF, however, could generate more CO2 certificates than reforestation, even when the costs of leakage are taken generously into account, according to Mr. Rickels. Legal experts have also given further OIF research the green light. “From the perspective of international law, the relevant agreements regarding the protection of the oceans indicate that OIF experiments are legal as long as they can be considered to constitute legitimate scientific research,” Professor Alexander Proelß of the Walter Schücking Institute for International Law explains. “In particular, the precautionary principle requires that the potential risks to marine ecosystems be weighed against the potential benefits for the climate,” Professor Proelß continues. Since the potentially negative effects of scientific OIF experiments are limited to relatively small areas, they should allowed in order to find out whether OIF can be used as a climate protection measure.

Dust storm over the eastern Atlantic. The dust contains iron which is a natural fertilizer of the ocean leading to enhanced plankton production and subsequently to a higher uptake of CO2. Photo: NASA