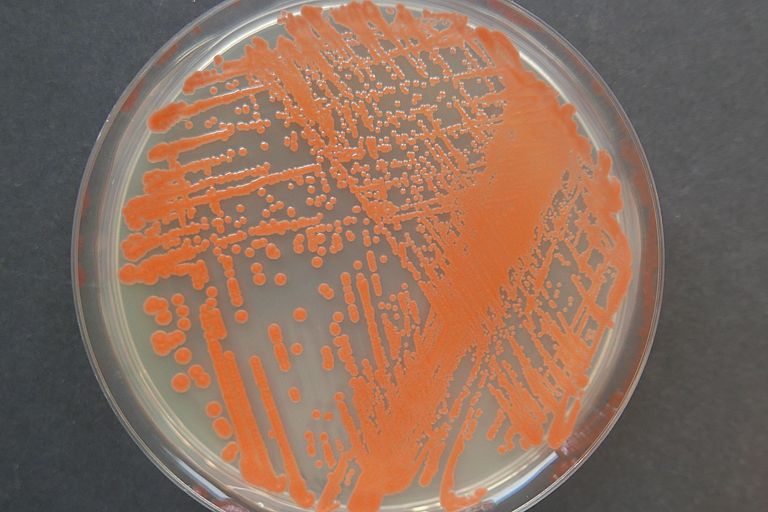 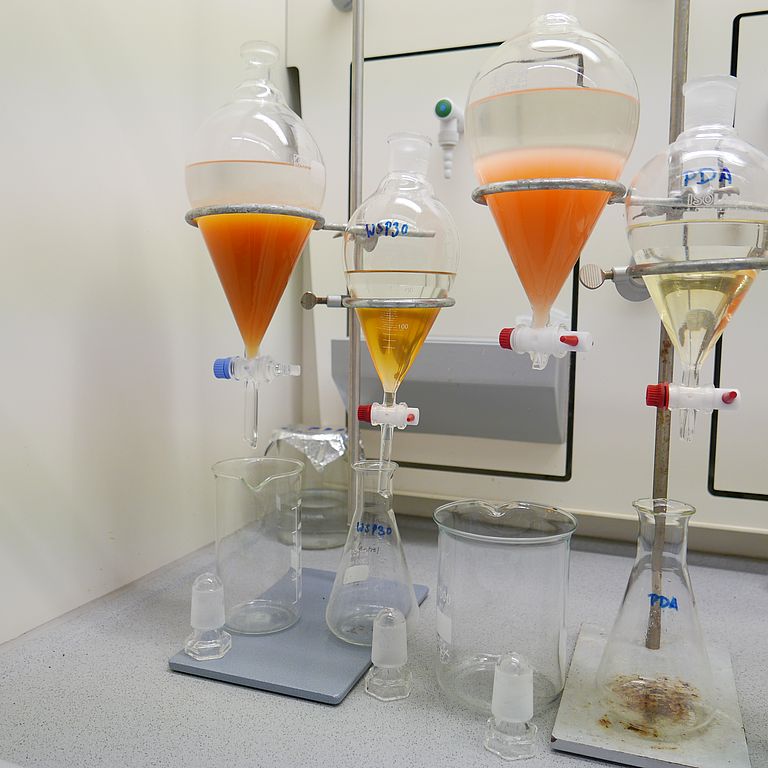 Extraction process of the red yeast Rhodotorula mucilaginosa. Natural products produced by the yeast are extracted from the culture by use of organic solvents. Subsequently the resulting extracts are tested for their bioactivity and analyzed for their metabolome. Photo: L. Büdenbender, GEOMAR.

On the trail of active ingredients from marine yeasts

20 January 2021/Kiel. Numerous natural products are awaiting discovery in all kinds of natural habitats. Especially microorganisms such as bacteria or fungi are able to produce diverse natural products with high biomedical application potential in particular as antibiotics and anticancer agents. This includes the so-called red yeast of the species Rhodotorula mucilaginosa, isolated from a deep-sea sediment sample from the Mid-Atlantic Ridge and analyzed for its genome and chemical constituents by researchers from GEOMAR Centre for Marine Biotechnology (GEOMAR-Biotech) of GEOMAR Helmholtz Centre for Ocean Research Kiel and Kiel University (CAU). In a joint effort, the scientists succeeded in demonstrating its anticancer and antibacterial effects. This study, partly-funded by Kiel Marine Science (KMS) of Kiel University, was recently published in the renowned scientific journal Marine Drugs.

A unique opportunity arose for researchers in the Department of Botanical Genetics and Molecular Biology at Kiel University, headed by Professor Frank Kempken. Via the Institute of Geosciences at Kiel University, his group had access to sediment samples from the Mid-Atlantic Ridge in 1,600 - 4,000 m depth collected during a research cruise with the German research vessel MARIA S. MERIAN. From one of these sediment cores taken at a depth of 3,600 m, Prof. Kempken´s group succeeded in isolating and cultivating living fungi of the species Rhodotorula mucilaginosa. This slowly growing type of yeast, which belongs to the so-called Basidiomycete yeasts should not be confused with the well-known baker's yeast. The species originally grows at great depth tolerating high hydrostatic pressure and rather cold temperatures.

“With the applied methodology we have succeeded in cultivating yeast colonies that can withstand and grow at room temperatures and under atmospheric pressure”, explains Prof. Kempken. “These experiments have shown once more, that microorganisms with specific physiological properties thrive in distinct ecological niches. The experiments have shown us that special ecological niches can produce microorganisms with special characteristics. The assumption about the adaptability of this special genus has therefore encouraged us to further analyze this species”, says Professor Frank Kempken, whose research group has been analyzing genomes of marine fungi for more than ten years. Postdoc Dr. Abhishek Kumar (Kiel University), who shares first authorship with Dr. Larissa Büdenbender from GEOMAR in the current study, finally succeeded to combine the genome of Rhodotorula mucilaginosa by assembling millions of sequenced DNA fragments. Moreover, genes encoding key components of the glycolipid biosynthetic pathway were identified - an important pathway with regard to development of natural substances for various applications in medicine and biotechnology, food, chemistry, or agriculture.

The analysis of the full metabolomic potential of a fungus is difficult, because many natural products are only produced under special conditions in their natural environment. Since it is impossible to mimic the conditions of Mid Atlantic Ridge in the lab, Professor Deniz Tasdemir, head of the research unit Marine Natural Product Chemistry at GEOMAR and director of GEOMAR-Biotech, and Dr. Larissa Büdenbender have decided to analyze the red yeast´s metabolite production and bioactivity under different growth conditions. We observed medium-dependent differential bioactivitiy, it was either cancer-inhibiting or antimicrobial”, says Professor Tasdemir. Next, they investigated the chemical composition, the so-called metabolome of the yeast using algorithm-based automated metabolomics. It showed that the red yeast is extremely rich in glycolipids, named polyol esters of fatty acids (PEFAs), phosphorus-free structural components of cell membranes possibly protecting the yeast against osmotic pressure in the deep-sea environment. Prof. Tasdemir says: ‘’We detected, at the first step of our investigations, many dozens of such compounds in the yeast, which supported the genome mining studies performed by our colleagues at Kiel University.’’ Dr. Büdenbender employed a targeted approach to purify the structurally very similar, hence difficult to purifycompounds. “Several isolated PEFAs were new to the literature and we determined their very complex chemical structures. It seems that these compounds show higher anticancer activity when they occur together, a phenomenon called synergism, and we are trying to understand the reasons for this effect” says Prof. Tasdemir.

The fruitful collaboration of these two complementary working groups at GEOMAR and Kiel University by applying multiple omics strategies has enabled the elucidation of the biosynthesis of novel natural products from a deep-sea red yeast at DNA as well as metabolite levels. Results obtained with this oily red yeast can contribute to the development of new pharmaceuticals but also may find biotechnological applications in food, chemical or agricultural industry and even in biofuels in the future.

Extraction process of the red yeast Rhodotorula mucilaginosa. Natural products produced by the yeast are extracted from the culture by use of organic solvents. Subsequently the resulting extracts are tested for their bioactivity and analyzed for their metabolome. Photo: L. Büdenbender, GEOMAR.