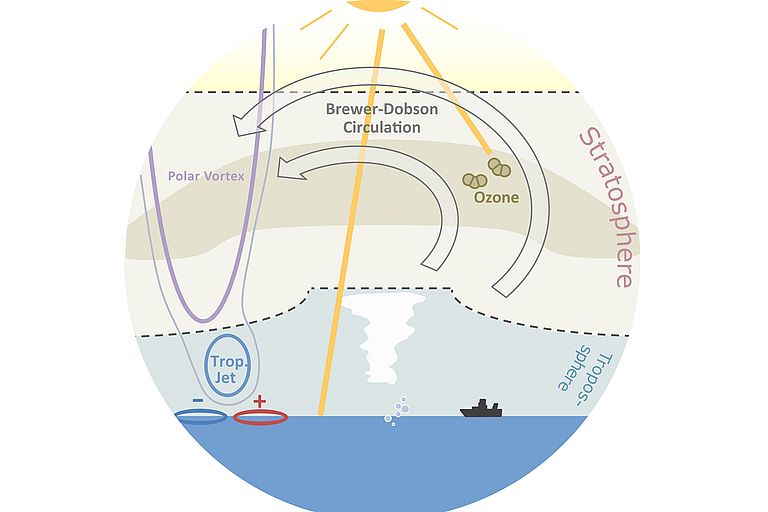 Schematic illustration of the influence of the ozone layer in the stratosphere on atmospheric dynamics. Graphic: Sabine Haase / GEOMAR

Ozone and the Jetstream: A complex relationship

More complex models are superior in the representation of atmospheric changes

26 November 2020 / Kiel. Ozone in the stratosphere not only protects life on earth from dangerous UV radiation. It can also influence the dynamics of the atmosphere and thus ultimately the weather in the lowest layer of the atmosphere, the troposphere. A new study conducted by the GEOMAR Helmholtz Centre for Ocean Research Kiel now shows that a precise but also complex calculation of ozone concentrations in atmosphere-ocean models is necessary to be able to understand changes of the jet stream in the Southern Hemisphere. The results have now been published in the international journal Atmospheric Chemistry and Physics.

Although the stratosphere is located at an altitude of ten to 50 kilometers, it does directly or indirectly influence life on the Earth's surface. Extreme events in the stratosphere can, for example, extend into the lower layers of the atmosphere and influence the daily weather there. The stratosphere is also home to the ozone layer, which is known above all for providing protection against harmful UV radiation from space. Less well known, but no less significant, is the fact that the ozone in the stratosphere also has an influence on the dynamics in the atmosphere. Fluctuations in ozone concentrations, for example, can influence the position of the so-called jet stream. Thus, they also affect temperatures on the earth's surface and ocean currents.

To better assess the effects of such ozone fluctuations, science uses extremely complex computer models of the atmosphere and the ocean. It is common practice to specify the ozone from observational data or precalculated model fields in order to limit the computational effort. Scientists at the GEOMAR Helmholtz Centre for Ocean Research Kiel have now compared this type of model with another in which the ozone is calculated interactively from the model itself. “Our comparison shows that the interactive representation of the ozone in the model can better represent already observed changes in the stratosphere in the Southern Hemisphere than a model with prescribed ozone values”, says Dr. Sabine Haase from GEOMAR. She is first author of the study, which has now been published in the international journal Atmospheric Chemistry and Physics.

It is known that the depletion of the ozone layer in the lower stratosphere in the Southern Hemisphere caused the jet stream in the troposphere to shift towards the pole during the southern summer. “This in turn has a direct impact on the weather and the ocean there. Just as changes in the jet stream in the northern hemisphere can also influence the weather in Europe,” explains Dr. Haase.

However, the attempt to reproduce these changes in models has so far yielded very different results depending on the configuration of the models. “This is not satisfactory if you want to understand the overall system,” stresses the atmospheric researcher from Kiel.

When comparing the two types of model mentioned above, the team found that the interactive calculation of atmospheric chemistry leads to a stronger influence of ozone depletion on the jet stream in the stratosphere (polar vortex), which in turn can be decisive for the influence of the stratosphere on the troposphere, in particular on the poleward displacement of the tropospheric jet stream.

However, the disadvantage of interactive atmospheric chemistry in the model is about four times more computing time. In the end, however, the study shows that the additional computing time is well invested. ”An interactive calculation of the chemical processes is important to understand changes in the tropospheric jet stream in the Southern Hemisphere in connection with ozone fluctuations,“ summarizes Dr. Haase.

Schematic illustration of the influence of the ozone layer in the stratosphere on atmospheric dynamics. Graphic: Sabine Haase / GEOMAR