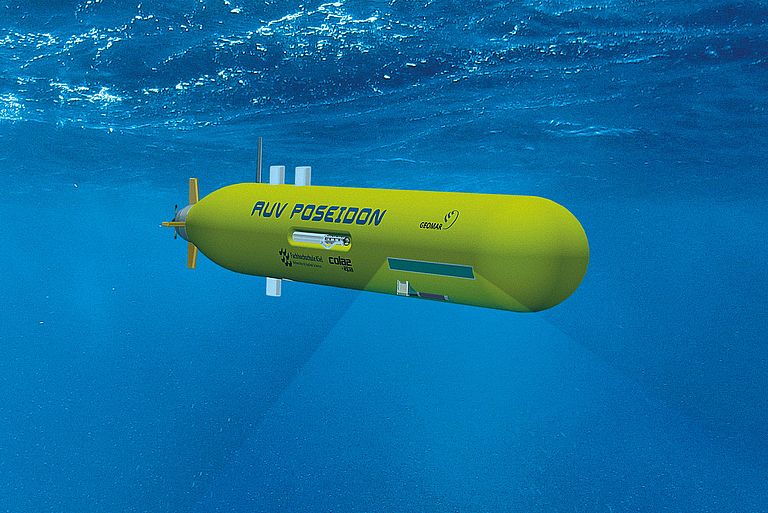 Externally, the new AUV POSEIDON will resemble the AUV ABYSS already operated at GEOMAR. However, it will be operated with its own software. Visualization: Janna Sprenger, Christoph Kersten/GEOMAR

POSEIDON to conduct research under water in the future

05 February 2021 / Kiel. For more than 40 years, the research vessel POSEIDON served marine research at GEOMAR before it was decommissioned and sold at the end of 2019. The state of Schleswig-Holstein is now making the 1.2 million euros from the sale available to the GEOMAR Helmholtz Centre for Ocean Research Kiel. It will be used to develop a new autonomous underwater vehicle (AUV) which will then also go on research missions under the name POSEIDON.

POSEIDON is a name rich in tradition for marine research in Kiel. As early as 1902, the first research ship, the imperial research steamer POSEIDON, was christened with this name and used for marine research until 1938. In 1976, the 2nd POSEIDON was handed over to the then Institute of Oceanography, one of the predecessors of today's GEOMAR. The ocean-going research vessel served for over 40 years and was decommissioned at the end of 2019 and sold to the Protestant Church, which is now using it to rescue refugees in the Mediterranean Sea under the name SEAWATCH IV. The state of Schleswig-Holstein is now making the proceeds from the sale of the ship available to GEOMAR. With this money, the research centre, in cooperation with the Kiel University of Applied Sciences, will develop a new autonomous underwater vehicle, which will then go on a research mission under the name POSEIDON.

“In the past we have bought our high-tech underwater vehicles directly from commercial manufacturers. We only developed and integrated subsystems. Now we want to expand the expertise we have gained so far here in Kiel and design such a vehicle ourselves,” says project leader Dipl.-Ing. Marcel Rothenbeck from GEOMAR. “We have already worked together with the University of Applied Sciences in smaller AUV-related projects in the past and gained a lot of experience by operating our various autonomous vehicles. Furthermore, our Technology and Logistics Centre now has excellent workshops and new premises directly at the mouth of the Schwentine River in Kiel to build such a device,” Rothenbeck continues. Of course, building one's own vehicle will take more time than buying a ready-made device on the market, says the head of the AUV team. However, developing the device oneself not only makes sense scientifically, but also economically, since the control software and a team with practical experience are already available. This means that the project can also be implemented with the funds provided by the state.

At present, Rothenbeck says, the project is in the early planning phase, in which the first key data have been determined. For example, the AUV POSEIDON will be able to dive autonomously to a depth of 6,000 metres for several hours and collect a variety of data, analogous to the AUV ABYSS, which is also operated at GEOMAR. It will also be similar in dimensions to the AUV ABYSS, but will be operated with its own software. Various measuring instruments and sensors are to be integrated into the AUV, such as multibeam echo sounders, side-scan sonars, turbidity and fluorescence sensors and a CTD that measures standard values such as salinity, water temperatures and depth.

Marcel Rothenbeck would like to complete the design phase by mid-2021. Once the exact plans have been finalised, it is planned to start implementation in autumn this year. “Of course, we can't manage a project like this on our own. That's why we are very happy to have a competent partner at our side with the University of Applied Sciences here in Kiel. We will develop some components together within the framework of project and master's theses,” says Marcel Rothenbeck. “In the area of mechanics, we are working with Prof. Jochen Hasenpath, in system integration with Prof. Ralf Patz and on the topic of obstacle avoidance with Prof. Bernd Finkemeyer.”

“I am pleased that the proceeds from the sale of the POSEIDON will continue to benefit marine sciences in our state,” says Schleswig-Holstein's Science Minister Karin Prien. “The project shows what expertise Schleswig-Holstein already offers. This is how we support Schleswig-Holstein as a location for research and science in the long term,” says Prien.

GEOMAR Director Professor Katja Matthes is pleased about the financial contribution from the state and is optimistic about the AUV's own construction. “At GEOMAR, we have many years of experience with the operation of such complex systems. So I am confident that we will also succeed in developing our own underwater vehicle together with our partners.” Such robotic systems are important tools that will enable new insights into the still largely unexplored seafloor in the deep sea, Professor Matthes continues.

Externally, the new AUV POSEIDON will resemble the AUV ABYSS already operated at GEOMAR. However, it will be operated with its own software. Visualization: Janna Sprenger, Christoph Kersten/GEOMAR