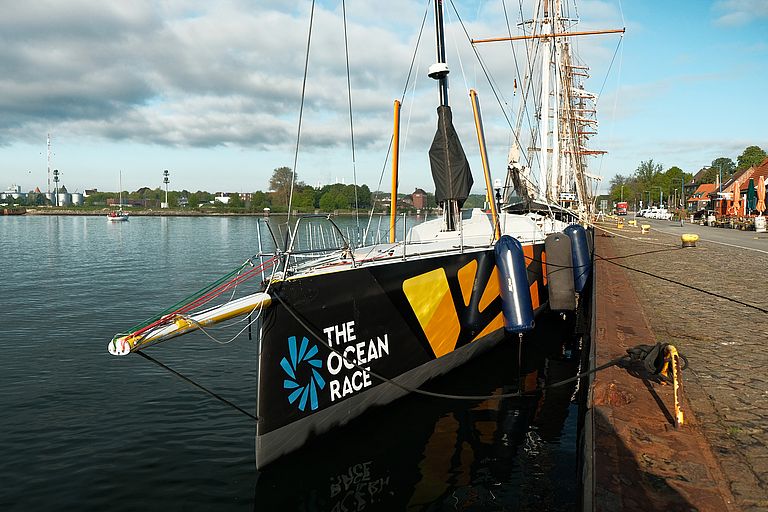 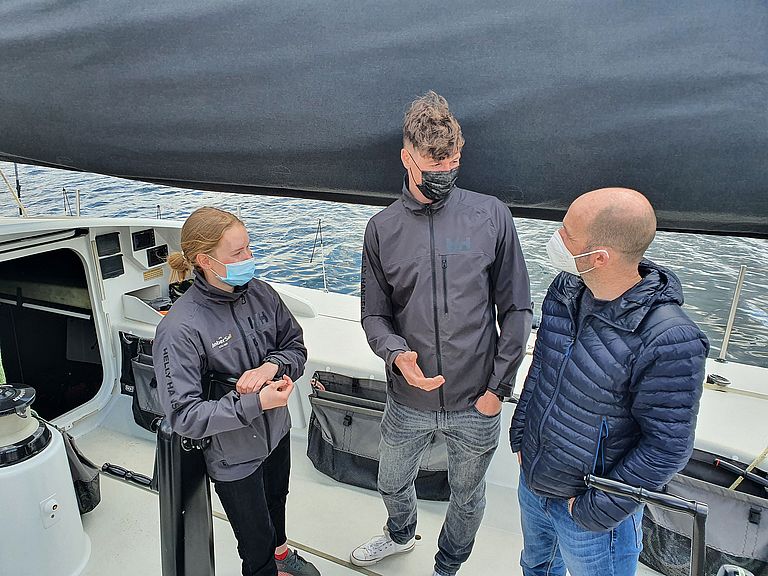 Ambersail II stops at the Tiessenkai in Kiel

20 May 2021/Kiel. In many regions, the state of the oceans is worrying. Yet much of what is going on in our oceans is still largely unknown. This is also due to the lack of ocean observations. GEOMAR Helmholtz Centre for Ocean Research Kiel is increasingly relying on data obtained during large sailing regattas. Yesterday, the racing yacht Ambersail II delivered the first samples directly in Kiel on its way to the Ocean Race 2021.

A 20-metre-long, black carbon hull, from which a single mast stretches 30 metres into the sky - next to the sleek Ambersail II, several traditional sailing vessels at Kiel's Tiessenkai yesterday looked downright sedate. The high-tech racing yacht of the VOR65 class stopped in Kiel on its way from Kleipeda (Lithuania) via Gdansk and Stockholm to Lorient in France. The stopover also had a scientific background: measurement devices to sample microplastics in seawater are installed in the hull of the Ambersail II. The crew delivered the first filter samples to Dr Aaron Beck from GEOMAR Helmholtz Centre for Ocean Research Kiel for further investigation. The samples will be analysed using a rapid newly developed near-infrared hyperspectral imaging method, so that results will be available already during the race period.

The fact that ocean-going racing yachts not only offer sporting thrills, but can also provide valuable data as sensor carriers for marine research, has been known at least since the "Volvo Ocean Race 2017/2018" around-the-world regatta. At that time, two boats, the “Turn the Tide on Plastic” and the “AkzoNobel”, carried such scientific payloads in their hulls. In 2020 to 2021, the German single-handed sailor Boris Hermann operated as a data collector while performing sailing feats in the Vendee Globe Regatta.

The Ocean Race (formerly the Volvo Ocean Race) was scheduled to start again this year, but was postponed due to COVID-19. Instead, there will be a shorter Ocean Race in European waters. Two yachts will collect microplastic samples for science, as they did in the Volvo Ovean Race 2017/18: the “AkzoNobel” and the “Ambersail 2”. "We are already examining the filters from the preliminary leg through the Baltic Sea and are of course excited to see what information the yachts will provide from the actual race legs," says. Dr Beck from GEOMAR