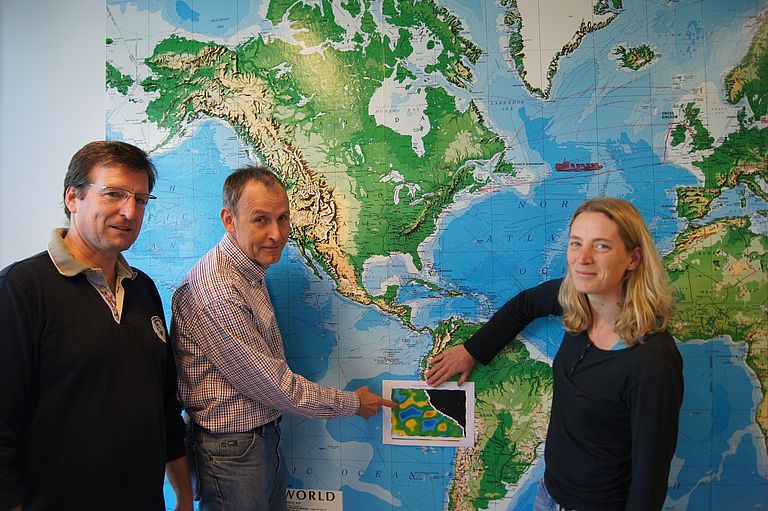 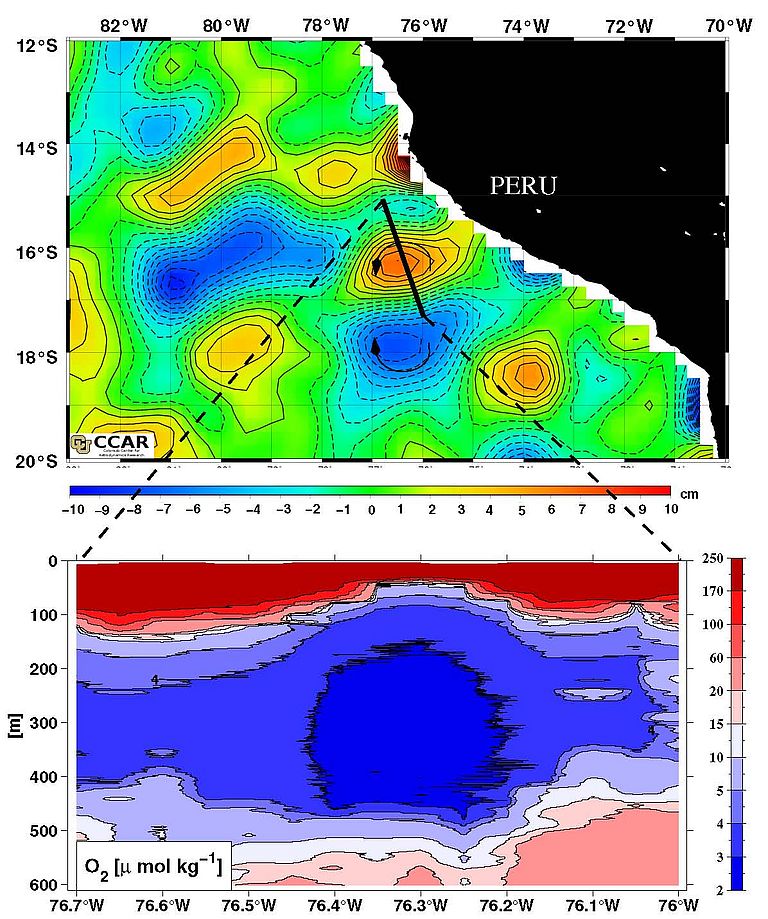 Respiratory disorder in the ocean

18. November 2013 / Kiel, Lima. More than four months from November 2012 to March 2013 Kiel ocean scientists investigated on the German research vessel METEOR the oxygen-poor upwelling regions in the tropical Pacific off Peru. First results of the project carried out in the context of the Collaborative Research Centre (SFB) 754 “Climate-biogeochemistry interactions in the tropical ocean” show, how eddies in the ocean influence the oxygen and nutrient distribution in the oxygen-poor regions. This study based on a joint work from scientists of GEOMAR Helmholtz Centre for Ocean Research Kiel and the Instituto del Mar del Peru (IMARPE) in Lima is published in the international scientific journal Biogeosciences.

Observations show that in large regions of the tropical oceans, the so-called oxygen minimum zones (OMZ), the oxygen content declined during the last decades. In addition the ocean emitted increasingly climate relevant trace gases to the atmosphere. Based on numerical models it was speculated, that small-scale circulation pattern - so-called eddies - influence sustainably the distribution of oxygen and nutrients in the OMZ’s. It is known that in the ocean, eddies with different rotation direction exist similar to high and low pressure cells in the atmosphere which can be observed as sea surface elevation anomalies from satellite data. In contrast to the atmosphere ocean eddies only have a horizontal diameter of 80 to 200 km and the rotation speed is distinctly lower with less than 30 cm/s. Due to the high heat capacity and density of seawater heat and property transport in eddies are considerably important for the nutrient distribution and hence the basis of life in the open ocean.

Guided by real-time satellite data of sea surface height anomalies three eddies could be identified in the region off Peru and intensely sampled during METEOR expedition M90 in November 2012. “Our observations show that eddies transport water with strong differences compared to the surrounding waters in temperature, salinity, oxygen and nutrients while moving westwards with a few centimetres per second”, explains the lead author of this study Dr. Lothar Stramma from GEOMAR. “As the eddies dissipate after some weeks to months anomalies of these properties are introduced as disturbances into the open ocean and hence are responsible for surprisingly high productivity in the normally nutrient-poor open ocean”, Stramma states. “Near the Peruvian shelf we observed in eddies enhanced chlorophyll concentrations as well as strong nutrient loss, e.g. of nitrate”, co-author Prof. Hermann Bange explains. During the cruise co-author Alberto Lorenzo from the Peruvian partner institute IMARPE measured pH-values of the water and hence the acidity of the ocean. He could show that the acidity of sea water, which has a large influence on biological processes, changes in eddies. In anticyclonic eddies (turning counterclockwise in the southern hemisphere) the vertical extend of water with low pH, hence higher acidity increased.

From earlier investigations of the SFB-754 it is known, that in the equatorial southeast Pacific the ‘breath of the ocean’ (the supply and loss of oxygen in the oxygen-poor regions) is carried out mainly by zonal ocean currents while the results of this study show that on the poleward side of the oxygen minimum zone of the southeast Pacific eddies are responsible for a considerably contribution for changes in oxygen and nutrient distribution. “Thus, the results are of particular importance as they help to improve model computations to better predict future expansions of low oxygen areas in the ocean” Dr. Stramma sums up.

The Collaborative Research Center (SFB 754) "Climate-Biogeochemistry Interactions in the Tropical Ocean" addresses the relatively newly recognized threat of ocean de-oxygenation, its possible impact on tropical oxygen minimum zones and implications for the global climate-biogeochemistry system. The overall goal of the SFB 754 is to improve understanding of the coupling of tropical climate variability and circulation with the ocean's oxygen and nutrient balance, to quantitatively evaluate the nature of oxygen-sensitive tipping points, as well as to assess consequences for the Ocean's future.

The SFB 754 is funded by the German Research Foundation (DFG) since 2008. This project involves scientists from the Christian-Albrechts University Kiel (CAU), GEOMAR Helmholtz Centre for Ocean Research Kiel and the Max-Planck-Institute Bremen.